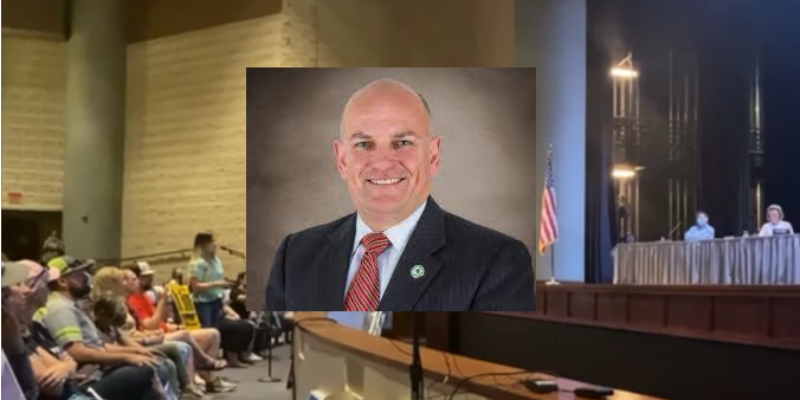 This article originally appeared in The Travis Tracker, an Austin-area conservative blog. The Round Rock public school district is one of numerous flashpoints across the country as parents and taxpayers stand up to local board tyranny but … this situation is among the worst we’ve read about. Read on to gain a better understanding of “Tea Party 2.0” and the role it may place in 2022 and ’24.

The Texas Education Agency announced the appointment of former longtime Carroll Independent School District Superintendent David Faltys to monitor the “out of control” Round Rock ISD in Central Texas.

After three years of complaints, Faltys was tapped to observe the embattled district for one year, according to the TEA letter. Faltys resigned as Carroll ISD superintendent in January after 15 years with the district.

This has raised eyebrows on the left side of aisle, as Southlake Carroll High School has been in the crosshairs of liberal-progressive interest groups after voters threw out critical race theory proponents. Left-leaning podcasts and documentaries have recently begun to paint the North Texas school and the district the poster-child for racism in predominately Caucasian suburbs. NBC News dedicated a series of stories titled “Southlake,” portraying the uprising of parents and taxpayers in a negative light.

But the selection of Faltys has been questioned by a wider coalition of parents, pro-taxpayer activists, and public ed watchdogs. According to a joint press release issued by the Round Rock Parent Coalition, True Texas Project of Williamson County, Wilco We Thee People, Moms for Liberty of Williamson County, and the Travis County Taxpayers Union, Faltys has conflicts of interest that should disqualify him from placement.

In the Spring of 2021, Faltys’s consulting company was instrumental in the locating and hiring of Dr. Hafedh Azaiez as Round Rock ISD Superintendent. RRISD paid the company $32,000 for their services, with the caveat that the company would perform another search free of charge if Azaiez is terminated or quits within the first two years.

“David Faltys appears to have a clear conflict of interest in this matter, having a financial incentive to ensure Azaiez retains his employment with RRISD for at least two years.” said True Texas Project spokesman Jeremy Story. “It is very concerning that TEA would assign a monitor to oversee and advise a district who apparently has a personal financial incentive to maintain the status quo in that district.”

Dustin Clark of the Round Rock Parent Coalition called on the TEA to “immediately remove David Faltys and assign a monitor who can perform their duties impartially, with no conflicts of interest.”

Clark and Story were arrested and later jailed by Round Rock ISD police at a September tax rate meeting for the district. Clark and Story defied RRISD police officers to take their seats in the same room as board trustees, although in-person access was limited under the guise of COVID-19 prevention.

If any of this is sounding familiar, it should. The accusations of corruption, open meetings law violations, and legal problems plaguing RRISD have garnered national media coverage over the past several months. From allegations of sexual impropriety by the new superintendent to attempts at censoring two conservative trustees, not to mention the arrests, Round Rock ISD may very well qualify for a documentary of its own. Below is a brief update.

Trustees Danielle Weston and Mary Bone have made several high-profile appeals on national cable news shows and podcasts for peace on the elected school district board. The duo are raising funds for legal defense.

Weston told The Tracker that although there is legal intervention currently taking place, her peers on the RRISD board voted 5-2 to “begin the censure process on me [and Bone] regarding three emails I sent to the Attorney General of Texas , the [Williamson County] Judge, a State Board of Education member, and some members of the public in August” regarding mask mandates in defiance of Gov. Greg Abbott‘s orders.

There was no evidence presented of any statutory violation, Weston added: “The real objective is to use me as an example to deter others from sharing their values or stepping forward and joining me on the board.”

His organization, the Travis County Taxpayers Union, had previously labeled the board members pursuing censuring Weston and Bone “the Bad Faith Five” for hampering public participation in the setting of new district tax rates.

We will continue to “monitor” the situation in Round Rock.

Interested in more news from Texas? We've got you covered! See More Texas News
Previous Article By The Way, On The Michelle Odinet Situation…
Next Article ALEXANDER: Letting Foreigners Vote In Our Elections Is New York Nonsense