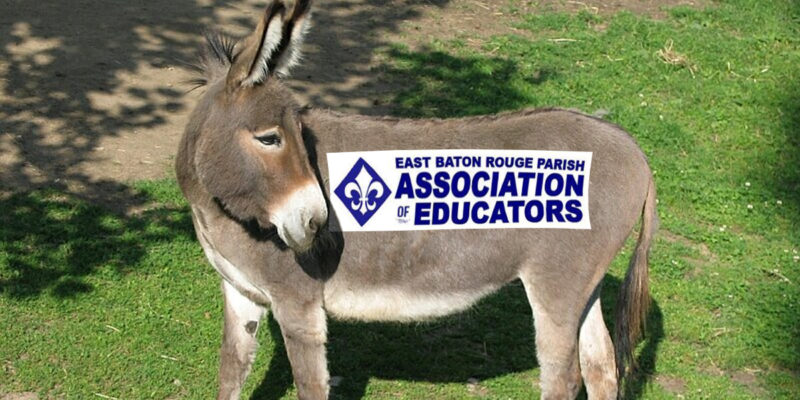 It turns out that Baton Rouge isn’t immune from the leftist idiocy teachers’ unions are fomenting across the country. Today, apparently, some 350 teachers at East Baton Rouge Parish’s generally horrific public schools are staging a “sick-out” to protest being expected to do their jobs.

Valencea Johnson, President of the EBRPAE, said the protest is to put pressure on Superintendent Dr. Sito Narcisse to convert the entire East Baton Rouge Parish School District to virtual learning until cases go down significantly.

“Today, we are demanding that the East Baton Rouge Parish School System implement virtual learning for all students,” said Johnson. “We can’t just do nothing. We have schools that are shutting every day.”

However, Dr. Narcisse feels this is not the best option.

“Not having a day in school, is not the answer to that,” said Narcisse.

In order to make that transition, there’s certain criteria that must be met. He said schools have to hit a certain positivity rate that is centered around school enrollment.

Those criteria can be found here.

Dr. Narcisse said you have to consider the other impacts of going virtual, such as LDH guidance and types of positions that would be affected.”I don’t think this is the best time to not be in school. To help support our families and our students, it’s important for us to stay in school, so we can help mitigate challenges that are happening,” said Narcisse.

EBRPAE, which is the East Baton Rouge Parish Association of Educators, is the National Education Association affiliate. As our readers know there are two traditional teachers’ unions out there and the NEA is just one. The American Federation of Teachers is the other one – the EBRFT, the local affiliate of that union, is not joining in with this sick-out.

So give the EBRFT folks a gold star for not being stupid.

We’re not going to belabor this too much, partially because our readers already know it and partially because we’d rather not warn anybody who might stop it from happening (and it needs to). But this push by some of these teacher union bosses around the country to bully school board politicians into closing those schools and doing distance learning again is the closest thing to a professional suicide mission we’ve ever seen.

Public school parents are not going to put up with a second year of their kids not learning anything in school. If they can’t put those kids in schools and expect the teachers to teach them, then you’re going to see those parents begin to demand a whole lot more convenience and user-friendly experience than any public school bureaucrats are willing to provide. And those public school parents, the more pissed off they get when teacher unions win these political fights and cause disruptions in their lives, will very shortly demand that education dollars spent on schools which won’t even perform the service they’re funded for be redirected into their own pockets.

Some Louisiana legislator will make himself or herself a name in a couple of months by bringing a bill in this year’s regular legislative session which establishes educational savings accounts, in which school funding is routed straight to the parents and can be spent as the parent directs. That could fund private school tuition, it could cover costs of homeschooling, it could fund distance learning, a microschool, learning pod…whatever. Or, maybe the old-fashioned government school could compete for the business and recapture that money.

When that bill drops, the teachers’ unions will scream bloody murder and commence to making threats. But you’re going to have a whole lot of parents vocally demanding the bill pass.

Nationally, 11 percent of the education market now consists of homeschoolers. That’s a threefold increase in the last three years. In the black community the homeschooling number is 16 percent, which is shocking considering that so many black households qualify for free lunches provided through the schools.

There’s movement out there. Public education is dying. Stupid union bosses like Valencea Johnson are killing it faster than they realize.

Interested in more news from Louisiana? We've got you covered! See More Louisiana News
Previous Article SADOW: Better Policy, Not A Wall, Is How To Fix Crime At Grambling
Next Article SADOW: Don’t Waste All Of This Federal Swag On New State Spending