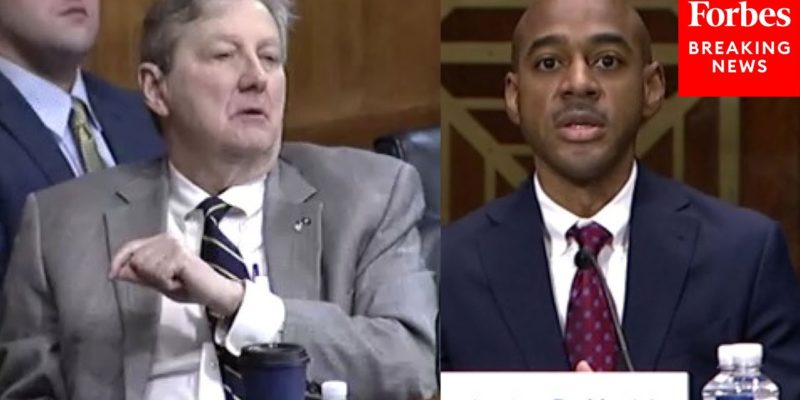 One of our guilty pleasures is to scour YouTube for video of John Kennedy, and particularly of his questioning of judicial nominees in front of the Senate Judiciary Committee.

As it happens, there’s a wealth of Kennedy video over the last day or so, and it’s a complete tour de force. We’re bringing it you for your viewing pleasure.

Here’s his questioning of Andre B. Mathis, nominee to be United States Circuit Judge for the Sixth Circuit. Mathis turns out to be not a terrible nominee, so this is a warmup.

Here he is hammering Beth Ann Williams and Sharon Franklin, a pair of judicial nominees, on the Steele dossier…

From this morning, here’s Kennedy having a go at Dick Durbin, the Illinois Democrat who runs the Senate Judiciary Committee, over the Department of Justice’s stonewalling and lack of responsiveness to Capitol Hill and asking Durbin to call a special meeting to address it.

“Sometimes when people act like they don’t care, it’s not an act.” What a great quote.

Fred Slaughter, who’s a judge on the California Superior Court, is a nominee to be United States District Judge for the Central District of California. He and a pair of other nominees, Hector Gonzales and Jessica Clarke, caught some standard questions from Kennedy – the first one of which was a classic.

It’s a brilliant question, because the Superior Court is one of the most left-wing courts in America. If you want to say that it’s systemically racist then it calls into question exactly what steps could be taken to resolve such a pervasive problem. And if you say it isn’t systemically racist then here come the questions about what makes the Superior Court different from all the other institutions accused of systemic racism.

Slaughter wants no part of the question and Kennedy lets him have it, politely, over the dodging of the question. Then he hits Slaughter, Gonzales and Clarke with the “mostly good or mostly bad” question. That one is great because you can’t possibly answer “mostly bad” if you’re trying to become a federal judge – but it has to really irritate the Hard Left to see Biden’s nominees falling all over themselves to repudiate their core contention that this is a racist, homophobic, sexist, transphobic and inequitable hell on earth which requires a political revolution a la Bernie Sanders’ stupid rhetoric to give it redemption.

Here was another question he gave to Clarke, who’s up for a district judgeship in the Southern District of New York, which is Manhattan. Kennedy makes the point that she’d get a million securities cases, so he asks her about SEC rule 10b5, which is the main insider trading rule that comes up over and over in securities cases.

To say she fails on this one would be charitable. Utter disaster.

The “thank you for the question” thing these guys all do is a mini-filibuster designed to fill up time and keep the senators from being able to ask more questions. It’s irritating, to be sure, but Kennedy’s constant “you’re welcomes” are a nice bit of comic trolling.

It’s too bad everybody in these Senate committees can’t be like Kennedy. You might actually see some real oversight if they were.

This is worth remembering now that Kennedy’s re-election race is on and he’s got a pair of Democrats in Luke “The Alpaca” Mixon, who on Monday went in front of the Baton Rouge Press Club and for 39 boring minutes blasted Kennedy essentially with a DNC boilerplate complaint about January 6 and other things, and race-hustler Gary Chambers.

Mixon did everything he could on Monday to get Kennedy to punch down on him, but Kennedy’s camp didn’t take the bait. They’re going to ignore him completely and focus on Chambers, mostly because Chambers is going to get 25-30 percent of the vote and Mixon would love to get half that. But also because Mixon is a mouthpiece for John Bel Edwards’ consultants to spew all the talking points they would have used had Kennedy run for governor in 2019 and why even entertain any of that when the voters aren’t going to be listening to it anyway.