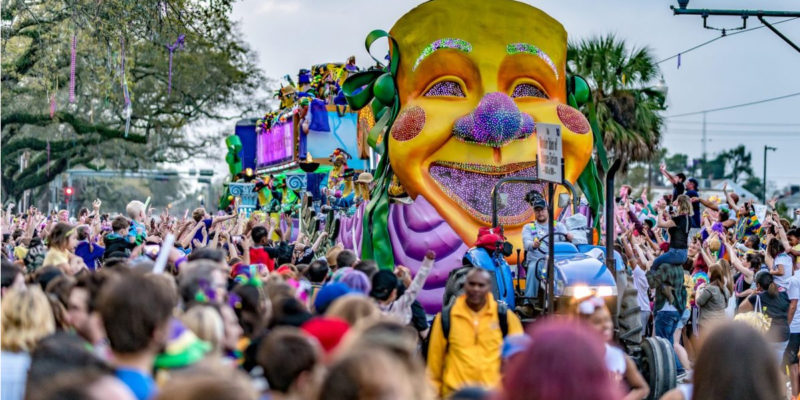 If you’re going to make a list of potential grand marshals for New Orleans Mardi Gras parades, Raymond Arroyo is a totally predictable name who’d be on it.

Arroyo is from New Orleans. He lives in New Orleans. He’s written five books and he’s the news director and lead anchor at EWTN News, the Catholic news channel, where he’s the creator and host of the news program The World Over Live. Arroyo is also a frequent Fox News contributor and he’ll guest host for Laura Ingraham from time to time.

He’s from New Orleans and he’s on TV. New Orleans people who are regularly on TV are parade grand marshals all the time.

But Raymond Arroyo is a conservative. That’s clear from his TV work and from the stuff he’s written at Newsweek, The Wall Street Journal, The Washington Times, and The Financial Times.

And Endymion named Arroyo as its Grand Marshal for this year’s parade.

“For a native New Orleanian, who waited as a child all day on Orleans Avenue for the start of this incredible parade, to be a part of the Krewe of Endymion for their first outing in two years is a supreme honor,” Arroyo said in a statement. “To me, Mardi Gras is a joyous, generous expression of our traditions and communal spirit. … Cannot wait to see you all.”

Krewe of Endymion president Dan Kelly on Sunday said the New Orleans-born Arroyo, 51, was a “very vibrant person who felt like a good choice” to lead the scheduled Feb. 26 parade through Mid-City.

“He has connections to many people here,” Kelly said.

The announcement was made Saturday night before about 4,000 people attending the Krewe of Endymion’s Coronation at the Morial Convention Center, Kelly said.

“After last year being in ‘silent mode,’ the mood last night was very exciting,” Kelly said Sunday. “The city is working hard to have Mardi Gras and Endymion is looking forward to returning on its traditional Mid-City route. We hope everybody gets well for Mardi Gras.”

And then all of a sudden along came James Gill from the New Orleans Times-Picayune. In a column which the paper put behind its paywall, Gill declared Arroyo the end of the Catholic Church and perhaps the end of America.

While Trump’s fantasies about stolen elections have split civil society down the middle, progressives and traditionalists within the church are so rancorously on the outs that the possibility of schism is being raised in Catholic circles.

This is nothing new, and, while earlier schisms have led not only to warfare but to such delights as the Spanish Inquisition, a latterday Torquemada is inconceivable in modern America. Arroyo is nevertheless a throwback to an intolerant era, according to the National Catholic Reporter, which sees him as “more akin to Cotton Mather than to any historical Catholic figure.”

Arroyo is a native and resident of New Orleans who “felt like a good choice” to lead the parade because he is a “very vibrant person” with “connections to many people here,” according to Endymion President Dan Kelly.

That Arroyo is a Catholic might be more of an advantage in New Orleans if he didn’t come across as a harbinger of schism. Pope Francis calls EWTN’s disparagement of the church “the work of the devil.”

The issues that divide Catholics will strike outsiders in the 21st century as, to put it politely, quaint. There are still plenty, for instance, who accept that they are eating the actual flesh and drinking the actual blood of Christ when they receive consecrated bread and wine at Mass. Although it is unlikely that rows about transubstantiation will break out along the neutral ground as Endymion rolls down Orleans Avenue, Arroyo’s starring role will remind the faithful of more current bones of contention.

The magisterium these days is liberal on such questions as the death penalty and the treatment of immigrants. But all liberal notions strike the church’s reactionary wing, with Arroyo to the fore, as degenerate. Meanwhile, on EWTN, as NCR puts it, “faith is always made subservient to a political agenda, a Republican and increasingly Trumpian agenda.”

Relations are no more harmonious on the secular front, where Barbara Walter’s new book, “How Civil Wars Start, and How to Stop Them,” warns that the USA is within “the danger zone” and has the commentariat in a tizzy.

Arroyo is not the first Endymion grand marshal from the world of television, but Anderson Cooper, who filled the role in 2011, was not a controversial choice, being best known at the time for news reports out of New Orleans on CNN in the aftermath of Katrina.

And then shortly thereafter came the New York Times’ Richard Fausset, who is also from New Orleans and who commonly writes pieces on Louisiana goings-on, and you can see where this is going. 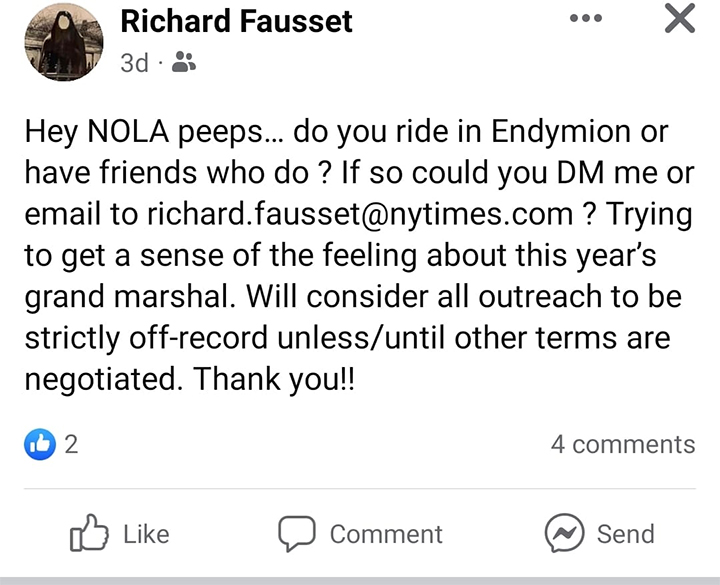 (Full disclosure: your author went to high school with Fausset. He was a perfectly cool kid, so none of this is personal.)

Gill said that when Anderson Cooper was Endymion’s Grand Marshal, which happened in 2011, it wasn’t a controversial choice.

See what’s going on here? Anderson Cooper, who’s a partisan Democrat on TV, can be Endymion’s grand marshal and nobody complains but Raymond Arroyo, who’s a partisan Republican on TV and is both from New Orleans and lives in New Orleans, is problematic enough that he gets bashed in the local paper and the New York Times starts sniffing around to write a story about how “controversial” it is that he gets to be Endymion’s grand marshal.

This has nothing to do with Raymond Arroyo, you know. It has everything to do with the psychosis of the leftists in the news media, who cannot stand the idea that somebody who disagrees with their politics would participate in the cultural life of a city.

This is where we are in society.