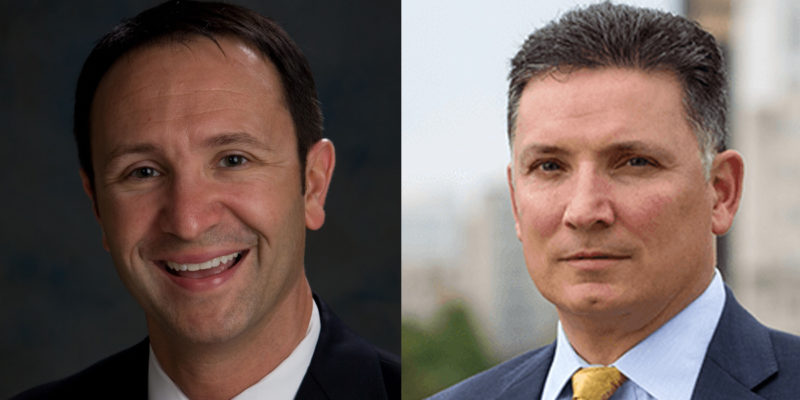 Louisiana Treasurer John Schroder, a Republican, says he is running for governor in 2023.

Schroder has long been considered likely to run, telling USA Today Network last spring, “I love being a public servant and working to instill faith in the government process is my No. 1. If you want to fix things and help people, (governor is) certainly the best position to be in.”

Schroder spent 10 years in the Louisiana House of Representatives as part of the “fiscal hawks” and carried that theme of being a watchdog for taxpayers into a 2017 special election for state treasurer, which he won.

Attorney General Jeff Landry and Lt. Governor Billy Nungesser haven’t made such announcements yet, but it’s common knowledge both are in.

All three have been raising money for a gubernatorial run for months.

Nungesser has already picked his lane in the race. He’s positioning himself as a moderate. We’ll see how that turns out for him. Schroder and Landry, however, are very clearly the conservatives in the race, and you’re going to see them fighting for that space.

We’ve already seen a little of that. They’ve jockeyed a bit on the State Bond Commission, which has actually yielded some interesting results. For example, the Bond Commission went to war against woke banks who discriminate against gun sellers.

This is going to be a common theme between the two. And there was a good example just yesterday. Here was a letter Landry sent to Schroder… 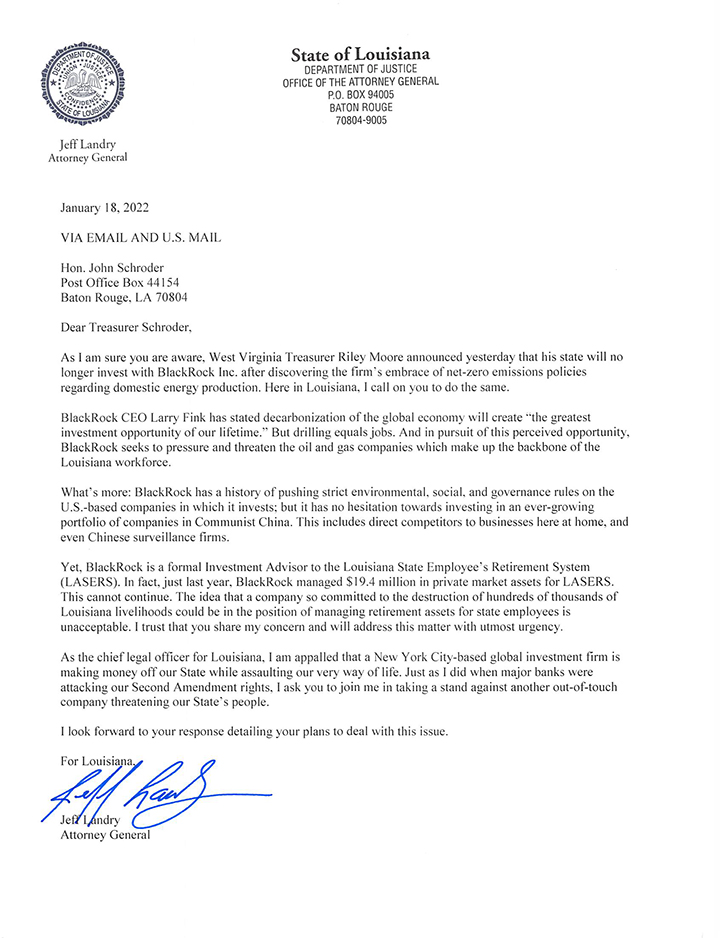 The fight against BlackRock is something which you’re starting to see among a lot of Republican officials at the state level. Earlier this week Glenn Beck was talking about this subject, and particularly with respect to what’s happening in West Virginia.

There’s a reason for this. BlackRock is the world’s largest investment firm. They have tentacles into every kind of economic activity and they’ve embraced this woke capitalist ideal whereby they expect to use the power of their financial heft to force social change.

But nobody elected BlackRock to be our corporate overlord and tell us what to do. And BlackRock’s CEO, Larry Fink, is not somebody who anybody would make president or governor. This is Larry Fink…

He’s the perfect avatar for the globalist elite crowd who think they can change the nature of the free market and alter human behavior for the simple reason they’re rich and powerful enough to make it hurt.

Larry Fink doesn’t want you to drive a car that runs on gasoline. He doesn’t want you to own a gun. Actually, he thinks you should live a whole lot like Chinese people live. That’s his vision for utopia. BlackRock has staggering amounts of money invested with the Chinese Communist Party, and those investments haven’t made China more like America – the opposite is true.

Nobody elected Jeff Landry or John Schroder to simply go along with the things BlackRock demands. The opposite is true.

So Landry is going to make an issue of getting Louisiana to resist a lot of this ESG stuff by pulling state pension funds and other such investments out of BlackRock, as West Virginia is doing. This will cause John Bel Edwards to throw a fit just like he did when the Bond Commission rejected the woke gun-grabbing banks. And Schroder is going to have to decide whether he wants to play.

There’s a certain heads-I-win, tails-you-lose character to Landry’s letter. If Schroder decides to copy what West Virginia is doing, Landry takes credit for “encouraging” him to do so. If Schroder doesn’t play along, then he’s a RINO who kowtows to Woke Wall Street.

The question is whether the voters in Louisiana, who generally do a pretty good job of sorting these things out in federal elections but vote on some of the stupidest criteria possible where it comes to state elections, will pick up on it.

Normally we’d say no, but we’re not so sure this time. There is a tremendous amount of energy out there among people fed up not just with the Biden administration (we talked about that yesterday) but with all of the other woke garbage out there. And as this has never been a particular Wall Street-friendly state, we wouldn’t be surprised to see an anti-BlackRock or anti-Woke Finance crusade gain a decent constituency around here.

Worth watching. We’re not saying BlackRock is going to be a big issue in the 2023 gubernatorial race, but we’re a bit intrigued.