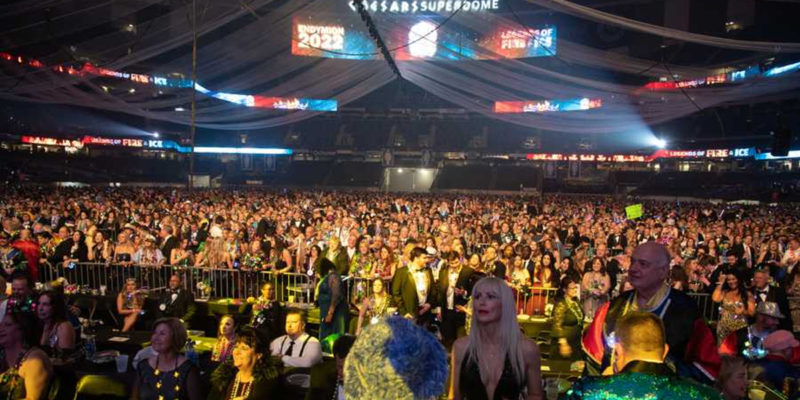 There were two good reasons to attend (if you had the connections or the dough) the Krewe of Endymion’s “Extravaganza” celebration in the Superdome Saturday night or (as I did via the Internet) watch its WVUE TV broadcast or narrowcast: its feting of author and media figure Raymond Arroyo and the rank and overwhelming civil disobedience – and the related hypocrisy – displayed.

Arroyo served as the krewe’s grand marshal. The New Orleans native, who in an interview described his selection as highly desired and enjoyable, even unthinkable when he was a child watching such parades roll by, drew controversy upon his selection. Some killjoys got upset that a guy who appears on Fox News, guest hosts the popular The Ingraham Angle show, and works for the Catholic traditionalist Eternal Word Television Network could draw the honor.

If that upset these nattering nabobs of negativity, none of that came through in the Dome. Images of joyful people abounded without a protest to be seen (or even strategically skillful throws from the crowds designed to bean him, which I observed suffered by marshals from time to time at the dozen or so Endymion parades I attended in the 1980s and 1990s).

To be more precise, images abounded of joyful people not wearing any masks. That behavior, of course, directly contravened standing orders issued by Democrat Mayor LaToya Cantrell, which mandate that anybody in indoor areas must wear face coverings. (Not counting, obviously, traditional Carnival masks that actually probably don’t provide much less protection than the poor level of almost all face coverings shilled throughout the Wuhan coronavirus pandemic.) Some people did have them on, but perhaps no more than 10 percent, and it’s laughable to write off the rest as adhering to the “actively eating or drinking” exception as the standard has it.

Nor is it likely that all of the 20,000-plus on hand met the standards of vaccination or proof of recent negative test required for presence at an indoor event like this. Few places in America have such a draconian practice, and the on-camera interviews revealed people there from Baton Rouge, Oklahoma, Ohio, and Georgia among others where no such thing exists.

And there were the out-of-town bands, not just those chock full of teenagers many unable to avail themselves of vaccination from Slidell all the way to Ohio, but also from colleges as well. By way of example, Langston University marched, and it explicitly does not have a vaccination mandate. Even as the mandate dictated that krewe organizers ensure compliance among all parade participants, it seems highly unlikely that a substantial minority of Endymion marchers didn’t meet the standard.

So, were the police out and about, demanding masking up and checking on vaccinated status? A couple of camera shots showed New Orleans officers milling about among the unmasked and vaccinated-status-unknown revelers, looking attentive but making no move to check on or cite the hordes around them breaking the law.

Which only goes to illuminate the outright hypocrisy, virtue signaling, and unmasked ideology of Cantrell, her acolytes, and fellow-travelers in the media and elsewhere on this issue. They tell us masking and vaccination everywhere crucially save lives, yet throw those platitudes out the window in direct contravention to their official dictates when there’s money to be made, as these become impediments to attracting hordes of entertainment dollars, which include fattening city coffers through sales and occupancy taxes and permitting and other fees.

This behavior exposes the real agenda behind such useless restrictions in the first place – wielding greater government power to command and control lives, using as an excuse a non-eradicable virus as common and somewhat, but not significantly, more virulent for most people than influenza to claim that authority. While on the outside the Extravaganza seemed about the usual Carnival expressions of excess, in reality it provided an even more poignant presentation of greed and lust for power that typifies the political left.

Interested in more news from Louisiana? We've got you covered! See More Louisiana News
Previous Article No, Bill Cassidy Is Not The Frontrunner In Next Year’s LAGOV Race
Next Article SADOW: Kudos To Ardoin For Dumping The Sketchy ERIC System