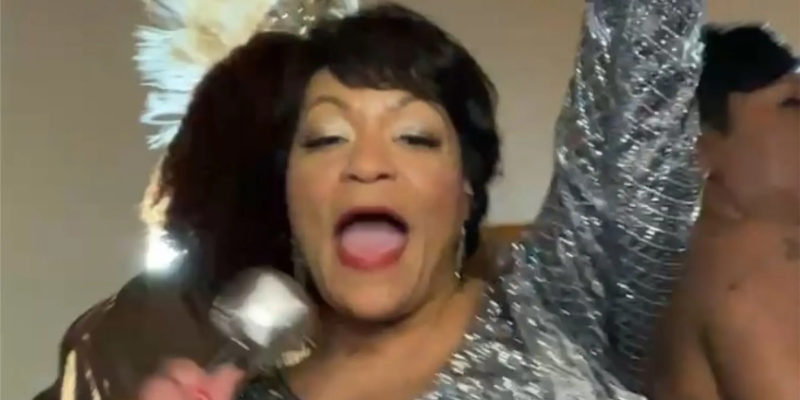 By now the hypocrisy and cynicism of left-wing political hacks like Gavin Newsom, Gretchen Whitmer and Gil Garcetti is no longer news. But the revelations from Friday night’s Mayor’s Ball in New Orleans, where that city’s grand poo-bah LaToya “Teedy” Cantrell appeared maskless in violation of the COVID restrictions she’s imposing on ordinary citizens of that city, deserves mention.

Especially now that national media organizations are picking up on it…

One hundred short videos taken at the Mayor’s Mardi Gras Ball at Gallier Hall were posted online before they were deleted following Fox News’ inquiries Monday. The videos, taken by a 360-degree photo booth, showed Cantrell singing karaoke maskless with two other women, who were also without masks.

Not a single person wore a protective facemask in the videos, which were taken down less than an hour after Fox News requested comment from Cantrell.

The event comes after Cantrell reinstated the city’s indoor mask mandate for all indoor public settings, including schools, which is still in effect through Mardi Gras Day on March 1.

These people are so stupid it’s amazing. It’s as if they think they can cover up this rampant, pathetic hypocrisy once those videos hit the internet.

Or as if the still photos aren’t everywhere…

Nearly 100 short videos of Mayor Cantrell and guests partying without masks have been deleted following the Mayor's Ball over the weekend. https://t.co/GERONJmSj2

She needs emergency powers bc New Orleans is in an EMERGENCY guys. pic.twitter.com/YBeFftJneo

At this point we’re actually having trouble summoning up outrage over this, for a number of reasons. First, it’s not like we could have a worse opinion of Teedy Cantrell. She’s a double-figure IQ, morally retarded slimeball leftist who can be counted on to do the dumbest, most counterproductive and evil things available to her, and she has been since before she was made mayor of that place.

Second, Teedy just got re-elected with a massive landslide last fall. Nobody of any political stature bothered to run against her, which indicates that Teedy is not only what New Orleans deserves but what it wants.

And third, nobody in an adult position in state government gives a damn. The state of emergency that New Orleans is under courtesy of Cantrell’s order could be lifted by either house of the state legislature by petition, and yet there is no effort to overturn it. The idea that after Friday’s maskless ball it wouldn’t be an absolute no-brainer for New Orleans’ emergency to be lifted by the legislature is puzzling; why on earth wouldn’t you have 68 Republicans in the House and/or 27 Republicans in the Senate rushing to sign a petition taking her toys away? That’s an obvious political win every one of those legislators’ constituents would reward them for.

But it’s indicative of the kind of leadership the legislature has that no such petition is circulating now. It’s five days after the event and less than a week until Mardi Gras and nobody has done anything.

So if they don’t care, neither do we. Teedy taking the mask off her COVID hypocrisy is hardly the worst thing happening in a city which suffers five carjackings a day as it devolves into a state of nature. We’re done with New Orleans and we’ll never go back. And anybody who lives there still is going to struggle to get any sympathy from us. They haven’t built a wall like East Berlin did, so just get out – if you don’t, then don’t complain about the awful governance that you’re openly tolerating.