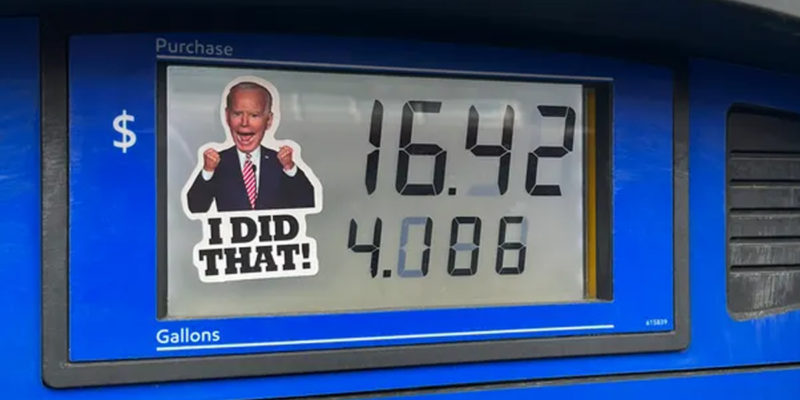 In an effort to punish Russia for its invasion of Ukraine, Pres. Biden, by executive order this past week, banned the importation into the U.S. of oil and other energy sources from that country.  What this means is that no new Russian shipments of oil, liquified natural gas, coal, or various other petroleum products will be allowed into the U.S.  Obviously, this will immediately drive gas prices higher than they even are right now.

Further, the misguided policy of America buying Russian gas from a criminal dictator will, in fact, not end for 45 days after the implementation of the order.  In effect, this means that for 45 days after this announcement, we will continue to pay war criminal Putin, a serial murderer and perpetrator of war crimes, for roughly six hundred and fifty thousand barrels of oil per day at a rate of significantly over $100 a barrel which amounts to between 60 and 70 million dollars per day of American money—which will continue to fund Putin’s War Machine against innocent Ukrainian men women and children.

The question is not whether it’s a good political or foreign policy decision to ban the importation of Russian oil and natural gas into our country in response to its brutal and unjustified invasion of Ukraine. Of course it is.  The fundamental question is—knowing as we do that energy security is national security—why we are dependent on Russia or any other country for our energy in the first place.

In Pres. Trump’s last month in office, Jan. 2021, America was producing more oil than it was consuming for the first time in 50 years and was exporting energy to the EU.  The Trump Administration had made America energy independent, meaning we not only were providing for our own national energy needs but, in fact, had become a net exporter of energy to other nations who are also vulnerable to Putin through the consumption of Russian oil.

However, under the Biden Administration we’ve gone from energy independence back to dependence and are now reduced to begging Venezuela, Saudi Arabia, OPEC and perhaps even our archenemy, Iran, for oil. Why?  Mostly to satisfy the green energy delusions of the Climate Change religionists. That’s an embarrassing and untenable position for the world’s only superpower to be in.

The easiest and fastest answer is what, in addition to giving hope to millions of struggling American citizens, will drive the domestic energy market up.  Have President Biden announce that we are going to reopen and re-invigorate the U.S. oil and gas industry.  Repeal all so-called “green” regulations prohibiting the production and development of American energy.

The Biden Administration could make permits faster and easier to secure and make capital and financing available for energy exploration, rather than allow the hostility of the Labor Department which requires investors to consider the “impact of climate change on their investments”; or the Securities and Exchange Commission (SEC) which is expected to issue a rule soon requiring companies and their equity partners to publicize their carbon emissions.  (It’s worth noting that President Biden has now nominated Sarah Bloom Raskin to be a top official at the Federal Reserve.  Her primary goal, reflecting her disdain for fossil fuels, is to try to use financial regulations to force capital away from fossil fuel investment and into green energy.).

In light of all of this, it is amazing that any oil and gas development or production occurs in the U.S.

Obviously, the best decision now would be to boost America’s energy security–and, again, energy security is national security—by taking the brakes off of our domestic energy industry including taking steps such as restarting the Keystone pipeline and ending all the attempts to block new lease sales in federal areas.

One possibility is reviving the shale industry—including our Haynesville Shale—because shale producers are able to get moving more quickly.  “Shale fracking, unlike traditional drilling, can increase production quickly, producing in a matter of months rather than the years it can take for the “old school” way of drilling oil.” (Money & Markets, Shawn Ambrosino, 3-7-22).  This, of course, would require the rapid procurement of oilfield workers, equipment, and materials.

In a perfect world, we could perhaps snap our fingers and transition ourselves to a carbon-free world.  However, that’s not the world we live in.  The world we live in is not going to be able to be free of fossil fuels for decades if not generations.  Renewable energy sources can’t come anywhere near meeting America’s energy needs right now.  In the meantime, the self-inflicted harm the Green leftists are doing to our country is increasing the leverage over us of Russia, China, and Iran, making us vulnerable and compromised.

This anti-American policy madness which seeks to unwind modernity must end before it is too late.