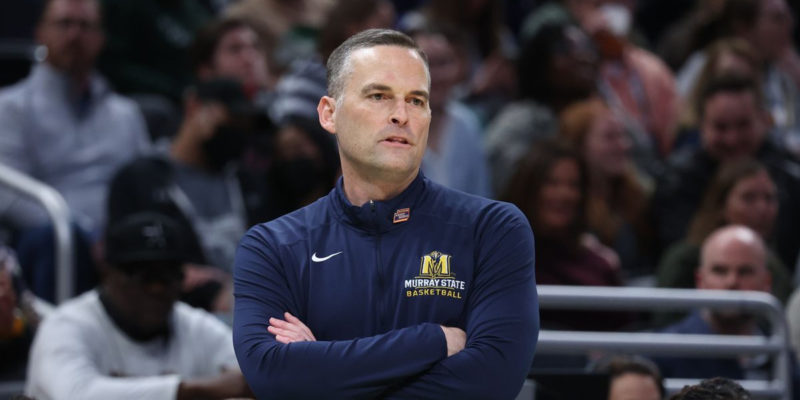 The short answer is not really. That isn’t a criticism of McMahon, who put together a tremendous season at Murray State this year and has won at least a share of the Ohio Valley Conference four of the last five years (a 13-13 mark last season seems to have been an outlier for his career).

He’s LSU’s new coach, with an announcement to follow soon.

LSU has found its next leader of the men’s basketball program. The Tigers will hire Murray State’s Matt McMahon to take over a program that faces a very uncertain future according to ESPN’s Pete Thamel.

McMahon is from that same cloth as former coach Will Wade several years back as a mid major coach looking to make the jump to a bigger program with more resources. Over his seven seasons at Murray State, McMahon had a 154-67 record, leading the Racer’s to three NCAA tournament appearances, including a Round of 32 appearance in 2018-19 led by point guard Ja Morant.

Morant went on to be a No. 2 overall pick and is one of the NBA’s brightest young stars, pointing to McMahon’s ability to find hidden gems in recruiting. Bringing in a coach who has a great track record of finding really good players who aren’t necessarily “highly touted” recruits is a positive for a program that will be looking to rebuild.

LSU has already lost signees Julian Phillips, Devin Ree and Marvel Allen and the assumption is the current roster is likely to be gutted as well. How McMahon  approaches the transfer portal and talent in upcoming class will say a lot about just how far the Tigers fall in the first few years.

Moving this quickly on a new coach is likely a smart move in terms of getting on the phone with the current players and trying to convince them about potentially sticking it out. The Tigers have a lot of young talent including, Efton Reid, Brandon Murray, Alex Fudge, Eric Gaines, Justice Williams and Adam Miller.

There is a pretty good argument to be had here about what kind of coach LSU needs to replace Wade and whether McMahon fits the bill. Before we get into that, let’s stipulate that Matt McMahon looks like a perfectly good coach who in a normal context should generate a good bit of excitement for LSU fans. Here’s his yearly record as a head coach at Murray State…

You could say that coaching at Murray State is a little bit different than a lot of other mid-majors, since that school has had a tremendous run of success. McMahon didn’t build Murray State, after all – they’ve had a string of coaches win big in their league and move up to major schools since the 1980’s, including Matt Gottfried, Mic Cronin, Billy Kennedy and Steve Prohm.

That said, McMahon’s first two years in Murray were largely rebuilding years. He came into a name program, but he had to retool it to get it back to a championship level.

Then, after his first batch of really good players moved on and he had to rebuild, he did this year with an even better team than he had with Ja Morant. And LSU apparently outbid South Carolina to hire McMahon, so obviously he’s a coach in demand.

Everything about that resume checks out. McMahon comes off as intense and professional; he’s a classy guy who’s a great speaker and should represent the program very well at a time when things could be very ugly depending on what the NCAA will do to LSU.

The recruiting class is already wiped out with Julian Phillips, Devin Ree and Marvel Allen flying the coop and Yohan Traore almost certain to join them. That means LSU is likely going to have to pick through the transfer portal in order to find help, and there’s a great amount of uncertainty as to what kind of scholarship restrictions are coming thanks to the NCAA’s likely sanctions.

How many players can LSU keep on next year’s roster? It probably won’t be 13. With Darius Days and Xavier Pinson both finishing their eligibility and Tari Eason projecting as a first round pick, you’re looking at 10 potential returning players. Shareef O’Neal and Efton Reid are your headliners in the post, though Reid is going to be a priority to keep around since he’s got potential as a top player down the road. Jerrell Colbert and Bradley Ezewiro were seen as likely transfers; now, they might be priorities to keep since LSU is going to have trouble recruiting if the sanctions regime is what some are saying. Then there’s Mwani Wilkinson and Alex Fudge, both of whom are key players to keep and develop but they’ll be in demand as well. Brandon Murray is a future star whom everybody will want, Eric Gaines is an interesting doppleganger for Morant and maybe that’ll induce him to stay and Justice Williams is a guy you’ll want to hold on to and develop.

How many of those guys can McMahon keep? And what’s he going to be able to add to that core? What’s the NCAA going to allow him to add?

The thing is, getting a big eye-popping name to replace Wade would be seen as the best bet to hold those players.

But maybe getting a big eye-popping name wasn’t possible. Or maybe some of the big eye-popping names would carry a stink as large as the one attached to Wade, and that wouldn’t help mitigate the NCAA scourge to come. You couldn’t exactly bring in a Rick Pitino or Sean Miller and then say your compliance issues are in the past, you know. LSU went with a mid-major coach moving up, which is the normal, conventional way to go. Get the right guy and you end up with a program-builder who can be your coach for 20 years and have a statue outside of the arena.

Get the wrong guy and he’s a four-year forgettable footnote.

But McMahon is nonetheless impressive, and in normal circumstances you’d say he’d do well at a place like LSU where the resources are quite good.

Is McMahon impressive enough to re-recruit LSU’s current roster? It’s hard to say. He’s a good coach and that’s obvious, so sure – he might be able to sell these guys on staying.

Is he impressive enough to recruit at a level similar to what Wade was doing?

Matt McMahon’s history at Murray State is not one characterized by high-level recruiting. You don’t do a lot of that in the Ohio Valley Conference, of course; when you can get high-level players they’re generally made, not born (as Morant and this year’s stars, 6-10 forward KJ Williams and 6-5 guard Tevin Brown, were), or perhaps you get them through transfers. But the highest-ranked player McMahon has recruited was shooting guard Braxton Stacker out of St. Louis for next year, who’s No. 289 in 247 Sports’ rankings for the 2022 class.

What this means is McMahon is unlikely, particularly with the NCAA stench surrounding the program, to reel in the Naz Reids and Jevonte’ Smarts and Tremont Waterses of the world to bring LSU back to relevance. It’s going to be transfers and developmental players for at least a couple of years.

If he hits on the right guys, that might be fine. Especially if McMahon can keep the current roster together. Six or seven of the current guys are legitimately developable into NBA players with enough time and focus and luck.

But if not, and he has to start over completely, this is going to be a long slog and McMahon’s personal brand, coming from a mid-major school, might not be enough to change LSU’s now-damaged brand in front of the big-time recruits out there. Particularly if he’s stuck wading through scholarship restrictions and limits on the number of signees he can take.

We’re rooting for McMahon, to be sure. As fun as the Wade era was and as questionable as the decision to dump him before the NCAA Tournament this year may have been (the Iowa State team taking advantage of LSU’s poor performance in the first round Friday night is now in the Sweet Sixteen, which makes one wonder what might have been if the school’s Powers That Be decided to just let the season play out and then make a change), it’s unquestionable that a black cloud hung over the Tiger basketball program. And the “us against the world” thing did get exhausting when every game was a slog through questionable officials’ calls, media demonizations of LSU’s coach and program, and other slights.

McMahon offers a credible possibility of escaping that and getting LSU to a position of consistent relevance. He’s a good enough coach to do that, and he seems to have a strong eye for talent and player development. The question is whether he’s got enough coaching and recruiting firepower to lift LSU past the mess it’s in.

Especially if the current roster isn’t interested in starting over.