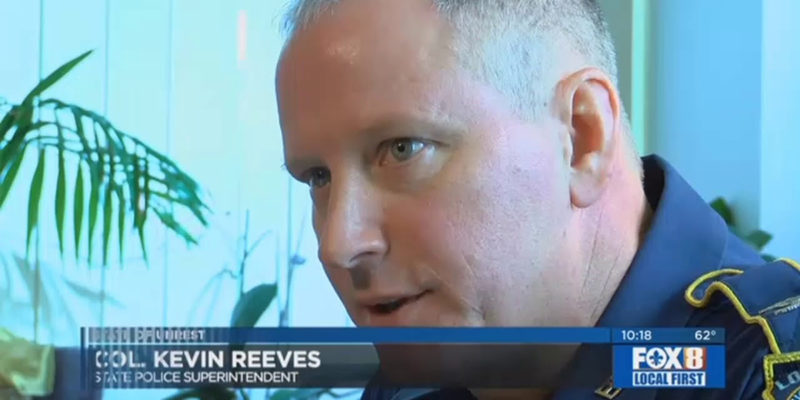 The Louisiana Legislature has launched hearings into the incident, where in May, 2019 Ronald Greene died in LSP custody. He led LSP units on a car chase, ending with a minor wreck, only afterwards to be restrained in a dangerous fashion that included a severe beating, whereupon he died while being transported away from the scene.

Plenty of suspicious LSP activity followed, from its telling the Greene family that he had died in an accident despite media reports only hours after the incident relying on the original (now deleted) news release, body camera footage going missing, apparent obstruction of internal investigations that led to firing impartial investigators, suppressing any information about this and, most egregiously and running counter to procedures, erasing text information exchanges among top department officials during the period where the incident would have been discussed.

While eventually this all became public knowledge, testimony at the hearings reiterated and expanded upon the evidence that LSP’s behavior was less than salutary.

The newest information came from Reeves, who retired suddenly in 2020 just as much of this information started becoming public. Like Edwards, Reeves disclaimed having any real knowledge about the incident and its investigation, echoing Edwards in saying he left just about everything up to subordinates.

This assertion was as unconvincing as when Edwards invoked it in a news conference last month. Reeves had sent Edwards a message informing him of the incident, and a governor’s staff would have monitored the media over the next few days to learn already allegations of brutality levied by the family and earwitnesses had surfaced. No governor with any business claiming to lead a state would have disregarded that information, willingly keeping himself in the dark, but far more likely would have instructed his staff to keep close tabs on the investigation – as Edwards’ staff did months later when the matter was forwarded to the U.S. Department of Justice that still investigates it – and it’s inconceivable that Reeves wouldn’t have done the same with a potential major scandal brewing under his administration.

Lawmakers seemed very skeptical about his level of disengagement and repeated assertions that this typified Edwards as well so that there never was a conspiracy to cover up trooper misconduct – even as reports were rendered and discipline meted out hidden from public scrutiny. He also echoed Edwards in another way: an insistence that the crash played a significant role in Greene’s death.

Almost as if they got together and decided what story to tell, based upon denying and denying again any effort by the LSP to keep the incident quiet, from Edwards’ perspective at least to prevent political damage possibly before his 2019 reelection bid or after.

However, Reeves indicated he had one more card to play, if necessary.

During the hearing he revealed that he had kept a journal with contemporaneous notes even after retiring as LSP superintendent, saying for the meantime he had no intention of making it public. It would seem odd that if he supposedly wouldn’t have it contribute to the investigation that he even would let the world know about it.

But he did – because, make no mistake about it, he meant to send a warning to Edwards.

That being, if Edwards didn’t bend over backwards to keep Reeves in the clear, as Reeves was doing with Edwards by providing crucial backup to Edwards’ allegations of his next-to-no involvement or even curiosity in the matter, Reeves had something that could spill the beans potentially showing Edwards took a more active role in suppressing or keeping quiet or misdirecting any investigation. In essence, with that revelation Reeves threatened Edwards either to sustain their omertà or information Edwards might not want made public could become that.

This isn’t over, despite Reeves’ and Edwards’ demurrals and deflections. Legislative inquiry could be only the first step towards impeachment for Edwards, but with Reeves gone (and his actions possibly part of the federal investigation that could charge him with a crime) and the clock ticking on Edwards’ term, it may depend upon just how much appetite legislators have to see some kind of justice delivered.

Interested in more news from Louisiana? We've got you covered! See More Louisiana News
Previous Article You Should Be Disgusted By Melissa Flournoy, And You Likely Are
Next Article Matt McMahon Replaces Will Wade At LSU. Are We Happy?