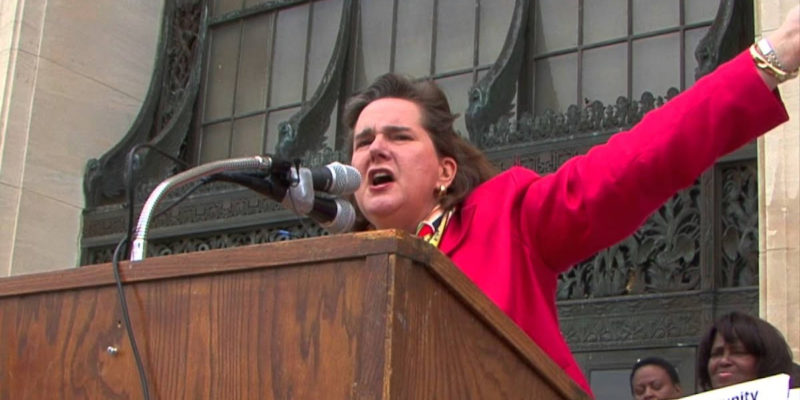 It isn’t a normal practice for us here at The Hayride to opine on letters people send in to The Advocate. The truth is, we don’t spend all that much time on South Louisiana’s monopoly newspaper; we think it has edged out the New York Daily News for the title of Worst Newspaper in North America, and the best remedy for that is to completely ignore that abominable fishwrap. But that said, we do try to keep our finger on the pulse of the state, and when this morning our inbox contained multiple messages seething about Melissa Flournoy we had to pay attention.

It’s like Michael Corleone said: everything time we think we’re out, they pull us back in.

Flournoy is one of the Usual Suspects who hangs around the Louisiana State Capitol, or she used to be. She at one point headed the Louisiana Association of Nonprofit Organizations, but the most expositive of the jobs she’s held was her time as the Louisiana state director of Planned Parenthood of the Gulf Coast.

Melissa Flournoy, in other words, is one of those sick people who thinks it’s her mission in life to abort as many children as she can, and she goes out of her way to trash the large majority of Louisianans who see abortion as the killing of innocents.

Common sense is in retreat at the Louisiana Legislature as too many legislators want to fight a culture war on women, transgender kids, truth and history.

The NCAA women’s swimming championships were just dominated by a six-foot-four man whose penis was visible through his swimsuit, but “common sense” is under attack by legislators who are attempting to keep this kind of lunacy from making its home in Louisiana.

Efforts to eliminate access to reproductive health care including contraception and further outlawing abortion are attacks on women.

“Reproductive health care” is a term some Planned Parenthood hack cooked up a few years ago to obfuscate what actually happens at the abattoirs that organization runs and funds. Watch an abortion or see its products and lots of things will come to mind, but “health care” isn’t at the top of the list. Anyone who uses that wholly dishonest term is marking herself as non-credible.

Which is what Melissa Flournoy is. Particularly when she claims that attempting to protect unborn children from being chopped apart inside the womb, and their organs being sold for scientific experimentation, constitutes “attacks on women.”

Baby-killers like Flournoy have for years attempted to make the link between offering dirty deeds done dirt cheap to women who find themselves with inconvenient pregnancies by whatever reason and support of the entire female sex. It’s always been a poor argument, but it’s one which offers naked emotionalism – something stupid people and leftists, if you’ll forgive the large-scale redundancy therein, can’t get enough of.

When Planned Parenthood branched out from abortion to doling out puberty blockers to confused kids who think they might be suffering from gender dysphoria (aided in no small measure by a corrupt public education bureaucracy and a psychiatric profession which is barely a step ahead of phrenology in its scholarly discipline), it should have become clear to most people that this is not an organization aimed at promoting happy, healthy Americans.

Planned Parenthood doesn’t have any abortuaries in Louisiana, that’s true. Instead it just funds them and refers clients to them. They’ve been running this dodge for decades; what’s amazing is that they think anybody believes it. If they’re trying to reduce the need for abortions, then how come they don’t fund any care pregnancy centers?

We need to trust educators and support education for the 21st century. Educated citizens need to be aware of efforts to rewrite history, pretend that racism and misogyny are not issues and that everyone always had the same opportunities for economic success.

Rewriting history – you mean like the 1619 Project and the rest of the Critical Race Theory fabulists do? Nobody has said racism and misogyny don’t exist, but if anything the most obvious racism in America can be found on Joy Reid’s MSNBC show directed at white and “white-adjacent” Asians, and it’s patently obvious that misandry, rather than misogyny, is on the march in American culture.

Unless you want to factor in the intrusion of men who feel like women into things like the USA Today Woman of the Year award, or Lia Thomas.

We need to recognize that there are many LGBT people in Louisiana who deserve rights and protection against discrimination. Parents of children who may be gay or transgender deserve to make health care decisions and not be stripped of their rights.

Notice that she doesn’t cite any specific legislation to support her accusations of Louisiana’s “culture warrior” legislators taking away people’s freedoms. If she did and people actually read the bills they’d realize this is all a grift. Nobody’s “rights” are being stripped away if, for example, the Legislature passes a bill which says parents shouldn’t decide to put their kids through a sex change. You can wait until you’re 18 to make that decision for yourself, and then it’s going to be your responsibility when, like more than 40 percent of post-op transsexuals, the monstrosity of what you’ve done to yourself and its failure to correct what was wrong with you all along leads you to attempt suicide.

But since Planned Parenthood is now profiteering off trans kids, of course it’s a civil rights issue that leftists are allowing and encouraging our youth to mutilate themselves.

We need 10,000 women to make their voices heard demanding action to make Louisiana a place where young people want to live, work and raise a family. Serious problems require savvy, serious, committed people working on reducing poverty, improving the economic self-sufficiency of families, promoting equal pay, access to health care, healthy babies and healthy families, improving education, promoting economic development across the state to meet the needs of the economy of the future with renewable energy — not just focus on the past and fighting a culture war. Let’s focus on the future and solve our real problems.

This last part is a promo piece, because Melissa Flournoy just started up an organization called “10,000 Women Louisiana” which promotes all the awful nutbaggery of the Left. It’s under the umbrella of a Usual Suspect outfit called Louisiana Progress, which is exactly what its name suggests it is if you’ve never heard of it – a left-wing gaggle pushing all the usual Marxism, economic and cultural. They’re always at the Capitol and they’re always pushing insane California-style radical policies.

It’s all a grift. Melissa Flournoy is a professional grifter. None of this is particularly interesting.

But here’s what is interesting. We had several mentions of this opinion letter hit this morning, and the fury of those reactions was palpable.

And it’s something we’re noticing more and more.

Ordinary people are absolutely fed up with grifters and liars like Melissa Flournoy. They’ve seen what happens when they’re in charge, they’ve seen the damage and destruction they wreak, and it isn’t funny anymore.

Melissa Flournoy and her baby-killer friends have overseen an America in which birth rates have plummeted. Thankfully abortion rates are down, which is why Planned Parenthood has diversified to new – and worse – cultural aggressions. But family life in America has rapidly fallen off. Communities most affected by Planned Parenthood – like, for example, the black community, where its own and its affiliated abortuaries are disproportionally located – are in crisis. Only one quarter of adult black women in America are married at present, which means most of them are going to die alone. It goes without saying that’s true of most of the men as well, but Melissa Flournoy cares as little for men as they care for her.

We’ve seen what happens when they’re put in charge but our rejection of it is then castigated as “attacks” by people like Melissa Flournoy. If you recognize the insanity of her worldview and the lack of ethics in her making a livelihood out of grifting for out-of-state grants to do damage to the lives of Louisianans, she’ll call you a hater and a bigot.

That’s how the scam works.

But it’s over. Nobody’s interested anymore. The time for the Melissa Flournoys of the world is ending. Try as they might, the editors at The Advocate can’t stop that.