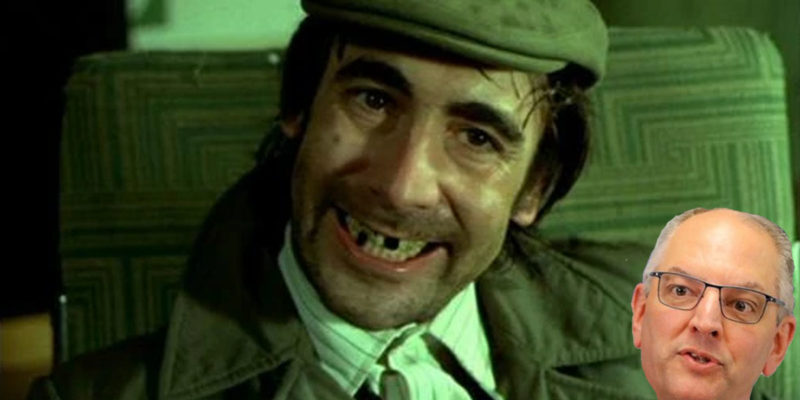 It’s an utter and absolute lie being perpetrated on the public that Florida’s Parental Rights in Education Act is being called the “Don’t Say Gay” bill. The bill isn’t a gag order for schools to neglect homosexuals as it’s being portrayed. What it does is to protected kids as young as four and no older than eight from being taught about homosexuality and transgenderism by people paid by that state’s taxpayers who have a strange and perhaps nefarious desire to do so.

The Left has gone completely insane over the Parental Rights in Education Act, but DeSantis and the Republicans in the Florida legislature haven’t budged. That’s good, because anyone who believes it is the proper role of kindergarten teachers to instruct five-year-olds in transgender theory is…well, we’ll let Allie Beth Stuckey handle this one…

Exactly. Who the hell are these people? They come off like the Uncle Ernie character in Tommy, the one who likes to “fiddle about” with small children.

As today’s Quote of the Day notes, Kurt Schlichter recognized what an utter disaster the Left’s response is to the Florida anti-grooming bill…

You gotta hand it to a guy who convinces Democrats to die on the hill of defending perverted groomers talking about sex with little school kids. It’s on-brand for their fellow travelers at The Lincoln Project, but you would think that Democrats actually want to win elections. But no – they want to make the schools safe for pedos, and they don’t care who knows it. But they’ll care plenty in November when parents around the country come out and vote for The Party of Not Hitting on Der Kinder.

This “Don’t Say Gay” thing is a clever deception, but the problem is that legislation involves a process – and a process means people ultimately find out what’s in a bill. When they also find out they’re being lied to, they turn on the liars.

That’s something Louisiana’s media ought to be cognizant of, because the anti-grooming fight is coming to Louisiana. Rep. Dodie Horton, a Republican from Haughton, is the author of HB 837, which goes a little further than the Florida bill does. Its ban on teaching gay and trans theory doesn’t just run through third grade; it goes through eighth grade. And it also bans teachers from “coming out” as gay or trans in front of their students all the way through high school.

The latter piece is very much an anti-grooming effort. A teacher who outs himself or herself with a particular sexual orientation in front of a class of students is fairly likely doing so in an effort to encourage them to embrace that orientation if they’re thinking about it. And while you can say that’s a First Amendment matter, remember – this bill is about public schools. Meaning that if you are such a teacher you’re being paid by Louisiana taxpayers. Horton’s bill is an expression from those taxpayers that we aren’t interested in paying for teachers to tell kids about how they’re gay, or trans, or demisexual or whatever other woke new sexualities they might cook up.

Here’s what one of those episodes looks like, by the way…

4th grade California teacher films herself coming out as trans to her students: pic.twitter.com/y88ri738bL

There’s a great use of classroom time, no?

Just over a week after Florida legislators passed a controversial bill regulating the discussion of sexual orientation in classrooms, a Louisiana lawmaker has submitted a similar proposal.

“I wasn’t aware of the need [for this legislation] until I looked at some things on Twitter and Facebook,” Horton told WBRZ Thursday. “It just solidified for us to protect our Louisiana children, as well.”

The proposal echoes recent legislation passed in Florida—coined the “Don’t Say Gay” bill by its opponents—that stirred up controversy nationwide and was harshly criticized by pro-LGBTQ groups.

“I started to pray about how we could protect our children here from inappropriate conversations until they are able to dissect it and old enough to understand it,” Horton explained. “I talked to my pastor and he challenged me and said, ‘we definitely need to do this.'”

And here was John Bel Edwards, who yesterday got to see the logical progression to absurdity in real life of his veto of a bill to protect female athletes from invasion by men when a six-foot-four male named William Thomas won the 500-meter freestyle race at the NCAA women’s swimming championships, commenting on Horton’s bill Monday…

“Some of the bills being brought up this session do nothing to make lives better. Nothing to continue moving us forward. They only serve to divide us. And frankly, some are reminiscent of a dark past that we should learn from, not relive.”

Edwards will veto Horton’s bill, just like he vetoed Beth Mizell’s girls’ sports bill last year and will veto it again. But he’s the one out of touch with the people of Louisiana, and he’s the one dividing people and doing nothing to make lives better. He’s certainly the one doing nothing to move Louisiana forward – there is nothing forward about grooming kindergartners to abandon their biologically assigned sex and descend into a mental illness. Some 40 percent of post-op transsexuals attempt suicide – that’s the rate for those who get what they think they want.

It’s good that we have this fight. It’s good that we have it in Louisiana after DeSantis and Florida has blazed the trail and showed the cultural Left for the unhinged lunatics and monsters that they are. We should absolutely force them to show the same here, whether Horton’s bill can become law this year or not. The people of Louisiana need to know exactly who their leaders are and who they aren’t.

The debate on this bill will show, just like the debate in Florida has showed and the debate on Mizell’s girls’ sports bill showed last year, who the monsters are. It’s important that the lights are kept on.