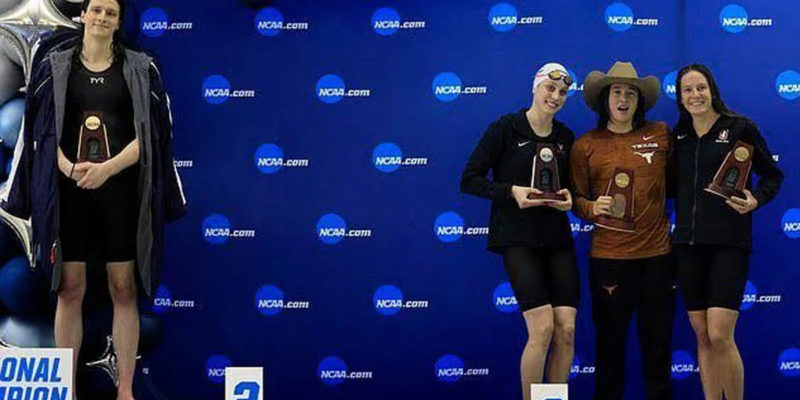 Yesterday, a dude – a six-foot-four fully intact biological male who is by all accounts quite capable of impregnating a woman – smashed the competition and won the 500-meter freestyle race at the NCAA women’s swimming championships. His name is William Thomas, though he now goes by “Lia” as part of the “transgender” act which has transformed him from a mediocre scrub of a male swimmer to a “national champion” of the distaff side.

Thomas is slated to appear in two more NCAA championship races. It wouldn’t be particularly wise to bet against him winning those.

The “Lia” Thomas experience is the kind of utter absurdity that SB 156, a bill by Sen. Beth Mizell in last year’s Louisiana legislative session, was aimed at stopping. Mizell’s bill would ban biological males like William Thomas from competing as women in women’s sports in interscholastic competition in Louisiana.

The bill had overwhelming support in both houses of the Legislature. But Gov. John Bel Edwards vetoed it, and then he leaned on the handful of Democrats and others who had supported the bill’s initial passage to reverse themselves during a veto override session.

They did, and the override failed. That vote was perhaps the single most embarrassing moment in Clay Schexnayder’s time as House Speaker, though Schexnayder was not the bad guy for failing to secure the 70 votes needed for an override.

It shouldn’t be that difficult to get Louisiana state legislators to vote to keep at bay a fiasco like “Lia” Thomas LARPing his way to a “national title” as a penis-packing female swimmer. But apparently when the governor calls and tells you that unless you agree that 2+2=5 you’ll get no asphalt poured in your district until after the next election, it’s enough no matter what arguments the House Speaker might make.

That bludgeoning was enough to flip the votes of Roy Daryl Adams, who calls himself an independent, Robby Carter, Chad Brown, and Jeremy Lacombe. Malinda White, another Democrat who calls herself an independent, skipped the veto override session. Kenny Cox and Wilford Carter, who had voted for the bill, ran for the hills and were absent for the override vote which functioned as a flip.

Republican Joe Stagni of Kenner, currently facing a recall, didn’t even need Edwards’ call. He opposed the bill at the beginning. Stagni, who as a Kenner City Councilman was a figure of petty scandal for being caught sending pictures of himself clad only in underwear via text message to a paramour, is the Legislature’s most libertine Republican when it comes to social issues; his constituents are entitled to ask whether as a matter of public policy it’s acceptable to have “Lia” Thomases in all the local swimming pools mingling with the girl swimmers as he would offer.

The counter to this, of course, is that LHSAA rules prohibit a “Lia” Thomas fiasco. But the LHSAA is made up of school administrators – a collective group of people who nationally, if not specifically here in Louisiana, have proven themselves utterly unreliable in fighting off even the dumbest of the Left’s woke cultural aggressions. So far Louisiana hasn’t been infected with widescale idiocy along the lines of COVID hysteria, critical race theory and transgenderism, and for that our people are to be congratulated, but there is zero reason for confidence that this can’t change.

Or that some leftist judge in Orleans or East Baton Rouge won’t take it upon himself, herself or zhirself to change it.

Those arguments were made before yesterday’s farce at the swimming championships. Now it’s a wide open debacle and we can see just how bizarre and ridiculous woke culture is in its full flower and Stagni’s humiliation – and that of Edwards and the Democrats he cowed – is complete.

Mizell’s bill is back in this legislative session. It’s now SB 44. There are 17 states which have already put a stop to “Lia” Thomas-style idiocy, so the bill is hardly an outlier in terms of public policy.

And bills like Mizell’s are necessary, because it’s absolutely clear the NCAA doesn’t have the sand to put a stop to men competing as women in their events. And if the NCAA won’t do it, experience tells us that ultimately the high school athletic associations won’t ultimately have the fortitude to stand against the woke barbarians at the gates.

One of those woke barbarians is John Bel Edwards. What happened at the NCAA women’s swimming championships is something he shares responsibility for. No one should let him forget it, especially as Mizell’s bill winds its way through the legislative process once again.

Interested in more news from Louisiana? We've got you covered! See More Louisiana News
Previous Article SADOW: Don’t Do This When Cancel Culture Comes Calling
Next Article You Can Steal $5 Million From Baton Rouge’s Bus System And Not Even Get Fired