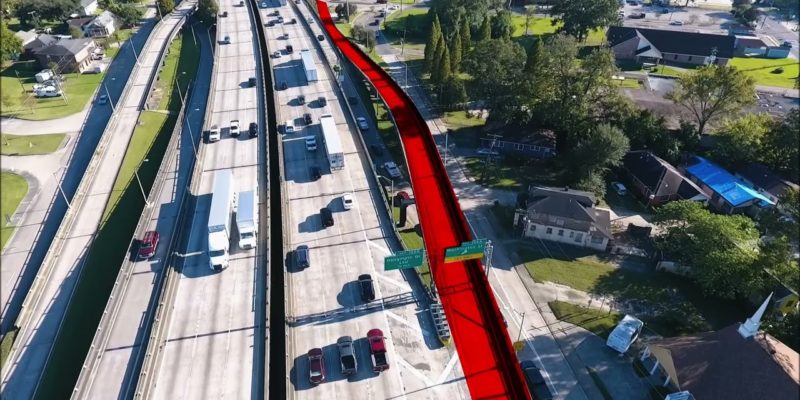 Coleman Brown is an architect in Baton Rouge. He’s usually pretty outspoken about infrastructure projects undertaken around the city. There is one in particular ongoing which has perked up Brown’s interest and he’s doing what he can to weigh in, in an effort to save taxpayers hundreds of millions of dollars and drivers in Baton Rouge a massive amount of inconvenience.

Namely, that the state Department of Transportation and Development is going to slim I-10 through a large part of Baton Rouge down to two lanes each way as part of an eventual widening project. That’s going to be in effect for what sounds like well more than a year, with the promise that by 2028 I-10 will be four lanes each way all the way through town.

Which is something that should have been a reality 20 years ago, when there would have been less disruption. A year of I-10 being essentially a four-lane road will kill downtown Baton Rouge and most of what’s nearby deader than Edwin Edwards.

Brown has a different idea.

Opponents of the state’s plans to widen Interstate 10 from La. 415 to Essen Lane aren’t giving up without a fight.

Architect Coleman Brown, who chairs the infrastructure committee of the Chamber of Commerce of East Baton Rouge (not to be confused with the Baton Rouge Area Chamber), says widening existing “choke points” for less than $100 million could save close to $1 billion and avoid headaches for drivers and business owners.

Brown, who has been on this mission for years, this week emailed a long list of media representatives and public officials and shared a video laying out his proposal.

“We’re going to lay all our cards out on the table and hope DOTD and the governor will see what kind of cost this is going to be,” Brown says.

However, Louisiana Department of Transportation and Development Secretary Shawn Wilson says in an email that the number of travel lanes will be reduced to two in each direction for a little more than a year, not four years as stated in the video. Among other issues, Brown’s plan does not address the condition of the aging infrastructure.

“The Baton Rouge interstate system is over capacity now because of many years of trying to either patch the problem or disregard it completely,” Wilson says.

The thing is, you probably do need to have at least four lanes on I-10 all the way through Baton Rouge. The Brown plan might not be enough.

But before DOTD would choke off I-10 with this massive project, wouldn’t you think the smart play would be to create a bypass to offload traffic to?

Bolstering the “old bridge” north of the I-1o bridge and upgrading the roadway on US 190 and Airline Highway so that through traffic could exit I-10 to the old bridge and then bypass downtown Baton Rouge before reconnecting with I-12 at the Airline/I-12 interchange, for example. This has been discussed for almost 30 years, it’s an obvious solution which ought to be done, and the businesses along Airline Highway who opposed it have mostly all relocated elsewhere now. If anything, upgrading that roadway to interstate quality would probably increase the volume the remaining businesses would do.

Or building an interstate-quality roadway on the West Bank of the Mississippi from I-10 along Highway 1 to the Sunshine Bridge, so travelers from Lafayette to New Orleans can bypass Baton Rouge altogether.

Actually, both of those projects need to be done. The West Bank highway would need to be done in any event in order to facilitate access to the new bridge they keep discussing that would service southern Baton Rouge; it would seem like getting that project started before tearing up the main artery through the capital city would only be prudent.

As it stands, Shawn Wilson seems determined to inflict the maximum amount of punishment at the maximum cost on the state’s taxpayers and Baton Rouge motorists.

And the response to this will be that there will be an increase in traffic leaving Baton Rouge and Louisiana for states like Florida, Texas and Tennessee – traffic which will bear the logos of U-Haul and United Van Lines.

But the leadership of this state doesn’t seem to care about that. If they did, one expects they’d be a lot more responsive.

Interested in more news from Louisiana? We've got you covered! See More Louisiana News
Previous Article VIDEO: Boy, That Was Some Tornado That Hit New Orleans Last Night
Next Article MARSH MAN MASSON: Which Of These 11 Shrimp Looks Best In The Water?