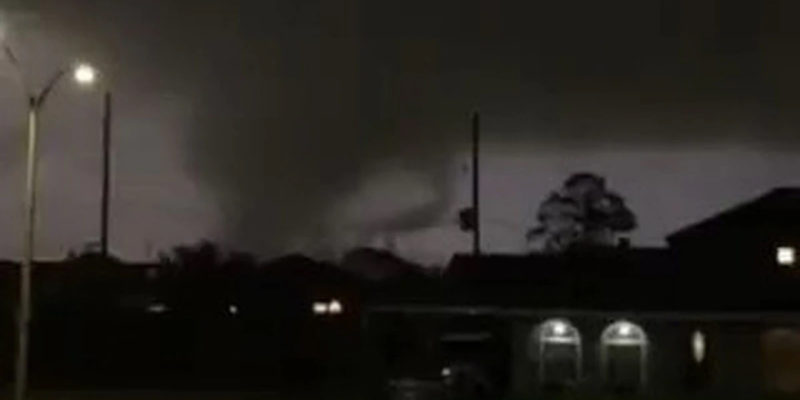 A community no stranger to dealing with the most severe side of nature was struck by what has been classified by the National Weather Service as a strong EF-3 with peak winds of 160 mph and a width in excess of three football fields.

It was the most powerful tornado in the history of the New Orleans area.

Film footage from the Domino Sugar Refinery showed the twister crossing over from the west bank of the Mississippi River intact before slamming into the historic Old Arabi neighborhood that borders the levee.

From there the tornado plowed up Friscoville Avenue inflicting significant damage upon architecturally significant structures and well-preserved residences that are almost a century old before tearing north towards the 40 Arpent Canal, decimating neighborhoods including a recently developed area with homes constructed after Katrina.

While the Hurricane Katrina floodwaters that rushed forth from the levee failures along the Industrial Canal in the Lower Ninth Ward damaged some older houses beyond repair, the tornado that ran through Benjamin, Rose, Karl, and Alexander streets completely obliterated many of the houses in its path and claimed a young man’s life that evening and contributed to the death of a young woman just over a week later.

Surveying the trail of destruction left in the tornado’s wake, the wreckage more resembles something caused by an aerial bombing raid and not the effects of a storm front that had raced across Louisiana.

Contributing to the surrealism of the scene is that only a block away from either side of the tornado’s path homes stand virtually untouched and show little to no sign of damage, as if the sidewalk serves as a border between two different realities, a contrast to what St Bernard residents experienced post-Katrina where there was complete ruin everywhere one looked.

To leave the world of Katrina one needed to drive ten miles to Metairie; in this case a two block walk either east or west of the center line of the tornado would suffice.

For someone who spent months post-Katrina navigating around obstacles such as displaced houses, some with their concrete slabs still attached, the contrast of splintered houses within eye sight of fully intact homes is a difficult visual to reconcile.

Yet after yet another hardship that befell St Bernard, there’s a determination to rebuild.

Less than 12 hours after the tornado spun its way across the back levee into the marsh en route to New Orleans East, which has had its own share of tornadic hardships over the years, residents of Arabi began to pick up the pieces and reassemble them.

The parking lot of the Chalmette Home Depot looked like that of a shopping mall on the morning after Thanksgiving as homeowners supplemented their existing stock of tools and purchased plywood to commence making their own repairs.

The thud of hammering and buzz of electric saws could be heard throughout the Arabi neighborhoods on Wednesday morning.

On the night the tornado hit, local restaurant owners returned to their kitchens, turned on their stoves, and began preparing meals into midnight for first responders assisting those whose biggest financial investments literally collapsed around them as they sought refuge in closets and interior bathrooms (yes, that strategy works and saved the lives of a few friends who ducked into them upon hearing the notorious train horn-like omen of the approaching tornado).

Work crews operated in the dark to clear debris from roadways to create access for utility linemen seeking to restore power.  The St. Bernard Parish Sheriff’s Office and Fire Department were on the scene mere minutes after the danger spun away into the distance.

And perhaps the most enduring trait of a true born and raised parish resident, people climbed out from the rubble of their own homes to search for neighbors who may have been trapped or injured inside what remained of theirs. The first victims of the tornado assumed the role of the first responders, as was the case when Katrina inundated St Bernard under ten feet of seawater as locals launched their flatboats alongside their rooflines to rescue stranded residents.

Closer to the river an elderly handicapped man limped down Friscoville Avenue, once a den of Louisiana gambling, struggling to carry a case of bottled water.  He didn’t live in the area but resided in Violet some eight miles away.  The disheveled old man said he wanted to do his part to provide relief to those laboring to haul debris from their homes.

The hardest of times brings out not despair but the very best of the parish.

While being peppered with questions from the national media during a tour of the destruction, St. Bernard Parish President Guy McInnis was asked by a certain Atlanta-based news network why anyone would rebuild in St. Bernard particularly in light of climate change.

Ignoring the narrative being pushed by the ideology-driven reporter, McInnis retorted, “If you lived here, then you’d know why you’d want to rebuild here,” a summation of the very resilient spirit of St. Bernard Parish.