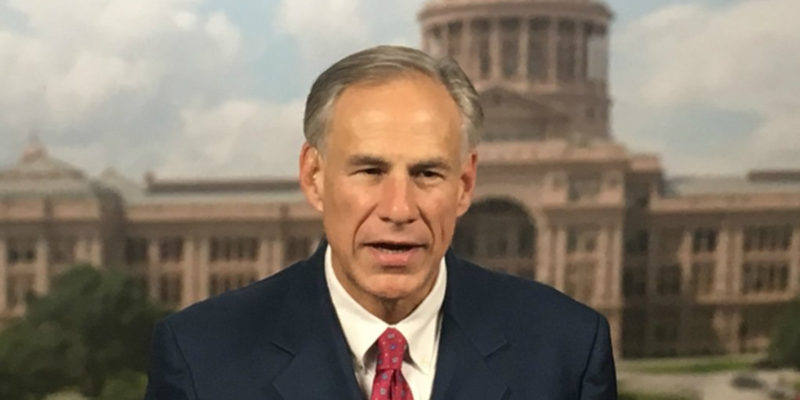 Greg Abbott, the governor of the Lone Star State, was not the first to think of the idea, but his decision to put illegal aliens caught in Texas on buses and drop them off in front of the Capitol in Washington, DC is absolutely the right one.

Florida governor Ron DeSantis was the trailblazer in this area. DeSantis said he was going to deposit illegals in Delaware, Joe Biden’s home state. This after months of fighting against the federal government for its practice of depositing COVID-positive illegals in Florida and then castigating DeSantis for the number of coronavirus case counts in his state…

Abbott’s solution is a little more demonstrative, as nobody notices much of anything that happens in Delaware.

During a press conference, Abbott announced several new actions his administration is taking to expand Operation Lone Star, a state government effort to curb illegal immigration into the state from Mexico.

“With the Biden administration ending Title 42 expulsions in May, Texas will be taking its own unprecedented actions this month to do what no state in America has ever done in the history of this country to better secure our state, as well as our nation,” Abbott said.

One of the additional actions being taken, Abbott said, will be charter buses hired by the state to transport illegal immigrants to Washington, D.C.

Lifting Title 42 isn’t just an impeachable offense – with this administration, there are multiple new counts of those daily. It’s literally an invitation to an invasion across our southern border. The two million illegals crossing in 2021 are near to nothing in comparison to what’s projected this year – they’re saying this might actually double the influx.

Title 42 was the last tool that border officials had to stem the flow of illegal migration from more than 150 countries across the southern border. Now they are anticipating a doubling or tripling of numbers, to as many as 18,000 a day.

We know what that means: more secret migrant flights fanning out from the southern border to a town near you.

Already, charter flights to White Plains airport in Westchester have started again, after a hiatus following The Post’s report last October revealing migrant planes landing in the middle of the night several times a week and unloading hundreds of migrants, claimed to be children, to be spirited away on buses to locations around New York and neighboring states.

With Lee Zeldin in a virtual tie with Kathy Hochul in the New York gubernatorial race, don’t be shocked at all to see those illegals put on the voter rolls in New York City and other far-Left jurisdictions. By law they’re not allowed to vote in federal elections but who’s going to enforce that?

Abbott’s plan to dump busloads of illegals at the Capitol, whether it’s executable or not, is better PR than it is policy. State Attorneys General, including Louisiana’s Jeff Landry, are trying something else as well…

Louisiana Attorney General Jeff Landry, joined by his colleagues from Arizona and Missouri, is suing the Biden Administration for rescinding the public health policy Title 42 during the worst border crisis in decades – a move that Landry knows will worsen the unprecedented crisis at our Nation’s Southern Border.

On Friday, the Centers for Disease and Control (CDC) announced it will terminate the Title 42 public health policy that allows border officials to turn away migrants because of the ongoing COVID-19 pandemic. The policy has been in effect since March 2020 and has been used by both the Trump Administration and the Biden Administration to turn away thousands of migrants to try and keep communicable diseases, like COVID-19, out of the country.

Revoking Title 42 will create a surge at the Southern Border, and it will overwhelm law enforcement agencies and non-governmental organizations as well. The U.S. Department of Homeland Security, (DHS), estimates that getting rid of Title 42 could result in as many as 18,000 migrants per day showing up at the southern border – which could mean 540,000 migrants in a single month.

Louisiana, Arizona, and Missouri are asking a federal judge in the Western District Court of Louisiana to force the Biden Administration to keep Title 42 in place until it conducts the required notice and comment period required under the Administrative Procedure Act and adopts a policy that is not arbitrary and capricious.

Yesterday, we noted that the things Biden is doing – lifting Title 42, openly touting transgenderism, pushing taxes on unrealized income which would be ruinous to the American economy – are absolute poison for the Democrats’ chances of staving off electoral Armageddon this fall. But Biden is doing them because he’s trying to hold on to his base in the face of plummeting morale.

This kind of go-for-broke policy radicalism only works when Republicans aren’t willing to push back against it, though. Abbott’s dumping illegals in DC and DeSantis’ anti-grooming bill in Florida are examples of pushback that makes policy as well as a point. We could use more of it from GOP leaders all across the country.