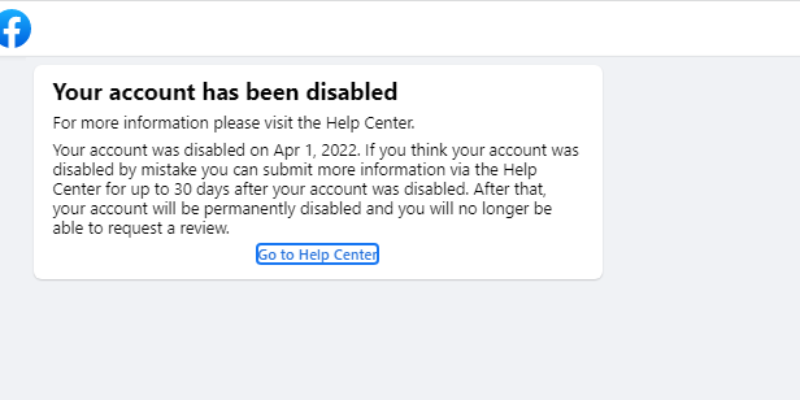 It’s been a week since tens of thousands of Facebook accounts were disabled for seemingly no reason whatsoever, underscoring growing demand for state-per-state legislative remedies to combat social media malpractice.

The New York Post reported that in the days leading up to and including April 1 (and it was apparently no joke), many Facebook users found themselves completely locked out their accounts.  The accounts, according to prompts informing the user of closing, were allegedly “permanently disabled” due to “violating multiple community standards.”  The amount of accounts affected was later estimated by Reddit users to be in the tens of thousands of users (disclosure: the author of this article was affected by this lockout as well).

Immediate attempts to restore the accounts in which users were asked to submit “government-issued identification” was met with response prompts such as “account permanently disabled,” “cannot be reviewed” and even “cannot be reversed.” To add insult to injury, Meta Platforms, Inc. does not have any real tech support for its flagship Facebook and Instagram platforms.  This led to public outcry on various other Internet platforms as to what happened.

Many of the users including yours truly tried an unsuccessful backdoor attempt at technical support from Meta through their subsidiary Oculus.  “Oculus,” a company which produces virtual and augmented reality goggles that Meta purchased in in 2014 along with “Portal” a standalone communicator that relies on Facebook Messenger to function, are the only products that Meta offers that have any form of customer services, albeit in a very limited way via chatbots.  Communicating with the Oculus chatbot proved to be a dead end, while a ticket of the incident was created, and account info taken, Meta refuses to help any further unless the user actually owns a Oculus product (which, according to NPR, costs over $300).  Even when I mentioned that I would be contacting a government regulatory agency such as the Office of the Texas Office of Attorney General, the response was nil.

Many of the users who complained in online forums claimed they had “vanilla pudding” accounts — meaning accounts that are so G-rated they are not offensive to anyone and, thus, had no strikes against them.  In fact, Facebook has published community standards guidelines under the term “Transparency Center” to the effect it takes at least five “hard strikes” against an account over a 90-day to 12-month period in order to be permanently suspended from the platform.  With warnings, suspensions ranging from one day to one month are often prescribed, depending on the kind of strike.  But for accounts to be suspended with no strikes or explanation goes against Facebook’s own transparency guidelines.

The damage to the user goes beyond not just being barred from logging into the Facebook environment.   Most people with an account use their Facebook as a type of cloud storage for their photos and videos. Having an account disabled prevents the user from retrieving their media, especially if they don’t have a backup copy, meaning years of their recorded life could be rendered into the digital ether.  Likewise since many third-party services use Facebook access as a form of logging in (in place of the traditional email plus password), then the user who has had their Facebook account disabled could find themselves permanently locked out of more than just social media.   Being de-platformed from the main “town square” of the internet in such a way may as well relegate that user to the status of a second-class citizen during the duration of the lockout (or sentence in “FB Jail,” as it were).

After the New York Post story broke, the accounts, including the one of this author, were soon restored without any reason as to why the accounts were disabled in the first place.  Some accounts were disabled for hours, others for days.  It’s a mystery as to why it happened in the first place.  There wasn’t even a claim that it was because of a cyber attack.

A platform so integrated into society with this many users affected and is touting their new “published transparency” needs to be held accountable for what transpired.  The Texas Legislature overwhelmingly passed HB 20 in 2021 to address this lack of accountability and give users a remedy to sue Big Social.  Unfortunately the law had an injunction placed on it by Obama-appointed U.S. District Judge Robert Pitman in December 2021, right before the law was scheduled to take effect.

HB 20 now waits for its time before the Fifth Circuit US Court of Appeals.  It never should have even gotten to this point.  The social media platforms are not transparent with who they “shadow ban” or outright remove from the platform.  The major social media companies on the Internet have become such an interwoven part of day-to-day life that they should be viewed as utilities. If cable TV providers are regulated then why not Facebook?

Being prevented from using such platforms can rightly be viewed not only a First Amendment violation, but also a civil rights violation.  The fact that there is practically no customer service or appeals process with these platforms also shows that they need a basic form of regulation — perhaps a “Digital Bill of Rights” to prevent temporary or permanent segregation of the “haves” and the “have-nots” of social media access.

The primary legislators behind Texas HB 20 were approached by The Hayride for comment. Bill author in the Texas House of Representatives, Rep. Briscoe Cain, responded that he was currently out of the country and unavailable for comment.  The sponsor in the Texas Senate, Sen. Bryan Hughes, did not respond at all (which is disappointing since Sen. Hughes spoke at length in 2021 as to why HB 20 needed to be passed into law).

This type of digital segregation was never acceptable, not in the past, not now, nor in the future.   Allowing Texas’s HB 20 to pass through the courts would be a step in the right direction to holding social media giants accountable and restoring public trust.

In the meantime, let’s remain optimistic that change can occur internally. Elon Musk, as one major example, vowed changes to Twitter with his recent purchase of 10% of the company’s stock and becoming Twitter’s largest shareholder and joining the board. State laws to augment the depressing reality of social media could only help accelerate such noble efforts.

Interested in more news from Texas? We've got you covered! See More Texas News
Previous Article What Did Obama’s White House Visit Mean For The Future?
Next Article Texas Busing Illegals To DC Is Absolutely The Right Move