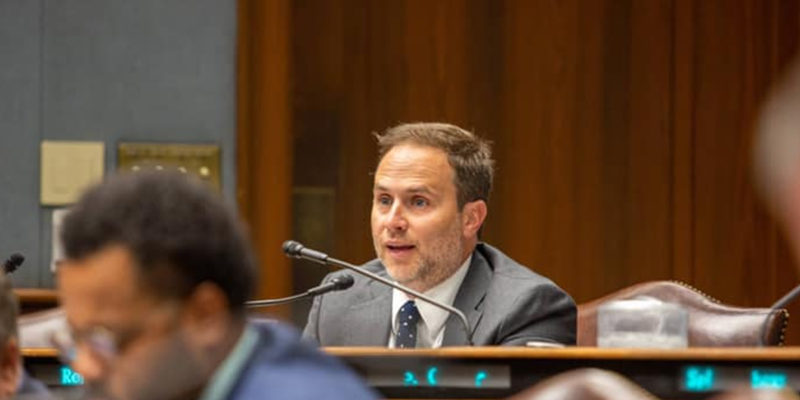 We’re talking about HB 206, which both Louis Gurvich and Jeff Sadow wrote about here at The Hayride after it strangely made it out of the House and Governmental Affairs Committee. The bill, which was authored by Kyle Green, a Democrat from the West Bank of New Orleans who’s related (nephew? cousin?) to Dollar Bill Jefferson, was passed out onto the floor on a 9-3-1 vote in that committee on Wednesday.

I don’t need to add too much to what Gurvich and Sadow wrote about the bill. They covered the main arguments pretty well. The big picture is that this is a garbage bill which seeks to deny the public access to information about people running for public office, and it shouldn’t be tolerated. Legislators I talked to yesterday at the Elephant Stomp said they couldn’t wait to kill this bill when it got to the House floor for debate and a vote on Tuesday, April 12.

Which hopefully is correct. But after what happened in the committee, it’s hard not to be nervous about the House floor.

There are 18 members of the House and Governmental Affairs Committee. Of them, 11 are Republicans, six are Democrats and then there’s Malinda White who’s a Democrat but wants people to call her an independent.

Sixteen of the 18 were on hand Wednesday. Daryl Deshotel and Mike Johnson, a pair of Republicans (this is a different Mike Johnson than the Mike Johnson who’s now in Congress, in case you just got confused), weren’t there. So there were nine Republicans, six Democrats and an independent.

And 13 of the 16 were in the room at the time of the vote on HB 206. Of the 13, eight were Republicans, four were Democrats and then there was White.

All four Democrats and White voted to deny the public the information of what political party candidates for judge belong to. They were joined by Speaker Pro Tem Tanner Magee, who’s actually on that committee and not just as an ex officio member (as the Speaker and Speaker Pro Tem are for all House Committees), Foy Gadberry, Les Farnum and Barry Ivey. John Stefanski, the committee chair, abstained from the vote.

Ivey has a very strong record of botching votes on bills it really ought not be too hard to decide on. Gadberry and Farnum, word has it, were pressured by Magee to vote yes. Both are freshmen. The three “no” votes on the committee were the three female Republicans – Valerie Hodges, Dodie Horton and Polly Thomas.

One wonders what on earth Stefanski was doing letting such a lousy bill run through his committee with Republican votes. He’s supposed to be smarter and more dependable than that, especially if he wants to run for Attorney General next year like it’s rumored will happen. Stefanski said just before the vote that the judges he talked to like the bill, which was taken as his support for it, but he didn’t actually vote.

That’s pretty lousy performance, honestly. Do you know why Stefanski’s judge pals like this bill? Because it’s an incumbent protection racket, that’s why. Let’s say you have a judge who’s been on the bench for 20 years and he’s a Democrat who never switched. What’s happened quite a few times in recent years is that a Republican will come along and beat that old Democrat judge because voters in Louisiana, at least in jurisdictions which aren’t majority black, are generally fed up with the Democrat Party and don’t want them in positions of political power anymore.

And while Stefanski isn’t guilty of voting for the bill, essentially what he’s done is to take up for incumbent judges at the expense of Louisiana’s voters.

Maybe it’s not the end of the world, but it would be nice if he’d rethink his position. Our elections are for serving the interests of our people. Not our elected officials. If he’s not on board with that concept, then maybe he needs a new line of work. Hopefully the reaction to this bill makes him understand that.

But Magee, who’s becoming a walking poop-bomb of a Louisiana legislator, spreading misery and stink everywhere he goes, is the real enemy here. Virtually everything he’s involved in comes out as a stain on the GOP brand – from the solicitous criminal justice reform package he helped to pass which allowed John Bel Edwards to empty the jails of career criminals who almost comically returned to crime (as we chronicled), to the never-ending attempts at removing Taylor Barras as Speaker in the last term, to his multiple attempts to raise taxes.

And now this. Throwing in with Democrats to keep them in political power when the voters want change is a classic Stupid Party move.

I was told last night that the bill would never get out of committee in the Senate so it’s really unlikely to become law no matter what happens on the House floor. Here’s hoping that’s accurate. But it’s hard not to become irritated at the utter contempt some of these state legislators playing games inside the rails have for the people of this state.

Enough already. They don’t have these kinds of problems with stupid Democrat bills advancing in Texas, Tennessee, Florida and the other Southern states which are kicking Louisiana’s rear end right now.