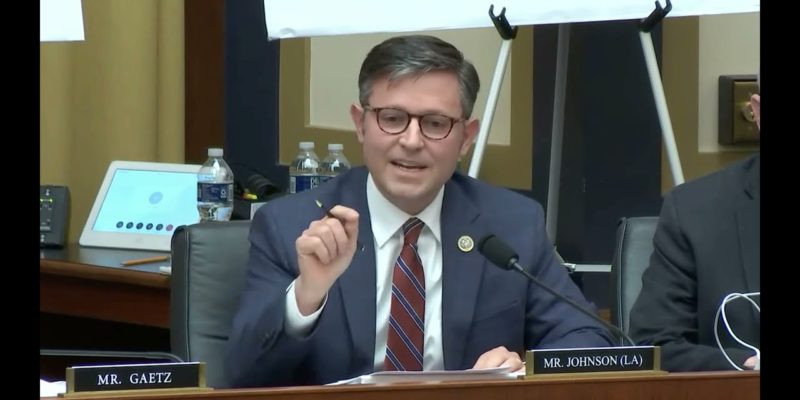 The book on U.S. Rep. Mike Johnson (R-Louisiana) is that while he’s a very principled conservative, he’s so polite and nice that it’s hard to think of him as a fighter the way people think of, say, Jim Jordan or Lauren Boebert.

What you’ll see below discredits that book.

There has been a great deal of buzz lately to the effect that Republicans in the House will, when they get the majority in that chamber after the November midterms, impeach Alejandro Mayorkas, the Secretary in charge of the Department of Homeland Security. There is certainly enough justification for doing so, as Mayorkas’ performance in that job has been nothing short of impeachable. The amount of illegal immigration through our southern border in the past year and change has all but obliterated that border, and Republican governors are now busing illegals to Washington, DC and gumming up truck traffic at ports of entry in an attempt to highlight the deluge and motivate Mayorkas to do something about it. Border patrol agents are openly challenging their supervisors over their effective stand-down orders as the invasion streams through, and chaos reigns.

It’s so bad that Chinese fentanyl is now coating our border areas. They’ve found fentanyl in everything from bags of skittles to vaping pens, because fentanyl from China is now being exported to Mexico and drug cartels, which effectively control that border and which it becomes more apparent all the time are influencing politicians of a certain party, are trucking it across on the backs of the people they’re sending here. We’re awash in the deadliest drug in human history and Americans are dying in droves from fentanyl poisoning.

All of this is Alejandro Mayorkas’ responsibility. Meanwhile he has DHS focusing on white supremacists, the majority of whom appear to be FBI agents attempting to entrap gormless hillbillies in fantasy terrorist plots, as the greatest threat to domestic security. And now DHS is busying itself with “online disinformation” as a new phantom menace to be slain.

You could make a very credible case that DHS should be dissolved and its functions which pre-existed the department’s creation during the panic following the 9/11 terrorist attacks sent back to the other federal agencies they formerly resided in. That would amount to a restructuring of the federal government, though, and that project can’t be initiated until there is a viable, sentient president – something we do not have at present.

But Mayorkas can be made to vacate his job. A GOP majority can do that by impeaching him in the House, putting him on trial in the Senate and, with enough Democrats willing to cut him loose as the political albatross such a project would make him, convicting him. Our guess is he’d resign long before that process was complete.

And Johnson makes an ironclad case for Mayorkas’ removal. It’s a thing of beauty and we’re ecstatic to bring it to you.