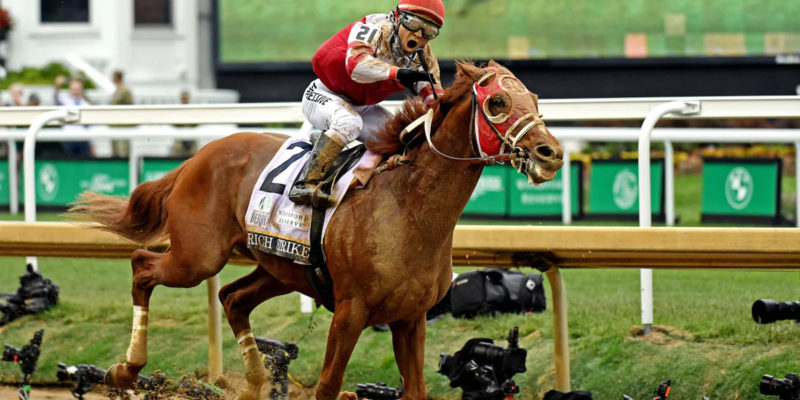 If America—or the world—needed a spark of hope in these difficult times, it was provided at this year’s Kentucky Derby by the winner, Rich Strike.

To call this victory improbable is to galactically understate.  To describe the win as “against all odds” is to redefine the meaning of odds.

Winning trainer, Eric Reed, almost left horseracing entirely after a tragedy 5 years ago when he lost nearly two dozen horses in a barn fire at his training center in Lexington, Kentucky.  For a short time, he considered the fire might be a sign for him to leave the sport.

Instead, “people I hadn’t seen, people I haven’t talked to in years, my best friends were there in the morning to pick me up,” Reed recalled. “It let me know there’s so much good out there, and then I just decided I wasn’t going to let it take me out.”

During the Kentucky Derby race itself, everything that could have been stacked against Rich Strike, was stacked against him.  He was an 80-1 longshot. The second longest odds of a horse to ever win the Derby.

He was a “claimed” horse—the only Kentucky Derby winner ever to have been purchased in a claiming race—for a paltry $30,000.  This means his owner did not purchase him outright at a private sale, public auction, or syndicate; likely because he showed so little consistency or promise.

In fact, Rich Strike barely made the race at all.  It required another horse to make a last-minute scratch before there was a spot for him.  Rick Dawson, owner of Rich Strike, found out his horse would be running in the Derby about 30 seconds before the Friday morning entry deadline.

Then, the horse started the race from the very worst spot of all—the 20th spot.  In the early moments of the race, he was in the back of the pack—3rd from last.  Rich Strike was behind 17 horses heading into the far turn and behind 14 horses as they entered the stretch.

However, as the race miraculously unfolded, he slowly gained ground by weaving in and out of spots since he was sandwiched between other horses—a stride or two later and he’d have been blocked in—but kept pushing forward.  Always forward, always onward.

Then, because ‘fortune favours the strong and the brave’, (Terence), Rich Strike shot through a gap and maneuvered his way to slide into a position on the rail that had momentarily opened between two other horses.

From the rail he quietly crept up unnoticed on the two lead horses whose riders were focused on their own duel and were stunned to see him surge past in the homestretch.

Rich Strike won because they forgot to tell him that he wasn’t supposed to win, or to even be in the race, or to be able to run that fast—but he didn’t know that.  He thought he could.  And he could.  And he did.

Like a magnet to steel, Rich Strike relentlessly punched through the spring air toward the finish line, and, channeling Secretariat, raced down the home stretch, “like a tremendous machine, ” and then, into the pages of history.

It is both beneficial and deeply satisfying to periodically witness such a dramatic and unexpected example of success against such great odds.

America is also in a race—a race to save her future and achieve her God-given destiny.  Fortunately, unlike Rich Strike, our Nation does not start this race at the back of the pack at 80 to 1 odds.

However, with inflation at a 40 year high, surging food and gasoline prices, a lethal crime wave, a new surge of the China Virus on the horizon for the fall, a potentially nuclear war in Eastern Europe, the hardship caused by our intentionally destroyed energy independence, and with intimidation, hate and threats of violence aimed by the Woke mob at Supreme Court Justices who may be on the verge, after 50 long, cruel years, of righting the barbaric wrong of Roe v. Wade by restoring the right to life and the protection of our laws to the weakest and most innocent among us, we Americans have much to be concerned about.

But I believe that, like this unknown and unheralded horse, when we rededicate ourselves to stay the course, ‘to fight the good fight, to keep the faith, and to finish the race’ (Timothy) there is really nothing that can stop us as Americans.