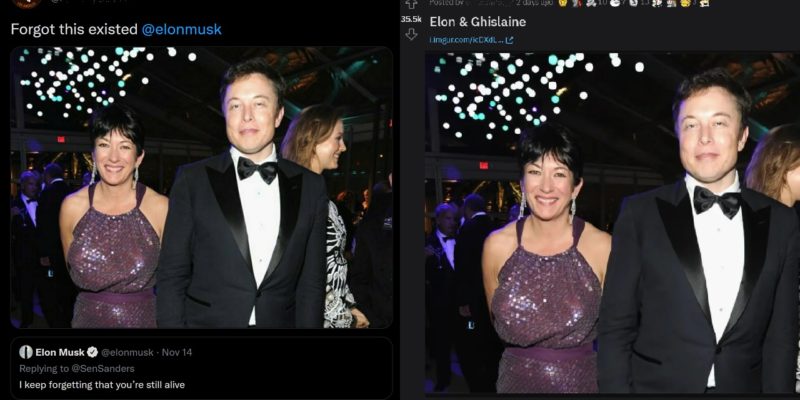 In tweeting about generalities most folks already know about the far-left deep state, the multi-billionaire is showing himself to be one of the people. Things get really interesting when he starts spotlighting specific stories that historically have been kept hidden by nefarious players–after those same nefarious players want to project their own twisted ideologies and strategies onto the intents of others.

Specifically this week, Musk hit the deep state with a most telling and damning shot, one that involved none other than Jeffrey Epstein and Ghislaine Maxwell.

Notorious child-traffickers some wonder if Musk himself affiliated with.

First, however, a little context.

On Monday, Mehdi Hasan of NBC, in a tweet, called Musk a “petulant & not-so-bright billionaire” who “casually bought one of the most influential messaging machines & just handed it to the far-right.”

NBC’s @mehdirhasan on @elonmusk: "If [the “neo-Nazi faction" of the GOP expands in Nov.], we may look back on this .. as a pivotal moment, when a petulant & not-so-bright billionaire casually bought one of the most influential messaging machines & just handed it to the far-right” pic.twitter.com/bIpiIlFlwR

Mehdi Hasan, NBC, and mainstream media in general comprise one formidable beast that is the main megaphone of the deep state in America. All of us in the “neo-Nazi faction,” as the lovely Hasan so kindly tweets about self-reliant, freedom-loving Americans, know it and have known it for a long time. They call us Nazis but it is the textbook example of projection–they label us what they are and do themselves.

What we have at the head of Twitter now in Musk, however, is a player who appears to want to call out every single snake in the grass. To shed light on every shadow. Hasan and NBC included.

This “petulant and not-so-brilliant billionaire” responded with the words “NBC basically saying Republicans are Nazis…,” and then in a separate tweet, added that the comments were bred from the “same org that covered up Hunter Biden laptop story, had Harvey Weinstein story early & killed it & built Matt Lauer his rape office. Lovely people.” A subsequent response from a third Twitter user, who pointed out how quickly the mainstream media went silent on the Ghislaine Maxwell trial, prompted Musk to drop the light on a story still crying out to be known–a wailing of tears still not as loud and as painful as the millions of children screaming for justice even now:

Musk said, “Where is their ‘client’ list? Shouldn’t at least one of them go down?”

It says it all that we heard more about Will Smith slapping Chris Rock than we heard about Ghislaine Maxwell's trial.

It is also "interesting" that the account tracking the Ghislaine Maxwell's trial got banned when it gained traction.

Where is their “client” list? Shouldn’t at least one of them go down!?

This “client list,” as so many know, includes some of the most popular, household names in America and across the world. Justice still lies in wait. In laying down the gauntlet like this, so obviously shedding light on one of the most evil crimes being perpetuated on humanity in child trafficking, Musk is drawing his line in the sand as he has for weeks now.

To help us Americans remember that there is a war still to win.

Yes, the mainstream media continues to present to the American public what it wants and how it wants it in order to push a certain narrative. They do it to distract, to manipulate, to mind control. This is nothing new. For years they have squashed the most important of stories that would put their own bad actors in an even worse light. The Hunter Bidens and Harvey Weinsteins and Ghislaine Maxwells know this well. Evil has escaped for decades in this country.

And now that there is a voice hinting at buried truths, trying to wake the everyday American up to some of these malicious players and practices, it is the Mehdi Hasans and NBCs of the world that want to virtue signal and discredit a “petulant” and “not-so-smart billionaire” shedding light in what dark alleys they hide.

The simple fact of the matter is that it won’t work anymore. Cable news numbers have been tanking for a long time and Americans are waking up by the millions. Too many people know at least enough of the truth now and will not be fooled again. An old saying goes, “Show me a man’s enemy and I’ll show you the man.” This applies to Donald Trump and it apparently applies to Elon Musk, because the more and more the deep state actors come out against him, the more we should be willing to pay attention to what he is saying, even if it does make us research even more deeply to see why Musk himself is pictured with Maxwell in 2014.