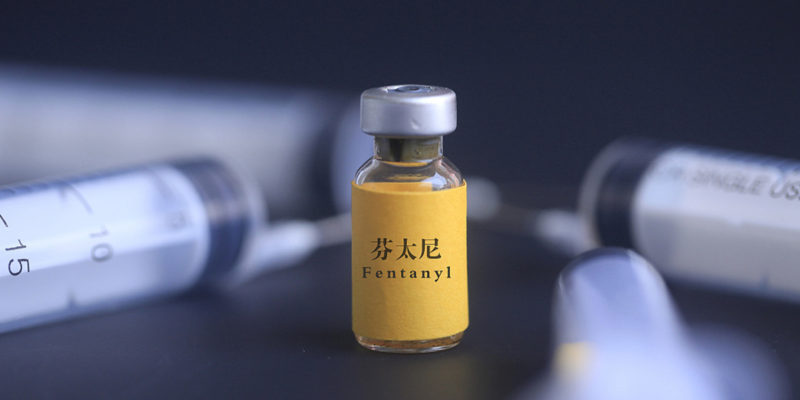 While the debate over the southern border is largely discussed in terms of immigration and migrant flows, more than just people flow across the border. In just the last two weeks alarming reports from government sources warn of a potential weapon of mass destruction crossing the border, in amounts sufficient “to kill every single American.”

That weapon is the drug Fentanyl.

Congressman Higgins, who has an extensive background in law enforcement and sits on the important House Homeland Security Committee, correctly pointed out recently that the key to stopping the infestation of fentanyl is to secure our wide open, porous southern border.

Senator Womack has authored legislation in the Louisiana state senate that provides for enhanced criminal penalties for distribution of fentanyl. That bill, SB315, seems poised for final passage in the Louisiana House as of this writing.

Since the Biden administration revoked Trump-era border security policies, the U.S. southern border has faced an uncontrolled flood of illegal aliens, terrorists, and drugs, most notably Fentanyl. The amount of Fentanyl making its way into American cities and towns has quadrupled since Biden took office. Deaths attributed to fentanyl have increased a shocking 800% in some communities.

The DEA warns state and local law enforcement that under Biden’s watch that enough fentanyl has made its way into America to “kill every single American.”

While the flow of common illegal drugs, such as cocaine, heroin, and crystal meth is worrisome enough, fentanyl is uniquely dangerous, particularly if weaponized. All of this should be enough to infuriate all of us, but the situation is actually much worse than that because fentanyl is not like any other drug. Unlike cocaine, heroin, or crystal meth, fentanyl actually poses a real weapon of mass destruction threat in the hands of terrorists. That’s why fentanyl can’t be treated like those other drugs. And there is no argument for legalization, since fentanyl has been used legitimately and legally for decades already.

Security experts have long regarded fentanyl as a chemical weapons threat. The drug’s high toxicity and increasing availability are “attractive” to potential adversaries “seeking nonconventional materials for a chemical attack,” James McDonnell, a former assistant secretary at DHS wrote in a memorandum two years ago.

The incredible potency and lethality of Fentanyl led the Rand Corporation to describe the synthetic opioid as “The Most Dangerous Illegal Drug in America.” A Canadian study described a type of Fentanyl, Carfentanyl, as 2000x more deadly than a nuclear bomb.  That study posed the question, “Which would you choose as a weapon of mass destruction: a thermonuclear bomb or carfentanyl?”

The answer:  Carfentanyl—and it’s not even particularly close. The study notes:

“One kilogram of carfentanyl represents 20 million fatal 50 μg doses, enough to kill half the population of Canada. On a per kilogram basis, carfentanil is arguably 2000-fold deadlier than a thermonuclear bomb.”

Fentanyl is cheaper than heroin and 30 times more powerful. The carfentanyl strain of fentanyl is astonishingly dangerous. One of the reasons that fentanyl is so dangerous is because a dosage error of the equivalent to a few grains of salt can prove lethal.

And dosing errors are not uncommon, mainly because of the source of much of the supply of fentanyl: Communist China. Most illegal fentanyl (not all fentanyl is illegal, it has also been used for decades as a legitimate anesthetic and pain medication) comes from the same country responsible for the COVID-19 pandemic. A substantial amount of fentanyl is produced in small labs spread throughout China without any regulation or quality control whatsoever.

The fentanyl threat is exacerbated by the willful actions of the Chinese Communist Party, which continues to resist all requests by the U.S. government that it crack down on illicit fentanyl production and the involvement of Chinese companies with the Mexican narcotics trade. As Center for Security Policy Senior Fellow and Asia expert Grant Newsham writes:

The fact the Chinese regime doesn’t ban fentanyl in its entirety—much less go after producers the way it goes after Uighurs, Christians and Falun Gong, or Hong Kongers—suggests the CCP is glad America is awash in fentanyl.

And when Trump told Xi to knock off the fentanyl flow back in 2018, Xi reportedly replied: “We don’t have a drug problem in China.” That means Xi can control the drugs and he’s channeling the chemical warfare agents—in true “unrestricted warfare fashion”—towards his #1 rival and greatest enemy.

As Rand points out:

“…researchers found several Chinese firms willing to ship a kilogram of nearly pure fentanyl to the United States for as little as $2,000.”

Close ties between the Chinese and Mexican criminal drug cartels ensure the steady flow of fentanyl for use in cutting Mexican heroin. In 2018 the U.S. government indicted members of the “Los Zheng” cartel -a Shanghai and Wuhan-based criminal enterprise- for “conspiracy to manufacture and distribute controlled substances, conspiracy to import controlled substances into the United States, operating a continued criminal enterprise, money laundering, and other crimes.”

While there is some medical debate about the extent of the risk from incidental contact with fentanyl used as a heroin additive, anecdotally stories of dangerous fentanyl contact are common. In March 2017, a police officer in East Liverpool, Ohio had to be rushed to the hospital after he brushed an “unknown powder” off of his uniform. That powder ended up being fentanyl. In August 2018, at the Ross Correctional Institution in Chillicothe, Ohio, 29 officers, first responders and nurses were sped to the emergency room after an inmate spread just three grams of heroin-fentanyl mix around his prison cell. U.S. Drug Enforcement Administration issued guidance encourages strict safeguards for emergency responders who may encounter fentanyl.

If accidental contact with fentanyl can readily cause serious illness and even death, we can be sure that Al Qaeda, the Islamic State and other terrorists have taken notice. In any case there is little doubt that in the hands of nefarious actors, such as terrorists, fentanyl can be used as a weapon of mass destruction.

The US Department of Defense researched the possibility of using fentanyl as a crowd control agent but determined it was far too dangerous to use as a non-lethal agent. That didn’t stop the Russians however, who not only weaponized fentanyl, but used it in a hostage situation in a Moscow theater resulting in the death of more than 100 hostages. Medical guidance makes clear that, if properly weaponized, fentanyl does not have to be ingested or injected to kill.

For street drugs, fentanyl absolutely outpaces anything else in terms of lethality and danger. But most importantly, unlike drugs such as cocaine and crystal meth, fentanyl can be weaponized to create mass casualty events as a weapon of mass destruction- in similar fashion to long-known chemical agents such as Sarin, VX and mustard gas. But fentanyl is far easier to acquire. And as such it must be viewed differently.

The threat from fentanyl must be considered a national security threat, necessitating robust and aggressive action to seal our southern border. And no issue better illustrates the malfeasance and dereliction of duty of Biden, Mayorkas and the entire administration than the fentanyl threat that they have irresponsibly allowed to metastasize.

As a result of the Biden administration’s negligence and CCP perfidy, America faces a combined public health crisis and national security threat of terrible proportions—the opioid epidemic which has impacted so many people and its fentanyl aspect. Unfortunately, because the Biden administration has been asleep at the wheel when it comes to border security, the key vulnerability in fentanyl trafficking, states have no choice but to ramp up their enforcement and protective measures. As COVID-19 lockdowns have come to an end, now is the time for policymakers to begin focusing on this vital issue. Not just because of the terrible toll in human life and misery opioids have caused, but because fentanyl, is a potential WMD in the hands of rogue nations and terrorists.

Interested in more national news? We've got you covered! See More National News
Previous Article ALEXANDER: 2000 Mules Documentary Substantiates 2020 Election Fraud
Next Article MONKEYS & MULES: The #Monkeypoxalypse May Be Coming to a Town Near You