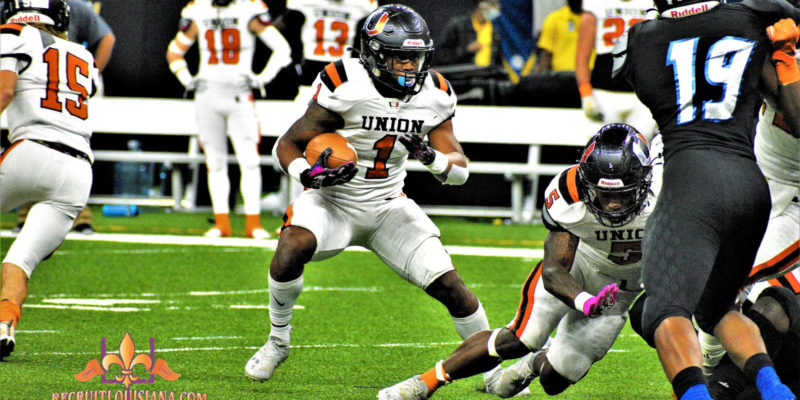 It is something LSU Tiger fans hope they start to hear more of again as the state produces blue-chip after blue-chip every recruiting cycle.

2023 four-star running back Trey Holly, an absolute monster in a “small” package, is indeed staying home. His commitment to the LSU football program is a microcosm of a bigger, much more important picture as new head coach Brian Kelly takes small step after small step in re-situating this Tiger program to where it was just a few short years ago.

Holly says he is 1000% committed to Kelly and LSU. At the risk of sounding cynical in today’s day of recruiting flip-flops and non-committed commitments, that would seem like an awfully difficult choice to back out of.

Back in February, Kelly made it clear what his purpose in recruiting the transfer portal was. Committed to returning to a focus on putting a fence around the state of Louisiana, Kelly and the Tigers were ranked No. 3 in the 2022 Transfer Football Team Rankings. The staff’s commitment was to again put up that proverbial fence around Louisiana, the much talked about recruiting stranglehold on the state that Nick Saban once preached as LSU’s coach and now invades as its most hated foe at ‘Bama.

“We were looking for guys who had a connection to the state of Louisiana,” said Kelly. “It wasn’t an accident that a lot of these guys were from the state, wanted to come back to Louisiana, wanted to play for LSU. For whatever reason, they didn’t end up playing football here in their freshman, sophomore years, but want to be here.”

That desire to be at LSU–and stay at LSU–is a quality Kelly will be looking for in the high school ranks as well.

He most certainly found it in Trey Holly.

After LSU whiffed on three four-star in-state running backs under the previous coaching staff, Coach Kelly and his team have landed an absolutely vital superstar in Holly. The 5-foot-8, 180-pound all-purpose back from Union Parish is ranked No. 2 at his position by Rivals and chose Louisiana’s flagship university over several offers, including from Tennessee, Arkansas, Ole Miss, Auburn, Texas A&M, USC, Oregon, and Florida State.

“I can’t let you leave,” Kelly told Holly during an unofficial visit to campus in the spring.

Associate head- and running backs coach Frank Wilson, who was an award-winning recruiting coordinator with the LSU program from 2010-2015 before taking head jobs at UTSA and McNeese, was another name given by Holly as to the reason why he decided to stay home to play in Louisiana.

“Coach Frank and the LSU staff has just been here throughout this whole process,” Holly said. “Whether it was a text or call, seeing how much they care off the field is what meant a lot to me.”

Holly started playing varsity football in the eighth grade. By the time he had finished his junior year in high school, the small-but-powerful back–whom everyone will be comparing to recent Tiger standout Clyde Helaire-Edwards–had amassed a mind-blowing 7,829 yards and 108 touchdowns, had led his team to its second consecutive 3A state title game, and had won his second consecutive Louisiana 3A Offensive Player of the Year award.

Holly piled up 289 yards with six touchdowns in a 45-26 upset of No. 3 St Martinville in the state semifinals last year. The victory sent the Farmers to the title game in New Orleans. Here are the game’s highlights:

His current rushing yardage has him sixth in Louisiana high school history and easily within striking distance of the record of 8,704 held by former Tiger and recently hired football staffer Nick Brossette, who played five seasons at U-High.

He knows he has unfinished business at Union Parish before he puts on the purple and gold. And if he hits his goal of a 3,000-yard senior season, his high school record may never be broken.

“Me personally, I feel there’s a lot I’ve got to work on, add to my game and my bag, to improve my craft,” he said. “I’m close, but I’m not there yet. I have to earn it. That’s what keeps me going.”

Coach Kelly is indeed working on that fence around Louisiana. He is likely going to be the type of coach that can bring respect back to the football program and the state. Hopefully one of his next catches will be another star running back from right here in Baton Rouge, who some say is even better than Holly.