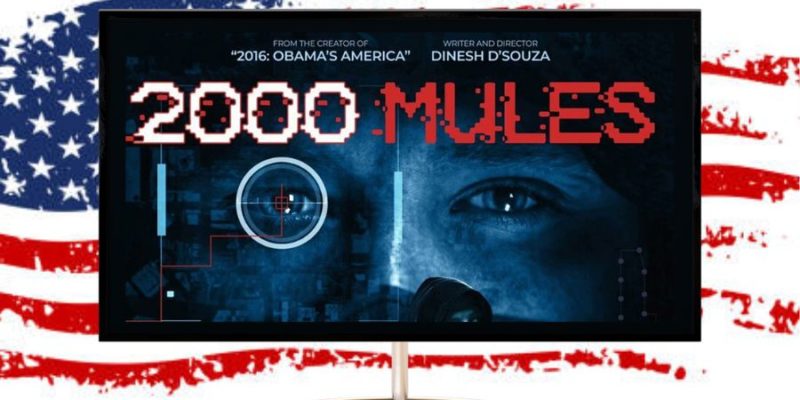 “They thought we’d never find out. They were wrong.”

It is the online promotional slogan of one of the most important films in our lifetime.

A January 6, 2021 Hayride article put the very serious issue of election fraud in a Jeff Foxworthy-style humorous light. Sixteen months later, after several states have made occasional news concerning this all-important story, after Mike Lindell’s cyber symposium in South Dakota this past August, Americans have another opportunity to witness the level of election fraud that likely flipped a landslide victory for Donald Trump to Joe Biden.

That next opportunity is the film 2000 Mules.

Of course deep-state megaphone Google is all over its customary (and tired) act of fact-checking and false premising. This in itself should give Americans reason to watch.

Among other places online, the film can be watched in its entirety FOR FREE here. It was screened by President Trump at a rally in Pennsylvania Friday night.

The “mules” are the human criminals who carried out the illegal activities surrounding the 2020 presidential election. It keys in on just Pennsylvania, Georgia, Wisconsin and Arizona–the pivotal swing states that decided the election after most Americans had gone to bed election night.

The 88-minute film is the creation of Dinesh D’Souza, a conservative filmmaker and author pardoned by President Trump in 2018. 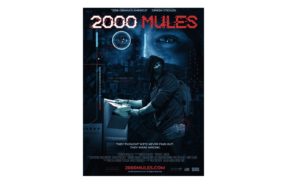 There has been more than enough evidence and scuttlebutt of election fraud in 2020. There have been many instances over the years where the mainstream media has covered a story with much less evidence. Just consider Donald Trump’s four years as president as a multi-pronged example. The only way this story will be covered and, if need be, authentically addressed, is if the court of public opinion pushes voters to turn out in droves for the midterm elections so that the floors of the 2023 U.S. House and Senate can do their constitutionally valid legislative work.

The work current Democrats and RINOs simply won’t do.

Jacqueline Timmer, founder and director of the American Voter’s Alliance, issued this statement reacting to the premiere of D’Souza’s film:

2000 Mules validates everything the American Voter’s Alliance and The Amistad Project have been doing for the past two and a half years. This film does an excellent job of shining light on one of the many worrisome practices that took place during the 2020 election–a practice funded by billionaires in pursuit of partisan gain.

It didn’t take 2000 Mules to convince millions of Americans of what they were witnessing with their very own eyes on the night of and the months following the election. But this film is the latest opportunity to affect the nature of public opinion, to get more and more people talking about this story in the months and weeks leading up to the midterm elections.

Yes, even though millions of American citizens knew enough about the third of November 2020 and its “anomalies,” to put it mildly, even as Joe Biden was being sworn in as President of the United States, it has largely become back to business as usual.

Yes, Americans have felt the pain of inflation from the gas pump to the grocery store and everywhere in between it seems. Even admission to a high school sporting event seems astronomical, but what is an athletic department to do when officials are demanding more money and the cost of transportation is so high? I know this reality well from working the gate on game nights for the school at which I teach. The pain when a person takes out a wallet or purse is real, and it hurts even me to take their $8 from them.

We live in a society where the nation’s citizens have become so jaded to government corruption that even the overflowing evidence of election fraud in a presidential election isn’t motivation enough to continue worrying about it because so many people feel helpless to do anything about it.

Some people are even tired of even a mild attempt to tell the truth to those who were never paying attention in the first place. See and hear the relative hopelessness in this comment from Zebulon Walton on Telegram:

I’ve resigned from showing others the truth. I’ve entered the mode of preservation.

Having moved on from debate, and proving falsities and illogical mindset, my focus is now 100% solely dedicated to my Lord and Savior Jesus Christ, food, family, financial and property security.

Allow others to believe what they want. If they ask, I’ll share but I’ll quickly walk away and voice my rejection of anyone wishing to criticize my beliefs or faith.

This can be the mindset, and understandably so, of people who have kept their noses in research for months and years following stories like this, who feel they must constantly have to provide a mule-load of evidence to people who have never cared to pay attention but who would mock them even in the face of their hard work and persistence.

Some sleepers don’t want to be woken up.

I have been this way at times–tired, jaded, cynical. In fact, I left the research almost entirely for all of 2021 before returning to the grind this past January. I needed the break.

But in recent months, I have been reading again, researching again, seeing the patterns again. I am experiencing the freshness of clarity. In all my optimism for a better America and world, I want to believe that this film, while it may not convince your everyday far-lefty, may in fact be watched by enough people to see a tipping point of sorts reached.

After all, it may take only a small number of the population for something truly monumental to happen–to tip the balance. Scientists at Rensselaer Polytechnic Institute have found that “when just 10 percent of the population holds a belief, their belief will always be adopted by the majority of the society.” This study is in line with Malcolm Gladwell’s Tipping Point, a book that has inspired my teaching career and the belief that if one can motivate a certain number of students, that positive energy will automatically spread to the whole:

The tipping point is that magic moment when an idea, trend, or social behavior crosses a threshold, tips, and spreads like wildfire. Just as a single sick person can start an epidemic of the flu, so too can a small but precisely targeted push cause a fashion trend, the popularity of a new product, or a drop in the crime rate. This widely acclaimed bestseller, in which Malcolm Gladwell explores and brilliantly illuminates the tipping point phenomenon, is already changing the way people throughout the world think about selling products and disseminating ideas.

Such is the nature of this latest opportunity with 2000 Mules.

Americans, especially the ones fed up with the good guys always ending up on the short end of things, may feel as stubborn as, well, mules. But I, and many others for that matter, do believe that this information will go mainstream at some point, and in my mind, it is important that the reality of this election fraud is at least in the consciousness of as many people as possible so that the cognitive fallout won’t be as severe. Simply put, it may be impossible for some to digest all at once if some of us don’t take on the job of breadcrumbing this person and that person along the way. Patience, baby steps, will win the day.

Is it totally our responsibility? No. Will we convince everyone to at least try to pay attention? Of course not. But that isn’t the point. The beautiful thing about telling the truth is that the teller of it doesn’t have to worry about whether or not they are responsible for its hearing.

Call me a hope-loving optimist, but I do believe. I believe in the power of patience and perseverance and the all-important notion of timing. If just one of us, or maybe two or three, watches the film, then that could create two or ten or a hundred more from there. We never know when just one person may tip the scales in the right direction as the most important midterms in America’s history draw near.