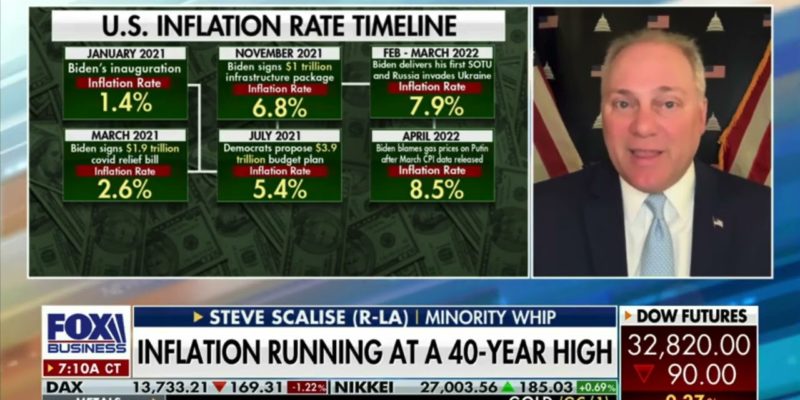 This goes 9 minutes, and it’s a pretty good run-through of the news of the day – the border, the economy, the Dobbs decision (I have an American Spectator column I managed to squeeze out yesterday about how losers on the Right are actually worried that the Dobbs victory will cost the movement in the midterm elections), and Joe Biden calling MAGA people the nation’s biggest terror threat.

Before turning you over to Steve and Maria, let me throw out something on that last topic, because I got asked about it a couple of times since Biden said what he said.

The thing to understand about that is Joe Biden is essentially Ron Burgundy. Joe Biden says what he’s told to say. Biden is, essentially, a potato. He doesn’t have cogent thoughts or anything which registers as intelligence. In fact, it’s debatable how much of that capability he ever had. Biden at his best was one of the dumbest, shallowest members of the U.S. Senate who took positions solely based on who was paying him and what his political advisers told him would further his career. Couple that miserable record with a clear and present mental decline and nothing Biden says can be taken seriously as a measure of things he actually believes.

The concern worth having when Biden says MAGA – or in the vernacular I’m using, particularly with my new book coming out at the end of this month, Revivalist – conservatism is the biggest threat to America is that it was his handlers who put those words in his mouth. Because it’s Ron Klain, Jill Biden, Susan Rice and the other behind-the-scenes monsters who are really in charge of this administration, and this is what they believe.

And why are they so afraid of revivalist conservatives? Not because they believe we’re a threat to America. They couldn’t care less about that. They’re afraid because they know revivalism is a threat to their power.

These people have fed off the incompetence and sloth of Stupid Party Bush Republicanism for 30 years. It has made them fat and sluggish. They can’t win arguments or persuade anyone anymore, which is why all they do is demonize and cancel people with ideas different than theirs when they’re not continuously pushing the frontier between reality and fantasy in the culture (if that doesn’t register with you, consider that they’re insisting on putting tampon dispensers in men’s bathrooms and using “birthing people” as a substitute for “woman”). They can keep Stupid Party Bush Republicans like Bill Cassidy and Mitt Romney off-balance with idiocy like that; they’re a lot less successful when it’s Ron DeSantis they’re up against.

So while you can get outraged over Biden calling you a terrorist, you should be encouraged. He’s telling you his regime is deathly afraid of losing power to you.