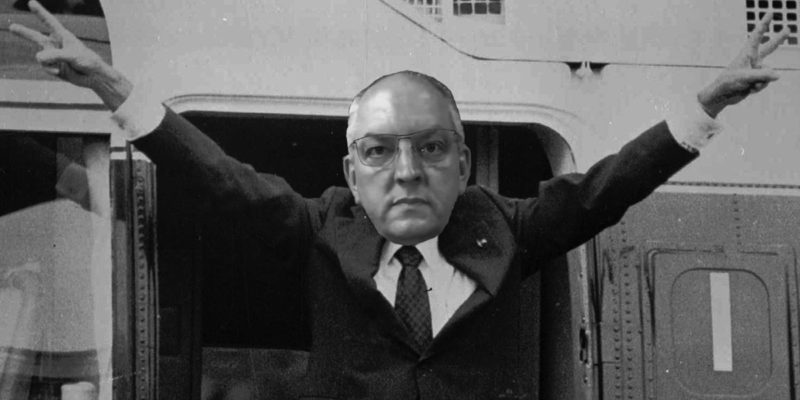 The old folks among our readers will get the reference in the headline, but for the benefit of those of you who weren’t politically aware during the Watergate era, this is what a “modified limited hangout” is…

In a March 22, 1973 meeting between Richard Nixon, John Dean, John Ehrlichman, John Mitchell, and H.R. Haldeman, Ehrlichman incorporated the term into a new and related one, “modified limited hangout.”[3][4] The phrase was coined in the following exchange:[5]

Before this exchange, the discussion captures Nixon outlining to Dean the content of a report that Dean would create, laying out a misleading view of the role of the White House staff in events surrounding the Watergate coup. In Ehrlichman’s words: “And the report says, ‘Nobody was involved,'”. The document would then be shared with the Senate Watergate Committee investigating the affair. The report would serve the administration’s goals by protecting the President, providing documentary support for his false statements should information come to light that contradicted his stated position. Further, the group discusses having information on the report leaked by those on the Committee sympathetic to the President, to put exculpatory information into the public sphere.

This is where we are in the John Bel Edwards-Ronald Greene case, now that Louisiana’s legislature has a committee slowly plowing through the information surrounding the cover-up of Greene’s killing along a Union Parish roadside by state police troopers in May 2019.

The goal of the governor and his minions has been to attempt, Watergate-style, to firewall the scandal surrounding Greene’s killing below Edwards on the totem pole. This seems difficult to do, because we already know that Edwards had been notified the morning after the state troopers killed Greene about what happened.

The idea that Edwards or his people wouldn’t have probed into the facts of the Greene case immediately following the killing is rather insulting to the intelligence. A governor of a state, equipped with a large staff of functionaries, is going to find out the truth about an incident like the one in which Greene was killed so as to know how to react.

John Bel Edwards is incompetent when it comes to lots of things. Economic development and tax policy, for example. What he’s not incompetent about is finding dirt on political opponents and others who can affect his career. He and his staff knew in no time flat that the state police troopers had beaten Greene to death on that desolate roadside, and furthermore they knew that if the word had gotten out that the white Democrat governor who had been elected in 2015 mostly due to a unanimous share of a gigantic black turnout – a share and size he could not be re-elected without in the fall of 2019 – had on his watch an extralegal killing of a non-criminal black man for nothing other than a refusal to pull over when commanded, he was cooked.

The assumption and the motivation should be all the evidence anyone needs to convict John Bel Edwards in the court of public opinion. There is no innocent-until-proven-guilty here. Edwards doesn’t get the benefit of the doubt. Not that there is much.

And not when we already know that he lied. Last week any shred of defense he may have had on that score was wiped away.

With racial tensions still simmering over the killing of George Floyd, Louisiana Gov. John Bel Edwards and his top lawyers gathered in a state police conference room in October 2020 to prepare for the fallout from a troubling case closer to home: troopers’ deadly arrest of Ronald Greene.

There, they privately watched a crucial body-camera video of the Black motorist’s violent arrest that showed a bruised and bloody Greene going limp and drawing his final breaths — footage that prosecutors, detectives and medical examiners wouldn’t even know existed for another six months.

While the Democratic governor has distanced himself from allegations of a cover-up in the explosive case by contending evidence was promptly turned over to authorities, an Associated Press investigation based on interviews and records found that wasn’t the case with the 30-minute video he watched. Neither Edwards, his staff nor the state police he oversees acted urgently to get the crucial footage into the hands of those with the power to charge the white troopers seen stunning, punching and dragging Greene.

That video, which showed critical moments and audio absent from other footage that was turned over, wouldn’t reach prosecutors until nearly two years after Greene’s May 10, 2019, death on a rural roadside near Monroe. Now three years have passed, and after lengthy, ongoing federal and state probes, still no one has been criminally charged.

“The optics are horrible for the governor. It makes him culpable in this, in delaying justice,” said Rafael Goyeneche, a former prosecutor who is president of the Metropolitan Crime Commission, a New Orleans-based watchdog group.

This is the modified limited hangout. The AP reporters digging into this case have found enough foul-smelling stuff in it that it’s now a scandal which has to be managed, so all of a sudden we now have confirmation that yes, in October of 2020 Edwards saw the footage of Greene’s killing.

As Goyeneche said, he’s culpable in delaying justice for Greene’s family. But what would be the purpose of delaying anything after October 2020?

He’d already been re-elected by then. You’d think it would be better just to let everything come out and get it over with.

Unless there was information which couldn’t come out.

And we know what that had to be. It had to be that John Bel Edwards and his minions knew well before the 2019 election that state troopers, essentially Edwards’ praetorian guard, had beaten a black man to death on a roadside for no reason other than he was driving while intoxicated (and scared out of his mind for what turned out to be good reason) and led police on a late-night chase down country roads. And that knowledge came with the understanding that if the black community in Louisiana knew the truth, they’d also know there was very little value to their interests in having a white Democrat governor as opposed to a Republican.

And what would follow from that would be that black turnout in the 2019 election would be soft, and maybe not even unanimous for Edwards.

But assumptions and obvious suppositions aside, we don’t have the whole truth about this yet. We do have enough of it for Edwards to be impeached for lying about the case. It would be nice if the Legislature would begin that process and put this liar and wannabe tyrant on the griddle so that Greene’s family might get some sense of accountability for what happened to him.