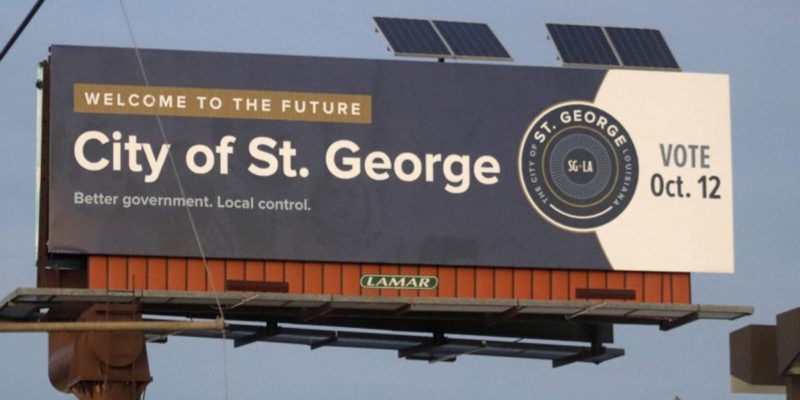 We haven’t been following it all that closely, we’ll admit. Mostly because we don’t understand why the lawsuit brought by Baton Rouge mayor-president Sharon Weston Broome and some of her cronies against the people attempting to incorporate the city of St. George in the southern unincorporated reaches of East Baton Rouge Parish hasn’t been dismissed.

It ought to be dismissed. So far as we can tell there hasn’t been anything presented which amounts to a justiciable controversy.

Louisiana law grants the right of people to incorporate cities when they organize a petition for the purpose and it meets the requirements as laid down in statute, and then the incorporation passes in a referendum.

And the St. George folks did that. Arguably, they did it twice, as their first near-miss shot at an incorporation petition was ruled insufficient. Chicanery was alleged, at least somewhat credibly, but rather than push the issue the St. George organizers waited until they could legally try again, scaled down the geographical footprint of the city and recirculated the petition according to the law, got the required number of signers, then convincingly won the election to incorporate the city.

All objections to St. George should have been litigated in that election. An unbiased observer would judge they had been. The objections weren’t persuasive to the people inside what will be the St. George city limits, and according to Louisiana law those are the people who matter.

Opponents of St. George, in particular Democrat legislators from North Baton Rouge, brought legislation aimed at changing the law to force a parish-wide vote on municipal incorporations. That’s an admission of what we all know – that the St. George organizers were following the law when they went through the process to incorporate the city.

When you’re trying to change the law to stop somebody from following it to do something you don’t want them to, it’s a pretty good indication the law is on their side and not yours.

To say that’s a bad argument is to be too polite. It’s embarrassing they’re even making it. But of course, as with all stupid arguments made these days, they’ve brought race into it.

Because if rich white people don’t consent to have their money forcibly extracted to pay for government actions purportedly benefiting poor black people, that’s racist. Forget about the contention, reasonable and factual though it might be, that those government actions are legendarily in effective in actually benefiting the folks they’re supposed to. You can’t make that contention or else you’re branded as a bigot – because to have that argument would be highly inconvenient to the government actors.

The way most of the intended victims of this idiocy handle it is simply to pick up and leave for a place where the people perpetrating it can’t get elected. In the case of Baton Rouge, that mostly means Ascension and Livingston Parishes. The St. George folks are a bit more stubborn – they’re demanding to govern themselves without having to trade real estate.

Which is an unpardonable sin. Their lack of docility must be punished.

The plaintiffs in this suit made a big deal about the fact that the second iteration of the St. George petition didn’t include Gardere, the impoverished and gang-controlled collapsing neighborhood in southwestern East Baton Rouge Parish which isn’t incorporated into the city and was a big drag on the first petition effort. Almost nobody in Gardere signed the petition the first time, and that was probably the difference in making it fail. So the organizers dumped Gardere from the second effort and were successful.

Because Gardere is almost completely black, this is somehow a racist decision to have been made. In other words, the St. George organizers are racist to have accepted the obvious indication that the black Gardere residents didn’t want to be part of the new city. To be not racist, they should have incorporated those folks into the new city against their will.

It’s perhaps the dumbest collection of arguments we’ve ever seen.

What also has come out of the trial is that, in testimony last week, Baton Rouge police chief and Broome’s embarrassing puppet Murphy Paul admitted that the BRPD’s budget would have to be cut by 20 percent were St. George to go live as a city. And this would be obviously very detrimental to its ability to function.

There’s a word for that, and that word appears in the state criminal code.

BRPD isn’t the only city-parish agency which is raking money in from St. George taxpayers without providing them services. That racket is widespread. And because St. George is more caucasian than Baton Rouge is, this “white man’s burden” business is ingrained in our civic culture, or so you’re supposed to believe.

The worst of this is that race shouldn’t have anything to do with it. If St. George was mostly black like Baton Rouge proper is, and yet still attempting to incorporate, these arguments would be fully exposed for the dishonesty behind them. But because there are mostly white people in St. George it’s evil for them to try to keep their own money.

Again, they’re not keeping it from poor black people. Poor black people in Baton Rouge don’t benefit from all this swag the ruling class in town are collecting on their behalf. If you don’t believe that, go drive around in North Baton Rouge and see whether you can find any evidence the city-parish’s billion-dollar budget is doing the residents any good.

Or listen to a police scanner to find out what happens at night.

The truth is, BRPD is down something like 115 officers from what it should have. Murphy Paul says losing 20 percent of his budget would be devastating; the answer is that it shouldn’t have any effect at all.

The International Union of Police Association president said last week that Paul ought to resign because he’s such a disaster. That was reported in local media, but it didn’t shake the city’s ruling class in the slightest. And Paul is still on the job, such as that is.

The St. George organizers ought to be commended for fighting rather than just dumping their houses and getting out. Instead they’re being demonized not just by Democrat politicians who’ve stolen and pocketed their money rather than using it to prop up the failing parts of the parish like they advertised, but by rich white businessmen like Richard Lipsey and John Engquist who have reaped the benefit of political connections and access to the same elite as they’ve trashed the place.

They don’t want their rice bowls broken. Better that it happen to St. George’s residents than them.

The trial is going to result in the new city being born. There is a transition team already meeting, though it’s hamstrung because Broome refuses to do her duty and appoint her representatives to it. It’s possible it won’t be born courtesy of the trial court, but certainly by the time the state Supreme Court gets finished with the case St. George will go live.

In the meantime we’ll endure stupid arguments from stupid politicians and connected elites. And Baton Rouge will continue sinking into the muck of murder and property theft.