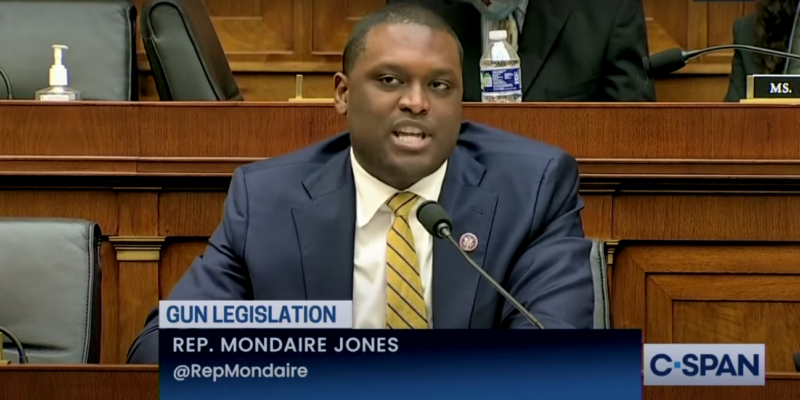 It is cringe worthy. It is perhaps even comical and a lighthearted video funny enough to pass around before the weekend. But it is also the exact type of tyranny-laced rhetoric people who instituted the Second Amendment wrote about.

It is right in line with what Joe Biden said this week: “The Second Amendment, like all other rights, is not absolute.”

On Thursday at an emergency Judiciary Committee hearing, the leveraging of American deaths continued when Rep. Mondaire Jones (D-NY) said nothing will stand in the way of passing gun reforms, and apparently sweeping ones at that.

“Enough of your thoughts and prayers,” Jones said, promoting one act called the Protect Our Kids Act. “You will not stop us from advancing the ‘Protecting Our Kids’ Act today.”

I wonder if Jones has stopped praying for all the shooting victims in, say, New York for instance. Or in Chicago. Or in L.A.

It is both a farce and a tragedy that people like Jones don’t realize so many of us see right through this sweet little title “Protect Our Kids Act” when his party won’t even protect the most vulnerable of kids in our society. It is the face of a party facing almost certain defeat in the fall midterm elections.

Unless they cheat, of course. But that is what the next plandemic is for.

Jones railed like an obedient little tyrant taking his marching orders from his far-left masters.

The definition of treason 1 : the offense of attempting by overt acts to overthrow the government of the state to which the offender owes allegiance or to kill or personally injure the sovereign or the sovereign’s family 2 : the betrayal of a trust : treachery

Of course political “leaders” across all branches of government have so surpassed the abundantly clear line of treachery that this little rant will likely come off as more comical than something to worry about.

A logical person may also wonder what it is exactly the legislator from the New York metropolitan area is doing about that little “weapons of war” problem in his own community. He is certainly on top of the mass vaccination push that is killing people by the truckloads worldwide.

Logical folks know that people like Mondaire Jones lust for power. The problem is Jones, like most politicians, want to argue on the side of Pathos instead of Logos, which is one of the primary problems in whatever is left of the political discourse in America today.

When you hear a politician gush in saying something like “To the parents who mourn and the children who fear,” and you feel bad because you don’t feel like you can argue against parents who are mourning, that is what tactic the speaker is employing. Don’t fall for it. It’s exactly that–a tactic to silence you.

Another problem Jones and others have is that they don’t appear to really know what they’re talking about. (Surprise surprise!) Here is an exchange he had with Fox’s Hillary Vaughn yesterday:

HILLARY VAUGHN: You mentioned you want weapons of war out of circulation. What is a weapon of war to you?

HILLARY VAUGHN: So, is that like semiautomatic handguns and rifles?

JONES: Semiautomatic weapons would qualify as assault weapons and these are things that should be banned.

HILLARY VAUGHN: Almost take almost every gun out of people’s hands. I mean…

JONES: That’s not true. I mean, handguns, for example, would not qualify under what I just described. I got, I’m sorry. I got to go.

So, Jonesy, is it all semiautomatic weapons including handguns or is it not? Do you as an American lawmaker have any idea what you are talking about or, again, did you just get mixed up in the maze of words handed down to you from the puppet masters in Washington, D.C.?

As Tucker Carlson so aptly put it, “Mondaire Jones runs away and probably not back to his district to lower the murder rate. He just didn’t want to get into details.”

The details found in the persuasion of Logos, not the emotion and feels of Pathos.

Indeed, Mondaire Jones had his marching orders and carried them out like the obedient little swampster he is. He may have spoken to the heart of many Americans, yes, but people like Jones forget what this country is built on, what it is still made of. If he and lawmakers, not to mention the fake president, want to go after We the People’s Second Amendment rights, they are going to find trouble. They had better be ready to fight with the very guns that protect their three-piece suit asses every day.

As one patriot put it in a comment section, “We’ll be waiting, Behind every Tree, Rock and Stump.”

Interested in more national news? We've got you covered! See More National News
Previous Article SADOW: Ronald Greene Panel Must Fish Or Cut Bait On Edwards’ Role
Next Article CROUERE: The Death Of The Cell Phone Bill Would Be A Rare Win Over RINO’s