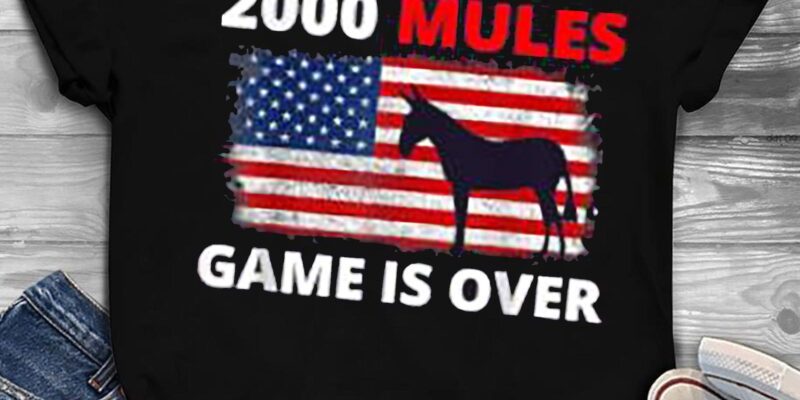 Watch Dinesh D’Souza‘s 88-minute-long documentary 2000 Mules before you trust any of the absolute vile propaganda out there right now concerning a perfectly valid film challenging the results of the 2020 election. According to D’Souza, 2000 Mules is the most successful political documentary in a decade, having netted over $10 million already.

A bonus you’ll receive is to view the overwhelmingly clear evidence of the argument and then be able to juxtapose it with the comedy of errors and evil being produced by the mainstream media.

Despite the fact that arrests have already been made because of the clear evidence in the film, the Associated Press (AP)’s headline for today, the one that was spread all over the country far and wide to news outlets everywhere, reads “Arizona lawmakers hear from election conspiracy theorists.”

If you’re new to this game, know that when they start calling you a conspiracy theorist, you are very likely right over the target. They fear you in some way and have to attack the individual with a shaming label instead of the individual’s argument–which is so often on point.

No, I didn’t, Google. 2000 Mules is just a tiny bit important in this whole American drama going on right now, wouldn’t you say? I’m pretty sure you knew what I meant.

Like a petulant teenager. I can practically hear the sneer in its voice when it italicizes Miles for emphasis.

Another little nugget to know is that back on May 5, San Francisco and left-leaning company Door Dash sent out the following tweet: “I just watched 2000 mules… There is no way your phone can track you like that what a conspiracy theori–oh wait…”

That tweet has since been deleted. Deep state company must’ve gotten a scolding from its deep state masters. 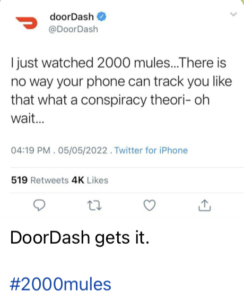 In another example, The Guardian’s headline on May 29 was “Trump’s ‘big lie’ hits cinemas: the film claiming to investigate voter fraud.”

Finally, I show you this clip where Newsmax wouldn’t say a word about the film, so Arizona gubernatorial candidate Kari Lake made sure to remind them of the matter by redirecting the host’s question on abortion.

The Left will do anything to distract America from @DineshDSouza’s 2000 Miles movie.

Do not stop talking about it. If networks don’t want to cover it, force them to. Send it to everyone you know. This is black & white proof that cannot be refuted.

Next, we need 2000 Arrests. pic.twitter.com/aiyMw4ammH

“If we can have geotracking when it comes to January 6th, and come to people’s homes who were holding a sign outside of the Capitol and interview them–have the FBI interview them…then I certainly think we can use that same technology to look at people who may have been harvesting ballots illegally and possibly, potentially even paid to do so by non-profit organizations.”

“The Left will do anything to distract America from Dinesh D’Souza’s 2000 Mules movie. Do not stop talking about it. If networks don’t want to cover it, force them to. Send it to everyone you know. This is black and white proof that cannot be refuted. Next, we need 2000 Arrests.”

Lake’s is a very similar call to We the People as this article when we also knew the resistance the film would get.

And it’s not just your typical lefty sites hiding this absolute bombshell of a story. It’s channels like Fox News and Newsmax too.

WHAT ARE THEY ALL HIDING IT FOR? WHY?

All of it is the latest round of media gaslighting after Donald Trump’s explosive rally in Wyoming Saturday night. Among other things, he reminded Americans that “If you don’t have fair and free elections and you don’t have strong borders, you don’t have a country.”

Trump continues to posture in a way that might give hope to the cynical. He continues to say that there is a big move coming, and that it’s related to the 2020 election.

On Tuesday in Arizona, True the Vote’s Catherine Engelbrecht and Gregg Phillips presented evidence of 2020 election ballot trafficking in Yuma and Maricopa Counties to the state legislature. They explained how geospatial technology works and how it is used by law enforcement today. This is one of the fascinating puzzles put together by the 2000 Mules film.

The presentation went well. Arizona Representative Walter Blackman said that they need to move forward with HB2289, a bill that would make elections in Arizona a single day and a single vote, with paper ballots and drop box restrictions to make the overall process–not to mention the result–much more secure.

To that, the crowd there went nuts like it was a college football game in Tuscon or Tempe.

For more information and context on the presentation, visit this site from Wendy Rogers, AZ State Senate.

When asked about people writing articles attempting to discredit 2000 Mules and the cell phone data, Phillips said, “These articles are being written by journalistic terrorists.”

Indeed, the mainstream media doesn’t run with stories rife with truth as they do the fake ones. Arizona is the state where 2000 Mules produced some of its first arrests, but progress in terms of justice remains slow. From The Gateway Pundit:

Guillermina Fuentes and Alma Juarez were both caught by David Lara and Arizona State Senate candidate Gary Snyder, who set up a hidden camera after years of investigating the operation. Their undercover work was featured in True The Vote’s “2000 Mules” documentary.

The Gateway Pundit reported that video evidence was delivered to the turncoat Attorney General Mark Brnovich before the 2020 Presidential Election, but he waited until December 2020 to file these charges.

RINO Mark Brnovich has done almost nothing despite the massive evidence of Arizona voter fraud presented in the film.

Despite her indictment for election fraud, Fuentes still serves on the Gadsden Elementary School Board. Fuentes’ daughter, Lizeth Esparza, was recently hired by the Board as Superintendent of the district shortly after her indictment.

The Gateway Pundit reported that investigators from the Arizona Attorney General’s office recently served another member of this school board, Gloria Torres, warrants at the Comité De Bien Estar nonprofit organization. Torres’ home was also raided.  This is directly connected to the ballot trafficking scheme exposed in True The Vote’s “2000 Mules.”

Gloria Torres is listed as the Membership Coordinator of Comité de Bien Estar.

They all appear to be connected to this organized ballot trafficking ring.

Yet, despite these clear arrests, the slowness of the justice system notwithstanding, the media still attempts to gaslight the American public. Sandra Smith, one of the many puppets at Fox News, interrupted Republican senatorial candidate Mo Brooks when he brought up 2000 Mules during his appearance on Fox News Sunday.

Said Smith, “Okay and that has been looked at and fact-checked by multiple outlets including Reuters who have debunked that as any sort of proof that there was widespread voter fraud.”

“I’m sorry,” Brooks retorted, “but numerous people have fact-checked this and found you are absolutely wrong.”

Smith was the perfect replacement for Chris Wallace. And bravo to Mr. Brooks for calling her out. Even Phillips, after he heard about the interview, “Truthed” to Fox News on Truth Social: “It’s one thing that you chose to stay silent while Mules went viral and educated Americans that the election was indeed stolen. It is an entirely different matter that you have chosen to lie to the world. I challenge Sandra Smith to go face to face with any one of us. Game on boys and girls.”

We are hoping this little get-together happens, but we aren’t holding our breath.

Phillips also shocked the entire room on Tuesday when he said, “We do indeed have a matter brewing that is ten times bigger than 2000 Mules. It’ll be about six weeks before we can clear our way through it, but I assure you it is the most explosive issue that you have ever come in contact with, related to elections within the United States.”

We will leave that there for later without much further commentary, except to say that we hope this “matter ten times bigger” will uncover the corruption with Dominion voting machines. We hope it will expose the deep state globalist structure that drove this voting fraud and has driven it in elections all over the world for decades. We hope the enemy nations are named, but most importantly, the enemy players. These enemies of the people must be brought to justice.

Remember this article below. And don’t think that there is no connection between the WHO and the 2020 presidential election. It all connects.

It’s the same players playing the same multifaceted game, and it’s been going on for a very long time.

Remember, the truth is on your side: Donald Trump got 74 million votes (at least). That is the highest number of any incumbent in U.S. history, even topping Obama by several million votes.

Take a wild guess on who is right in this information war. Sandra Smith and the AP, or True the Vote’s Catherine Engelbrecht and Gregg Phillips?

General Michael Flynn said over a week ago on the Lou Dobbs Show, “This dark, deep pool that exists in the swirl of Washington, D.C. is so swampy, and it’s filled with these people, and they are gonna now start to feel the pain.”

We most assuredly are hoping that is true.

Be strong in the Lord. Know that a reckoning is on the way for a whole lot of bad people. Maybe Arizona can be a point of encouragement for those of us getting tired of things like the Sussmann verdict and the bad guys seemingly always getting away with their own crimes. 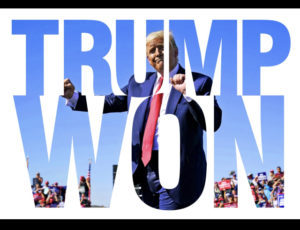 Interested in more national news? We've got you covered! See More National News
Previous Article All The Black White House Staffers Want Out, And Isn’t That Strange
Next Article You Cannot Make This Up: AP Writer Runs Two Opposite Headlines on 2000 Mules