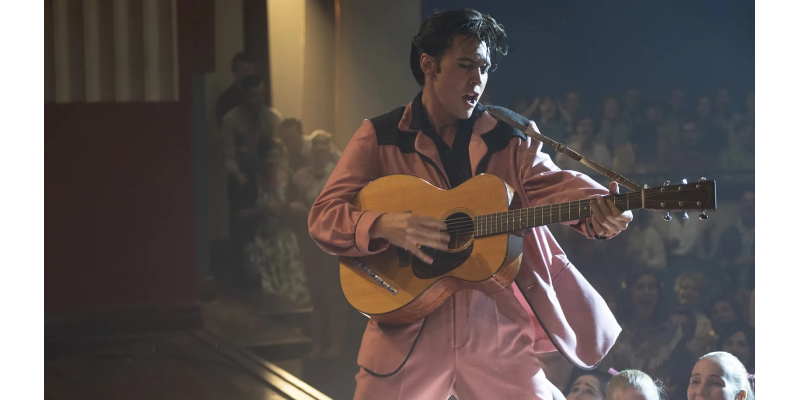 The Presley estate has a two-fold marketing problem that a recently released Rock biopic may just help fix.

Think of it as a struggling 45 single. On the A side: the original wave of fans of Elvis Presley are getting old. The Suspicious Minds at Graceland are surely wondering what the next decade or two might look like in terms of revenue and how to keep Presley’s legacy alive. Recent album releases have featured remixes of Presley’s lesser-known tunes and posthumously dubbed duets with Lisa Marie Presley and celebrity guests.

Flip over to the B side: a continual stream of white guilt from academia to entertainment media has younger generations looking for dominant cultural figures to topple. Presley, who is widely known to have combined Black Gospel, Southern (e.g. predominately white) Gospel, Rockabilly, and other influences together in his recordings and performances, is increasingly being dismissed as a racist fraud who appropriated Black genres of song and dance for his own profit. Be it social justice crusades, critical race theory and revisionism regarding just about every facet of American history going back to 1619, the King has become an easy target. Especially for his support of President Richard Nixon and drug law enforcement. It’s nothing various rappers from Chuck D to Eminem haven’t opined.

“Elvis,” directed by “Great Gatsby” mastermind Baz Luhrmann, artfully addresses these twin PR problems for the future of Elvis Inc. The ambitious film has been in some phase of production or pre-production over the last decade, and it shows in the level of detail exhibited in the script and overall craftsmanship. Though at times it comes off as an overly indulgent brain-mapping exercise in terms of its content, it has quickly become a critically acclaimed hit resounding with audiences and taking “Top Gun: Maverick” out of the top box office spot.

Luhrmann as writer-producer-director casts a modern, oftentimes dizzying, and sometimes indulgent portrayal of Elvis’s tragically shortened life. From Presley (played/performed by Austin Butler) peering under enthusiasm-filled revival tents as a dirt-poor rapscallion, to an overweight forty-something struggling to croon along to a Righteous Brothers tune shortly before his death, it covers an impressive amount of ground in roughly two-and-a-half hours (and we hear there may be a four-hour director’s cut out there). Playing fast and loose with the camera angles and a backdrop of remixed Elvis tunes from varying urban genres made for a flick that anyone with any level of recollection or latent cultural understanding of EP can enjoy. Solid reviews and honest, non-manipulated scores on film review aggregation sites are testament to the film’s powerhouse performance.

The portrayal of Presley’s infamous producer, “Colonel” Tom Parker (Tom Hanks in a fat suith with a nose job) is the focal point of the movie, which could just as easily have been named for him. The film’s tragic hero turned villain gets the “Joker” treatment by examining his history as a carnival barker turned “snow job” artist. “I made Elvis Presley,” Hanks’s Parker said numerous times throughout the movie in his vague European-meets-Southern accent. The established history (Parker getting Elvis into Hollywood show biz and establishing his status as an international celebrity) and the speculation (Parker being an enabler of Presley’s prescription drug abuse and womanizing) are balanced, though ultimately agreeing Parker abused his most famous client.

Now for the abuse we all knew was coming. This movie is largely set in the American South. And that wasn’t done without a heapin’ helpin’ of apology. Though the peace offerings are glaring in places, it’s sparse enough to not distract.

For starters: no mention whatsoever of Presley’s more Caucasian musical influences as a young boy. This is by design. As far as we know from the movie, he only absorbed Black Gospel from the aforementioned revival tent experience and Rhythm and Blues from peering into an adults-only club concealed in a corrugated metal shanty. No other influences, including an Assembly of God church (likely, and sadly, segregated) his family sometimes attended. He ran with mostly black friends in the movie — no mention of his first girlfriend named … Dixie. Maybe she’ll make the director’s cut.

The movie compensates for his would-be appropriation by making Elvis more of a sympathizer of the Civil Rights Movement and a liberal counterculture participant than he may actually have been. Hint: this makes his use of multi-cultural musical influences acceptable, but read on.

Given, Presley was a friend to all (race, income, or religion didn’t matter all that much to him and his choice of associates — that story has been told a million times), the movie makes a point to pause anytime a tragic event in the Civil Rights Movement occurred. He was moved by television news coverage of the assassinations of Dr. Martin Luther King Jr. and Bobby Kennedy. And that much is likely true as recollections from Priscilla Presley and Sun Records founder Sam Phillips have revealed. Scuttlebutt over Presley being a racist date back to a JET magazine article in 1957 which spread a rumor that many held onto. The film navigates this well, but overcompensates. Again, probably by design.

Then came the political switch. We already know Elvis did not endear himself to the religious establishment for his hip-shaking and full-mouth kisses of adoring female fans, but the movie pulls a little sleight of hand to make him look like a Leftist radical with a disdain for social conservatism — juxtaposing two events taking place in Tennessee around the same time. From The Wrap:

… Butler’s Elvis performs at Russwood Park in Memphis, Tennessee, on July 4, 1956. The concert was formative in his career … once he was warned not to even lift a finger [to defy orders from law enforcement and National Guardsmen present], only for him to famously disobey it. The concert made such a stir that it also broke the color barrier that was established to attempt to segregate the crowd, and he was escorted out in a frenzy.

“In that moment, Elvis the man was sacrificed, and Elvis the god was born. He had no idea what he had done,” Tom Hanks says as Colonel Tom Parker in the clip.

Meanwhile, at the Legion of Doom, a pro-segregation rally is taking place. Not one but three Confederate battle flags adorn the stage in what was almost a reverse-minstrel. This made it appear that Elvis was intentionally, via placating the unruly crowd at Russwood Park, breaking out from the Southern political hegemony. Here, Butler nearly breaks the fourth wall to leer into the camera in order to sing “Trouble.” We get it.

The Washington Post is only half buying this snow job.

“So did he appropriate? Yes and no,” [musicology professor at Miami University Tammy] Kernodle said. “It’s not an easy question. It’s not black and white.”

and also via WaPo:

“I am not defending Elvis as a civil rights leader,” [writer/director] Luhrmann continued. “He was never a political creature. … Col. Tom Parker was always banging in his head from Day One, ‘Don’t talk politics.’”

“Elvis” stops short of making Presley into a Black Lives Matter rioter ready to topple a Jefferson Davis statue, but it inadvertently perpetuates the myth that negates the value of his cultural hodge-podge of influences. The truth is Presley was as much influenced by The Blackwood Brothers, King of Country Jimmie Rodgers, and J.D. Sumner as he was Fats Domino, Ivory Joe Hunter, and Big Boy Crudup. To that, “Elvis,” despite being a masterpiece, goes against its own general premise.

How a delivery truck driver from Tupelo became (arguably) the world’s most easily recognized musical icon is proof that talent does not often recognize the impenetrable socioeconomic boundaries imagined by privileged academics who have never lived a day the way a young Presley did.

One need only go back to Presley’s first single — “That’s Alright Mama” (featured prominently in the film as the runaway breakthrough hit it was), and on the flip, the white bread Bluegrass staple “Blue Moon of Kentucky” — to see (and hear) where Elvis broke down boundaries just by being true to himself and his upbringing.

But we won’t be cruel: “Elvis” was a triumph and one of the best slices of musical Americana we’ve seen at the theater, at least since “Walk the Line.”

“Elvis” premiered June 24 and is distributed by Warner Bros. Pictures.