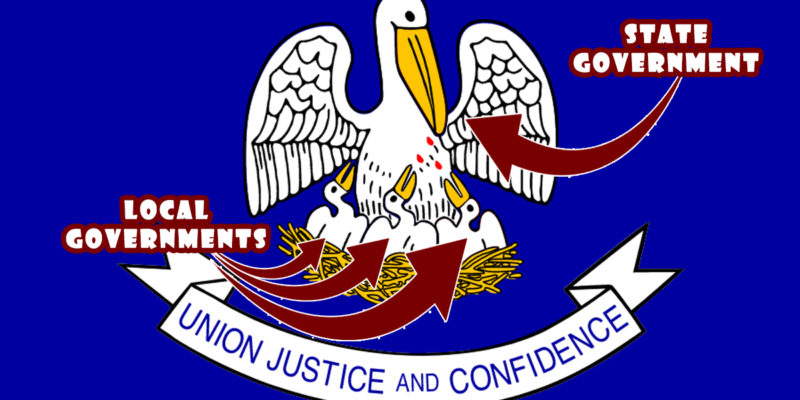 Perhaps it’s because the eventuality actually hasn’t manifested, but when it likely does Louisiana in the near future then must act to put into place laws to prevent local government defiance of its prohibitions against abortion except when the mother’s life is endangered.

With the state poised to join others in making this its law if, as expected, the U.S. Supreme Court rules that regulation of the practice properly belongs in the hands of the states, dissident local governments in those states have begun to plot strategies to circumvent that and encourage abortion wherever possible, even if illegal. For example, a small Philadelphia suburb voted to prevent its police force from arresting anyone breaking a law against performing an abortion, if the state were to have one; it doesn’t, like Louisiana, have any law set to come into force doing this. In a related fashion and in a state with such laws already on the books, Austin would force police to put investigation of a suspected abortion last in priority and prevent the city funds from use to investigate, catalog, or report suspected abortions.

Having a relatively large Catholic population, Louisiana is perhaps the most pro-life state in the country. Still, conceivably some large cities with leftists in the control of the mechanisms of government could try to defy state laws on the matter preparing to come into force, so state policy must cut this off. After all, evil doesn’t stop being evil merely because it occurs in a different physical location.

Several responses suggest themselves. One could follow the lines of past legislative efforts in other issue areas such as local governments declaring themselves “sanctuary” cities for illegal aliens, where the state would reduce or cut off funding streams to such places (the issue lost its salience when the Republican Pres. Donald Trump Administration aggressively enforced laws prohibiting the presence of such people in the country, but increasing laxness on this account by the Democrat Pres. Joe Biden Administration may make laws like this something to consider again).

Another tactic would penalize local government public safety employees by withholding supplemental pay from those working for a government whose local laws have the practical effect of defying the statutes coming into force. After all, the justification for Louisiana’s unique handing out of this extra pay is that these officers enforce state law, so if they are enjoined from doing so then why should they receive the bonus? In turn, such a change might induce local officers to lobby their policy-makers to shelve obstructionist laws.

Finally, the Legislature specifically could give the task of investigation and enforcement of violation of the laws coming into force to the Louisiana State Police and the attorney general’s Bureau of Criminal Investigation. If local governments won’t make a serious effort to enforce these laws, these agencies can take up the slack (perhaps combining this with docking grant money, the sequestered funds could be transferred to fund state-level investigation and enforcement in those jurisdictions).

It’s too late this session to consider such laws and appropriations instructions, and in any event as of this writing Supreme Court jurisprudence continues to claim that abortion somehow is part of an undefined fundamental right to privacy that states can’t breach. But that likely changes before the month is out, and in the spring of 2023 the Legislature would be wise to obviate any attempt by a local government to undercut its laws in this issue area.

Interested in more news from Louisiana? We've got you covered! See More Louisiana News
Previous Article CROUERE: The Death Of The Cell Phone Bill Would Be A Rare Win Over RINO’s
Next Article Two Quick Thoughts On That Gun-Grabbing Ghoul Yammering On TV Last Night