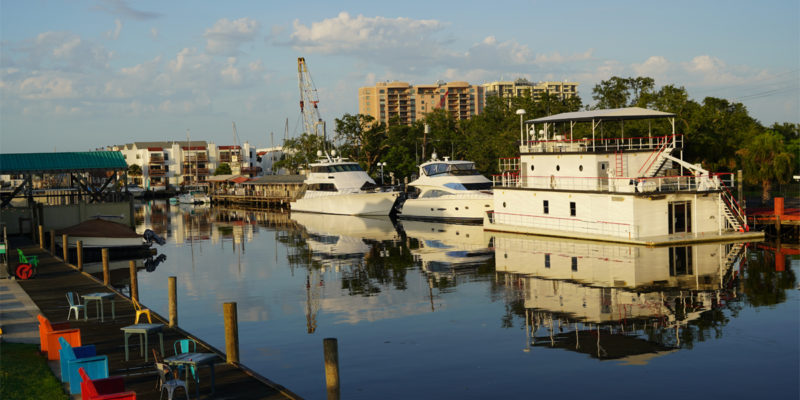 Following Katrina, former New Orleans Levee Board Commissioner Richard Sacket, obtained a lease for site on the west side of the New Basin Canal along South Roadway. Sacket moved to Florida and began designing a 15-story Condo Project in the canal.  The 150’ tall building would have been 90’ over New Orleans building ordinances, which limit building height to 60.’  Marina residents compared the Pearl to the Hard Rock Hotel collapse of 2019.

After Council Member Kristen Palmer’s 2021 election defeat. Sacket reduced his proposal to 65’ high. Palmer had been instrumental in getting the height variances for the Hard Rock Hotel in New Orleans which collapsed during construction in 2019.

At the June 9, 2022 Public Hearing of the state’s Department of Natural Resources sixty residents including those outside the marina came to express their opposition for over two hours to the commission on the Pearl proposal.

Over a dozen concerns were expressed including: The impact on sewage in the marina. Already the sewage line has problems and how much impact will the addition 32 units add, the impact of pile driving on the already sinking land in the marina, boat navigation in the New Basin Canal would be restricted, will the units be sellable with increased flood insurance costs, the impact on parking and egress into and out of the building, how many extra days of flooding with the Pearl add to the marina from simple rain storms when pump #12 is turned on, lost business to the Southern Yacht Club and other businesses due to the extra days of flooding caused by the Pearl,  the impact on New Orleans film industry which films in the marina.

Engineers for the Pearl Luxury Condo Project admitted the project would increase flood events in the New Orleans Marina.  During a presentation to extend a Louisiana Coastal Management they advised the Pearl Project would require 800 cubic yards of fill and raise water levels 8 to 10” in the New Basin Canal.

During the Summer of 2021 meeting, residents noted that Sacket’s development would block sunset views from restaurants and residents on the east side of the New Basin Canal.

One resident representing the Lakefront Airport area, suggested Mr. Sacket take his project to near Lakefront Airport and not force it in a location where it is not wanted. Another suggested the Pearl be located inside the flood wall near the existing high-rise condos.

At the same time, since residents of Bucktown expressed no desire to have traffic and other problems of commercial development in their neighborhood, Jefferson Parish politicians are pushing to develop the west side of New Orleans West End.

If Bucktown and Jefferson Parish residents want more commercial sites, then their neighborhoods are the more appropriate locations.

Local politicians should realize quality of life for their residents, their neighbors, and visitors to West End is more important that filling parish coffers.

By 2019, a colony of pelicans had taken over the old Fitzgerald’s site. The movie industry now uses West End Park for filming.  The boathouses are now full-time homes. It is time to let go of nostalgic memories to embrace wildlife conservation and open space in West End.

Interested in more news from Louisiana? We've got you covered! See More Louisiana News
Previous Article APPEL: Biden Is The Gift That Keeps On Giving
Next Article Now Is When Clay Schexnayder Learns Why You Don’t Do Deals With Democrats