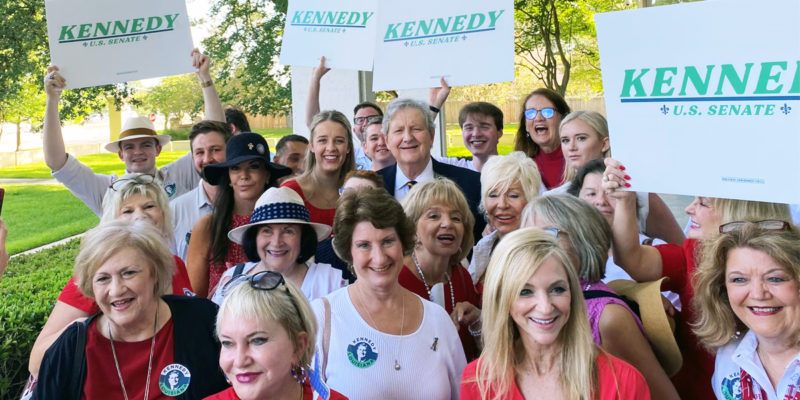 UPDATE #3: And now there are 13 candidates for the Senate. The latest entrants are Devin Lance Graham, a Republican from Gonzales, Bradley McMorris, an independent from Livingston, and Aaron Sigler, a Libertarian from Hammond.

The real action is in the House races. So far, here’s who’s running in the various districts…

UPDATE #2: Somebody named Salvador Rodriguez, who is a Democrat from Tangipahoa, has qualified for the Senate. That makes 10 candidates in the race.

Also, a couple of legislative special elections to note: state representatives Royce Duplessis and Mandie Landry have both qualified for the open New Orleans state senate seat formerly occupied by Karen Carter Peterson. And the seat formerly occupied by Rick Ward across the Mississippi from Baton Rouge is now a Republican-vs-Democrat battle, as Caleb Kleinpeter (R) and state representative Jeremy Lacombe (D) are both in. Reportedly, the former holder of that seat, Democrat Rob Marionneaux, will also run. But Marionneaux hasn’t qualified yet.

UPDATE #1: Some new folks have wandered into the qualifying list, and here they are.

For the Senate, in addition to John Kennedy, Gary Chambers, Luke Mixon, Xan John and Syrita Steib, we now have…

A couple of entries to report in House races are Katie Darling, a white Democrat from Covington who qualified to run against Steve Scalise in the 1st District, three Republicans who’ve entered in the 3rd District race against Clay Higgins – Holden Hoggatt of Lafayette, Thomas “Lane” Payne, Jr., of Perry, and Jake Shaheen of Lake Charles.

Additionally, Mike Johnson qualified for re-election today in the 4th District, and Johnson picked up the LAGOP’s endorsement yesterday (no surprise there).

ORIGINAL: We’ll be updating this post for the rest of the week as we see new qualifiers, so keep checking back.

As of Wednesday morning we’ve now got five candidates who’ve qualified for the U.S. Senate, including the incumbent John Kennedy who’s more than likely going to win a majority of the primary vote…

“Under President Biden our country is experiencing the highest inflation in 40 years, gas prices have skyrocketed, and crime is up across the country. Louisianians know what’s at stake in this election, and that is why I am running again to be Louisiana’s U.S. Senator. I promise to always ensure the voices of the hardworking men and women in Louisiana are heard, and fight against the woke policies that are hurting the pocketbooks of all Americans,” said Sen. John Kennedy.

Kennedy already has four opponents, two we’ve talked about quite a bit. Gary Chambers, the black leftist activist who’s already raised and spent more than $1.3 million on his campaign, has qualified, as has white Democrat Luke “The Alpaca” Mixon.

But there are two others – Xan John, an independent from Lafayette, and Syrita Steib, a black Democrat from Metairie who’s best known as a prison reform advocate (she spent 10 years in jail for stealing cars and burning down a car dealership, but was pardoned by President Trump as part of his criminal justice reform).

And in the House races a few qualifiers have trickled in.

Howard Kearney, a libertarian from Mandeville, has qualified to run against Steve Scalise in the 1st District.

Troy Carter, the Democrat incumbent in the 2nd District, qualified. He probably won’t run unopposed, but on the other hand Carter isn’t expected to get serious opposition. None of the incumbents are.

Brian Belzer, a Republican from Prairieville, qualified to run against Garret Graves in the 6th District. His website is awfully busy – but he’s got a cool-looking LSU shirt on in his picture. We thought that was a nice touch.

And of the non-federal races down-ballot, perhaps the most interesting one is a judicial race for the First Circuit Court of Appeals, in which two Republicans – former state representative and current family court judge Hunter Greene and 19th Judicial District Court judge Beau Higginbotham – are vying against Democrat 19th Judicial District court judge Don Johnson. Johnson, our readers may note, is currently presiding over the Hope Medical case which challenges the constitutionality of Louisiana’s abortion ban law. There’s a reason Louisiana Attorney General Jeff Landry is pushing to get the case pushed up to the Louisiana Supreme Court, and it’s that with Johnson running for re-election against two Republicans it’s obvious he’s going to decide it based on politics.

More as the qualifiers are posted.

Interested in more national news? We've got you covered! See More National News
Previous Article GOP Politicians Pandering To The Advocate? Why On Earth Would You?
Next Article AVALLONE: Four Out Of Five Dentists Agree…