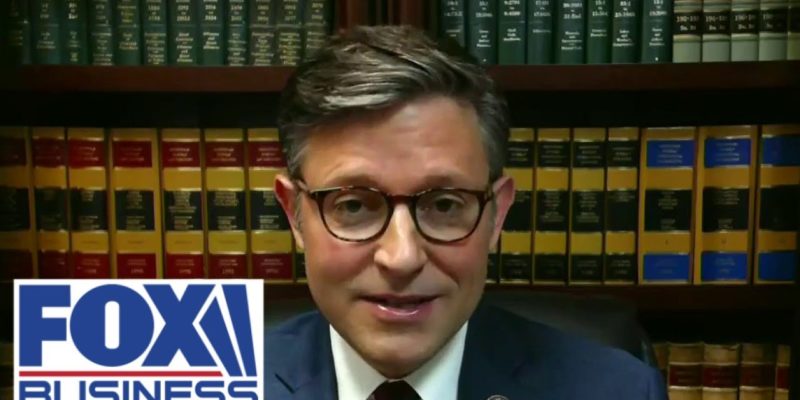 One of our favorite congressmen Mike Johnson (who by the way wrote the foreword for my new book The Revivalist Manifesto, the reviews of which have been quite good and you should buy it today) was on the Fox Business Channel with Maria Bartiromo this morning.

It was a short appearance, but Johnson didn’t need a whole lot of time to blow away the idiocy of the Biden administration’s arguments about how they’re not at fault for inflation.

The truly disgusting piece to all this was the fact that the president, or whichever gormless twenty-something manages his Twitter, actually sought to blame gas station owners for the price of gasoline and demand they lower their prices and take a loss on gasoline. This happened only a couple of days before it came out that Biden was selling off our Strategic Petroleum Reserve to foreign buyers, including the Chinese.

China is getting below-market oil from Russia because they aren’t participating in the Biden boycott of Russian oil, and we’re also selling them crude from the SPR.

Johnson notes this. He doesn’t go as far as Tucker Carlson did last night in calling for Biden’s impeachment over the selling off of the SPR to foreigners, but he certainly makes the point that this is unacceptable.

It really does start to become obvious that what’s going on here is malice and not incompetence. There is incompetence, to be sure – but it’s the kind of willful incompetence that points to malice. For example, the hiring of Karine Jean-Pierre as Joe Biden’s publicist, in Carlson’s framing, is malice. Jean-Pierre is terrible in ways which are unprecedented for a White House press secretary, and it’s impossible to sell the idea that the people handling Biden are just that bad at personnel. They wanted to inflict her on America for a specific reason – she’s black and a lesbian, and if you dare to notice she’s an utter nincompoop then you’re both a racist and a homophobe.

It’s more important to foist her and the identity politics she represents on an unwilling population than it is to have someone in that job who knows what she’s doing.

And that relates to the Strategic Petroleum Reserve. A true effort at bringing down gas prices without plunging America into recession would focus on increasing domestic supply of oil, and this is something Team Biden categorically refuses to do despite economists and industry experts screaming at them to enact a number of tried-and-true policy options everyone knows will work. Instead Team Biden pursues scarcity in oil to deprive Americans of an easy supply of fuel, and this is intended to force the poor and middle class onto public transportation while the rich buy electric cars.

And if you think this is done to “save the planet,” you’re grossly mistaken. They know very well that China and India, the two most populous countries on earth whose combined population is nearly ten times ours, will be increasing their consumption of fossil fuels for the time being – so any reduction in carbon emissions which might come from this enforced scarcity in America would be a drop in the bucket. They’re economic illiterates, but this basic logic doesn’t escape them.

So it’s punishment. It isn’t idealism. This is about victimizing average Americans and creating dependence.

It’s evil. And good for Johnson that he’s calling it out.

Interested in more national news? We've got you covered! See More National News
Previous Article SADOW: Louisiana Needs To Give California Taste Of Its Own Medicine
Next Article The Cowardice Of The Louisiana Supreme Court Is Not Impressive