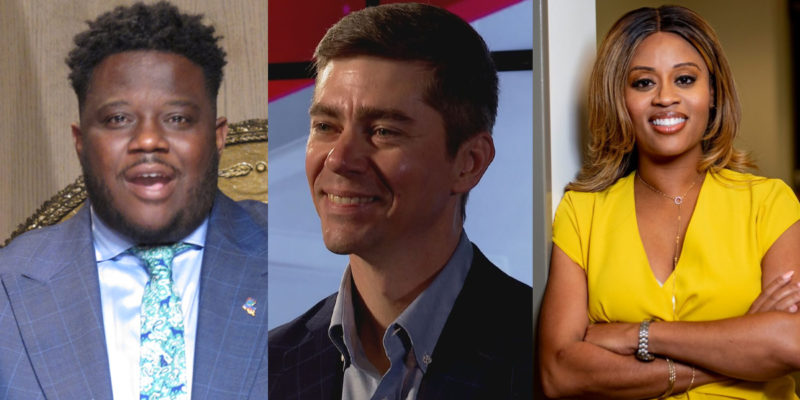 …it certainly does come off as a desperation heave by the monied white Bourbon Democrat ruling elite against the party’s black majority. When they engineered an endorsement not of Gary Chambers or Luke Mixon but of both of them AND Syrita Steib, it was a craven, transparent move which really ought to infuriate Chambers and his supporters and motivate them to take that party over all the sooner.

If you missed it, here’s what we’re talking about…

On Saturday, August 13, the Louisiana Democratic Party’s ‘Democratic State Central Committee’ endorsed three candidates to challenge incumbent Senator John Kennedy in the upcoming race for U.S. Senate. Those candidates include Gary Chambers Jr., Luke Mixon and Syrita Steib. While the triple-threat endorsement was intended to unify the party, it did not appear to have that desired effect.

Going into the meeting, the executive committee favored Chambers, but committee members debated a dual endorsement of Chambers and Mixon. Ultimately, the committee passed a resolution by a vote of 80-36, leading to the endorsement of three candidates: Chambers, Mixon and Steib.

Following Saturday’s vote, Chambers, a Baton Rouge-based social justice advocate, spoke out against the vote. He said the party’s chair, Katie Bernhardt, told him last October that “a Black man could not win statewide,” noting as well that he believes Bernhardt favors Mixon. The chairwoman has responded since then. In an official statement last night, Bernhardt said in part:

“The members of the DSCC spoke with that vote, and it is our duty to uphold the will of our members. We believe that all three endorsed candidates for U.S. Senate, along with our endorsed congressional candidates and all democratic candidates for PSC are strong candidates who can get voters to the polls. We will be here every step of the way to support all of them in that endeavor.”

Yeah, it’s fair to say Chambers wasn’t happy about how things went down…

Listen to the members of the Louisiana Democratic State Central Committee ask for a chance to vote for me yesterday. They were robbed of that vote yesterday by the chair of the state party Katie Bernhardt.

Oh, wait – there’s more where that came from… 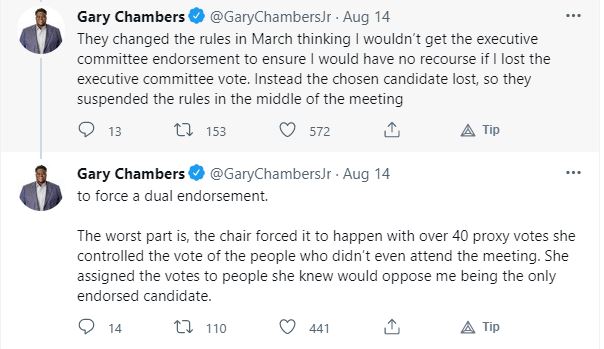 At the Discretion of the Chair Katie Bernhardt every rule the @LaDemos followed to endorse other candidates in the same meeting, the chair threw out to help split my endorsement with her candidate @lukemixonla.
Katie told me “I don’t think a Black man can’t win in Louisiana” pic.twitter.com/DCLpOSKlsy

At one point during the DSCC meeting the police were called to our side of the room, as if they were anticipating something happening. Cops didn’t go any where else in the chamber, it was an intimidation tactic by party leadership.https://t.co/TlriLvMg1K pic.twitter.com/nRRa0cwzMa

We’re showing you all of this not just because Gary Chambers, when he gets all full of righteous indignation about how he’s been done wrong, is a hoot and a holler. We’re showing it to you so you can see just what lengths Katie Bernhardt and the white Democrat power gang will go to in order to hold on to control of their party.

Which by rights they should not have. Of Louisiana’s 1.193 million registered Democrats, 60.2 percent of them are black. When more than 60 percent of a group’s membership is of a certain persuasion, it’s not unreasonable to think that organization should be represented by such a large majority.

Bernhardt and the old white Bourbon Democrat crowd, who make up in money what they lack in warm bodies, did everything they could to rig things for Mixon. They set it up so that all decisions on endorsements would be made by the Executive Committee, which was supposed to be easier to control and “smarter” than the ordinary State Central Committee. Then the DSCC would be a rubber stamp for the Executive Committee’s decision; they could vote it up or down, but that was it.

So Chambers went out and convinced nine of the 18 Executive Committee members to endorse him, against seven for Mixon.

And Bernhardt then tossed those rules. Then she made sure she had 50 proxy votes of DSCC members who didn’t show at the meeting in her pocket.

What she couldn’t do, because if she’d tried it you’d likely have had a motion to vacate the chair and a coup d’etat upending the party’s leadership structure right then and there, was to get an endorsement for Mixon. The best she could get was a tandem endorsement.

And they had to throw in Steib, an interesting personage who’s done some noteworthy things after committing some horrendous crimes in her youth but has absolutely zero business running for the U.S. Senate just four years after getting out of jail, in order to dilute the endorsement. Because if Chambers and Mixon had been the endorsees it would have looked like the Democrats were split right down the middle.

Which of course they aren’t. Chambers is likely to pull twice the vote Mixon will.

Or he was. Because the dirty move here is to include a minor candidate with zero money incapable of getting more than two or three percent of the vote without help, because she’s black.

Thus attempting to split the black vote with Chambers, in an attempt to have Mixon perhaps ride a narrow lane into second place and then perhaps preserve some legitimacy for the white Bourbon Democrat elite.

Chambers is right to be furious about it. That the cops were called to police his supporters with the open expectation they’d riot on the floor of the state capitol was pretty insulting, and you could spend all day unpacking it.

It seems like this is very likely to backfire, and it ought to. The John Bel Edwards/Richard Carbo/Katie Bernhardt/James Carville crowd are the most discredited people in Louisiana politics, and rightly so given the utter destruction they’ve wrought to this state. It’s long past time that the black community wrested control of the Democrat Party from those people – and in fact, Louisiana would be much better off were black victims of our bad economy and worse government able to have a real voice in negotiating with the state’s ideological GOP majority without patronizing interlopers like Edwards speaking for them.

The Ronald Greene case proved that. But so did Saturday’s carnival.

Interested in more national news? We've got you covered! See More National News
Previous Article SADOW: The Law Is Settled, But The Louisiana Abortion Fight Isn’t Over
Next Article APPEL: Why Is It Trump’s GOP Now, Do You Think?