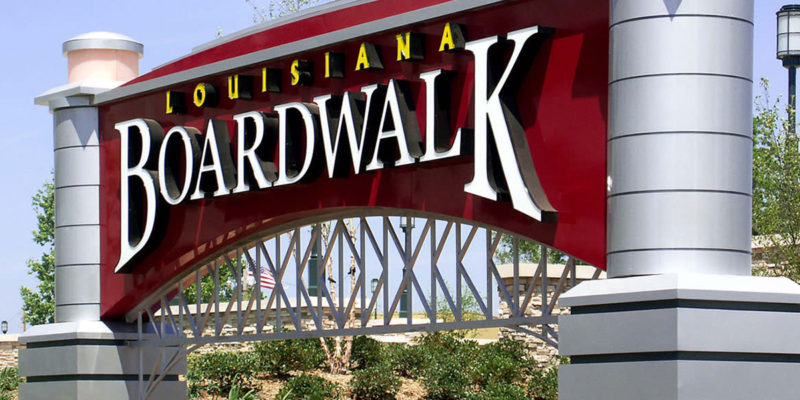 If you want another reminder illustrating the futility of activist government pursuing a government-as-venture-capitalist model that robs taxpayer wealth, witness the recent sale of the Louisiana Boardwalk in Bossier City.

Last week it was announced that a buyer had closed on the property listed a few months ago, scooping up the 560,000-plus-sqaure foot outdoor mall for $30.5 million. Commencing operations in 2005, at that time Bossier City’s government hyped the opening, crowing about how if they built it, they would come from all over, pumping sales tax and property tax receipts into city coffers.

Even a cursory inspection of the facts casted doubt that the city’s development expenses to bring infrastructure to the builders – at a cost of $20 million, although part this went to the separate Bass Pro Shops that had opened a short time earlier – could produce subsequently tax revenues to justify it. The collection of mostly retailers with a few food service establishments and a theater would have to attract a lot of purchases that otherwise wouldn’t beggar other Bossier City retailers – principally the then quarter-century-old Pierre Bossier Mall – and kick off a spate of nearby development that did the same.

Approaching two decades later, that’s debatable. Eventually a hotel just to the south and a casino just to the north sprang up, but little else has come to the area, and the majority of visitors still hail from the area (near as can be told, since it’s been a long time since such statistics were released to the public). Worse, the city over the years added another $15 million in improvements. Still, those expenditures are what local governments are supposed to do: build roads, drainage, and sewerage, and the ancillaries that go along with those things.

But Bossier City government went much further. Even though developers were willing to sink $150 million into the project, the city decided to throw them a free parking garage worth $21.5 million at taxpayer expense. It’s not like there could be some general public use for it; it only made sense for use by the Boardwalk, subsidizing its operations.

This was a stupid decision on its face, even as city leaders gamely tried to justify it despite the financial math not working at all to their favor. Simply, the city trust fund that gulped in casino revenues then was taking in good chunks of money, and elected officials wanted to spend a portion on a bauble that they could point to proudly and say they erected that monument.

Clearly, the developer should have paid for something that benefited only that entity, and history only has become unkinder to the view of the Bossier City big spenders then in city government – and now, because the trio of no party Jeff Darby, Republican David Montgomery, and Democrat Bubba Williams still sit as councilors, who approved and led cheers for the garage gift every step of the way. After a few opening years of decent success, the property has slid downhill ever since.

It’s not difficult to understand why. Trends have gone against the mall concept, particularly as more sales migrated online. In part to counter this, the Boardwalk would mutate towards more of an outlet store orientation. However, local trends haven’t helped as well, as northwest Louisiana, including Bossier City, has stagnated in population growth. Moreover, the one area of real growth in the region, Bossier Parish itself outside of the city, geographically doesn’t lend itself to its denizens visiting any area mall, with residents outside city limits preferring to hit a string of retail establishments north of Interstate 220. As a result, a third of the Boardwalk’s space lies unleased.

At one time in foreclosure, in 2011 it sold for just $80 million, a nearly 50 percent haircut from its building costs. And the latest sale chops more than half off that previous valuation, which in property tax terms slices over $100,000 out of Bossier City property tax revenues. To put it more dismally, considering price inflation is up over 55 percent since the start of 2005, the taxpayer dollars plunked down then for the garage equate to over $33 million today; in other words, Bossier Citians put up more money directly into the development than it’s worth now.

It could be worse. Buffeted even more severely by these trends, Pierre Bossier Mall recently and dubiously made the top five list nationally for mall properties that have declined in appraised value, with an estimated drop of 85 percent to a $10.5 million valuation. The space where Sears stood in it four years ago is on the market for a lousy buck.

Fortunately, in recent years the Council has lost its previously voracious appetite to shower money on such largesse that produces negative taxpayer return, but none of Darby, Montgomery, or Williams have apologized for their horrid decision-making in this episode, part of pattern that flushed over $100 million of taxpayer resources down the drain. Don’t expect any as they hope this latest reminder of their mistakes fades from public consciousness.

Interested in more news from Louisiana? We've got you covered! See More Louisiana News
Previous Article SCALISE AND ELZEY: Remembering The Afghan Debacle, One Year On
Next Article BLANCO: Merrick Garland And The Tools of Dictators