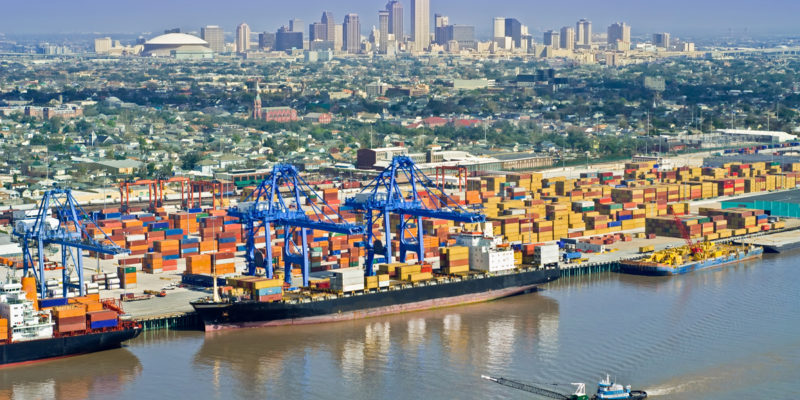 Cities that are prosperous and attractive have a core economic reason for those benefits. As I have written many times NOLA has no such core, and worse NOLA’s leaders show no concept of the significance of not having such.

Now let me try something that is unheard of in the City That Care Forgot, let me try to draw together a few trends and suggest a strategy for the future. But first let me set out the goals of my plan, cut poverty by 25% in ten years and reverse business and citizen out-migration within five years.

The fundamental principle of this plan is that a rising economic tide lifts all boats. In order to accomplish that we need to enhance our assets and rebuff those who would have us chase after someplace else’s last year’s strategy.

Many years ago, New Orleans lost its status as the financial hub of the South, its position as Queen of the corporate base for international trade, and as the second headquarters city for energy. Instead of taking bold steps to reverse or supplant these negative trends, local business and political leaders chose to let them go and to ignore any aggressive strategy in favor of letting the “Good Times Roll.” So effectively the economic drivers that gave us our vitality through most of the later 20th century are lost.

What remains are two viable economic engines: tourism and the Port. In terms of tourism, it has served us well in a community that has so many un- or under-educated people, people who are willing to work for low wages and limited growth potential. The problem is that we are near or are at the full capacity of our tourism potential. National trends have limited conventions, the French Quarter is only so big, and the cost of travel and lodging are skyrocketing. We cannot look to tourism as the growth engine we need.

The Port has changed dramatically over the years, becoming to the greatest extent a “pass through” entrepôt for cargoes that arrive and go somewhere else or that depart. Gone are the days of manufacturing related to cargoes, much of distribution, and virtually all corporate presence. Gone are the days that high-wage manual labor jobs created a middle class, now supplanted by mechanization.

What the Port does offer however is growth potential. We are exiting a time of sustained globalization; the long-term trends will be away from depending upon cheap goods from an increasingly militant China and a shift back to domestic or regional manufacture. Louisiana and New Orleans in particular are in a unique posture to engage in a strategy to center a major segment of our economy upon this trend.
There are three growth areas that can be built upon: distribution, value-added manufacturing, and, so important to New Orleans, corporate business to include not only maritime, but also banking, insurance, and so on. As middle- and upper-income jobs grow in these areas so to the multiplier effect will support all kinds of economic energy and prosperity.

At the state level our strategy must answer a key question: why is Louisiana attractive to high-capital, low-employment primary manufacturing, but not to high-job-creation secondary manufacturing?

For instance, we make volumes of primary chemicals and plastics that are just shipped away to be used in high-employment plants for the manufacture of finished goods. These can be looked at as a source of pseudo-raw materials for manufacturing here. Why is Louisiana the only southern state without an automobile plant or a major car parts plant? There are fundamental reasons for these questions that must be addressed if any strategy is to be rolled out. Not getting the state to reform certainly dooms any local strategy but let’s assume new leadership will satisfactorily address them.

At the local level New Orleans must ask the same form of questions and resolve to respond to them. What policies can we employ to lure back our big banks, insurance companies, all the FIRE industry sector? How can New Orleans help other parishes that are more suitable for manufacturing and distribution, thereby making Port operations here stronger and making the City attractive to corporations that want to reside near international trade centers? How do we build the new container terminal in St. Bernard Parish that will feed the cargoes of the future? How do we make the Big Easy a place business will flock to, not flee from?

Are there other elements to a long-term strategy that would overcome the weaknesses of the tourism sector and help build a growing economy? Possibly, but none that are centered upon our innate assets. In effect we would have to create something from nothing, or as I noted, chase someone else’s yesterday’s dreams. Shiny objects are a gamble at best, they don’t hold out the promise of achieving reduced poverty or enhanced in-migration.

We have a low growth base of the tourism sector that sustains so many of our low-income citizens, but it’s critical to focus on re-building a middle- and upper-income economy based upon our natural asset, based upon trade. Balance is the key and balance is what has been lacking for a generation.

Set a goal, reduce poverty, increase in-migration, develop a strategy re-build all elements of our trade sector, and replace economic malaise with growth and prosperity. Above all, fix Louisiana and DON”T chase shiny objects.

Interested in more news from Louisiana? We've got you covered! See More Louisiana News
Previous Article ALEXANDER: Biden Vilifies Millions of Americans in Call for “Unity”
Next Article Most Recalls Are Hopeless Causes, But Is The LaToya Cantrell Effort Different?