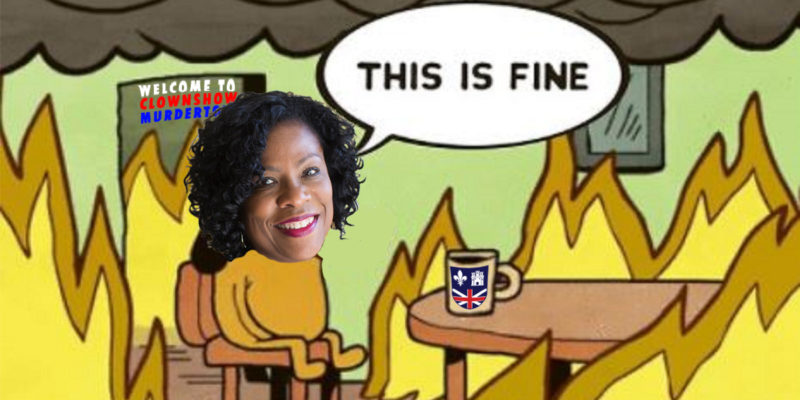 We’ve been talking for a week about the Allie Rice murder and how it has the potential to be a Black Swan event that essentially drives what’s left of the Baton Rouge economy straight out of the city. But we really shouldn’t confine that analysis to the horrendous crime that robbed the Rices of their 21-year-old daughter.

Because horrendous crimes have become Baton Rouge’s chief stock-in-trade. That used to be things like athletic excellence at LSU and gasoline and other petrochemical products at ExxonMobil’s refinery, or even stupid laws at the state capitol.

Now it’s murders. Because this is Clownshow Murdertown.

Ahead of a press conference being held Thursday by Mayor Sharon Weston Broome and Police Chief Murphy Paul to discuss violence in Baton Rouge, law enforcement is investigating four reports of gunfire in just over four hours in and around the capital city.

One person was found dead with multiple gunshot wounds at an apartment complex on West McKinley Drive shortly before midnight on Wednesday, the Baton Rouge Police Department said.

Lastly, BRPD investigated two separate reports of shots fired only a mile apart off Winbourne Avenue. Sources say no one was taken to a hospital, but crime tape was still present, indicating an active investigation.

All of this takes place only hours before a news conference with Mayor Sharon Weston Broome and Police Chief Murphy Paul is scheduled Thursday at 12:30 p.m. to discuss recent crime.

We could forecast what we expect Broome and Paul to say at that press conference, and you can, too.  It’s almost assuredly going to be a pep talk about how hard our betters are working to insure we’ll be safe while announcing exactly zero policy changes of substance whatsoever. And with BRPD being short 120 officers from its full complement, it isn’t like there’s a lot they could do anyway.

Anything short of Broome firing Paul and announcing some highly-respected hardass who’ll take over the BRPD, or maybe a merger between BRPD and the East Baton Rouge Sheriff’s Office in hopes that a consolidation would lead to better leadership and communication, probably won’t impress us.

Really, the problem is far bigger than some clownish politician and her hand-puppet police chief could ever solve. Dead Baton Rouge is full of monsters, and they’re multiplying, and all the things Sharon Broome is going to say will tamp down crime – jobs in the hood, education and so on – are just hot air.

You have to get the monsters off the streets. Period. All of that “root cause” stuff solves crime – maybe – in 10 or 20 years. But none of that was done, and the house is on fire now.

If John Bel Edwards hadn’t cratered the Louisiana State Police to the tune of it now being short 300 officers from its full complement, we’d say bringing in the state troopers to supplement local law enforcement and then starting to crack down on the worst neighborhoods would be the right call. But that isn’t going to work.

At the rate we’re going, neighborhood militias are due to spring up. It’s really just a matter of time. If we’re going to have gun battles in Hundred Oaks and gang rub-outs at the Mall of Louisiana, the citizenry isn’t going to have a choice but to protect itself.

Interested in more news from Louisiana? We've got you covered! See More Louisiana News
Previous Article SADOW: Louisiana’s Poised To Have Its Most Powerful Congressional Delegation
Next Article There Is Some Good News After All In Louisiana