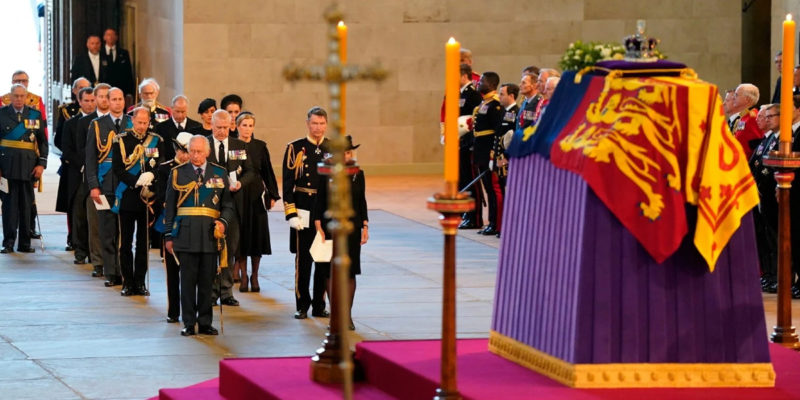 On Monday Britain and the entire Commonwealth will lay to rest their longest-reigning monarch.  Queen Elizabeth II is gone.

In America there are two schools of thought regarding the British royals: fascination and a befuddlement that often borders on contempt.

And neither group tends to conceal their leanings.

The former gushes over all things royal and a walk into their living room may reveal tea cloths and small collectible plates bearing the images of the more popular figures in the House of Windsor.

Furthermore it’s not as if the queen or now king actually governs or wields actual military or political power.

After all, we (meaning men who are 12-14 generations removed in life and subject for removal from removal history books) fought a war to rid America of a king!

Never mind that the original grievances of the colonists were directed at parliament and not Mad King George, though the first truly English Hanoverian made every effort to assume the role of lead villain once hostilities commenced.  If Hamilton got anything right it was that character.

So what’s the point of having a queen or now king?

When questioned by Americans on why they still have a ceremonial monarchy, Brits tend to blithely defend its existence as being good for tourism. I think that’s more of an attempt to avoid having to endure a lecture from someone who was taught civics by a football coach about the virtues of federal republicanism followed up with citations of the American victory at Yorktown and perhaps in a few other military engagements that either were fought after the revolution or didn’t involve the British at all.

But mostly we can’t grasp the concept of even a constitutional monarchy simply because we aren’t British.

America was founded not on a blood line but an idea.

To define American culture is nigh impossible as that definition changes from place to place. And now tweet to tweet.

As we are a young multicultural nation, we have Americans but not an American people. England has both, those whose ancestors lived there for a millennium or longer and non-English immigrants who possess English citizenship.

And the monarch is both the first Englishwoman/man and the leading representative of the country and commonwealth though not the government.

One of the most remarkable aspects of the mourning period was the near universal praise from British celebrities, something unimaginable in the US where obnoxious disagreement is the highest virtue.

Generally musicians, athletes, and actors go through great pains to be viewed as anti-establishment. Yet England’s most famous professional athlete David Beckham went far beyond a social media gesture to express his administration for the queen, donning a suit and cap and queuing for 12 hours at 2 AM even though he was offered VIP front of the line privilege.

Even the Sex Pistols’ Johnny Rotten (John Lydon) signaled disgust over the hucksterism of the band’s signature 1977 anti-monarch song “God Save the Queen” (with very different lyrics than the national anthem).  Lydon then followed that up with a tweet showing a undefaced image of Queen Elizabeth accompanied with a brief condolence with the words “send her victorious,” a line from the “other” version of GStQ.

Elizabeth was not famous for being famous but for her bearing. Elizabeth was the embodiment of national servant trading the regalia of princess for a military uniform and trained to repair army vehicles during the Second World War.

My two favorite instances of Elizabeth doing her duty were in her later years.

During the COVID pandemic the queen knighted World War II veteran Captain Tom Moore for raising over £30 million for the national health service by walking laps in his backyard. Here were two elderly members of what Americans call the Greatest Generation and who were once engaged in the fight to save their nation from Nazi tyranny having a moment in a courtyard.

And then there was Elizabeth’s final public act, asking Conservative MP Liz Truss to form a new government the aftermath of Boris Johnson’s resignation as prime minister.

Elizabeth, dressed more like a pensioner than a monarch looked spry and cheery as she exercised this formality at Balmoral Castle.  Two days later the 96 year old queen was gone,  having worked to the very end.  She had did her duty up until drawing her final breaths.

At a time where small businesses continue to fold from a lack of staffing as people have become for too accustomed to idleness during the pandemic lockdown, the nonagenarian had a more productive five days before her death than many able bodied people experienced during that same period.

As queen she made a point of building relationships with foreign leaders, especially American presidents. If the prime ministers who served under her reign were the building blocks of the British side of the Anglo-American Alliance then Elizabeth was the mortar.

Elizabeth wasn’t our queen but she was America’s great friend.

Her example of dignified bearing and commitment to service ought to viewed as a bar for her descendants and public officials to attempt to reach.

Interested in more national news? We've got you covered! See More National News
Previous Article THE TAKES: LSU Fights Back To Knock Off Mississippi State, 31-16
Next Article GARLINGTON: If Leftist Officials Can Wear Pentagrams, Folks on the Right Should Carry the Cross