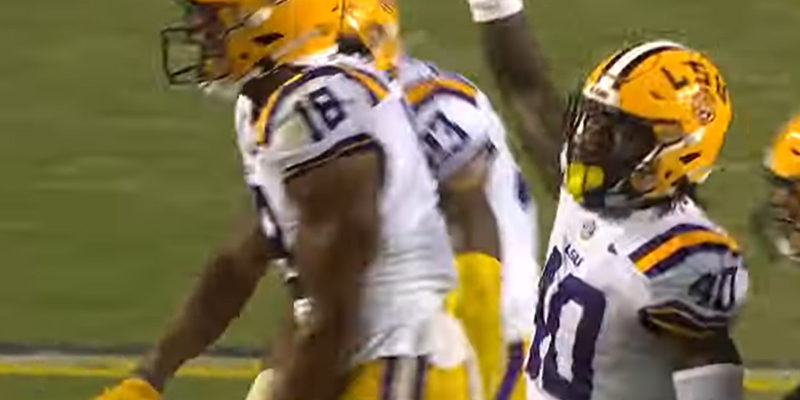 It wasn’t what you’d call a pretty win, and for most of the game it didn’t look like it was going to be a win at all, but Saturday night Brian Kelly’s LSU Tigers roared back from a 13-0 deficit to post an important SEC-opening victory in front of a not-quite-full Tiger Stadium crowd.

Here’s what we thought of the action…

If that’s what Matt House has in store for LSU’s defense, it’ll do nicely.

State managed a couple of touchdown drives in the first half, both punctuated by long runs when LSU lost gap containment, but otherwise you really can’t defend a Mike Leach offense any better than the Tigers did. State came into the game averaging 486.5 yards per game, but all they managed was 289 yards on the night against the LSU defense.

And the pass defense was especially good. State QB Will Rogers came into the game completing 79 percent of his passes but he was only 24 of 42 (57 percent) for 214 yards (5.1 yards per attempt), one touchdown and one interception. That’s the lowest completion percentage of Rogers’ career and the least passing yards since the 2020 Armed Forces Bowl win over Tulsa.

Rogers was confused and under pressure all night long. He was sacked four times, and rattled for most of the second half. And LSU did a terrific job at what a defense has to do against an Air Raid offense – they tackled exceptionally well in the open field.

Perhaps best of all, after three games we’re starting to see an identity and a swagger around this defense.

Jayden Daniels will drive you nuts, but don’t count him out.

The stats look pretty good on the night – 16 rushes for 93 yards and a touchdown, 22-of-37 passing for 210 yards and another score, no interceptions – but to watch Jayden Daniels Saturday night was to pull out most of your hair. He spent the first half, until the final drive where he led LSU down the field mostly with his legs and then hit Jaray Jenkins on a short touchdown throw, completely out of sorts and struggled with two things he’s got to fix. Namely, recognizing open receivers, because he had them just about every time he dropped back to pass, and keeping his footwork and technique straight.

But while he’s tough to watch sometimes, Daniels seems destined to be a fan favorite at LSU – because he’s a tough SOB and a competitor.

LSU was 0-for-8 on third downs in the game and then converted six of the next seven, mostly because Daniels simply refused to lose. He stepped up his game and make big throws and big runs during LSU’s 24-point outburst in the second half.

One can’t help but feel for Daniels. He’s started more than 30 games in his college career, though only three at LSU, and he’s simply not a finished product as a passer, which is suggestive of malpractice by Arizona State head coach Herm Edwards and the multiple offensive coordinators Daniels played under in his three years there. He’s trying to catch up on a couple of years of development essentially on the fly, and because of that he’s somewhat limited when he really shouldn’t be.

You get the feeling that he’s going to improve each week in this offense, and you also get the feeling LSU’s receiving corps will blossom when he does. Along the way, it does look like Daniels can find ways to win.

It’s better than the disaster in Game 1 against Florida State, and there are some positives to take from Saturday’s performance, but Tiger special teams coach Brian Polian still has some work to do.

The good: punter Jay Bramblett averaged 47 yards on six punts, and he’s a reliable field position weapon. And placekicker Damien Ramos hit all four of his PAT’s and knocked in a short field goal. That was all right.

The not-so-good: Ramos has a huge leg for kickoffs, but if he doesn’t bang them through the back of the end zone it’s a terrifying experience. LSU’s kickoff – and punt, for that matter – coverage is very suspect. But for a holding call, LSU might have given up an 80-yard kickoff return following Josh Williams’ touchdown run that made it a 24-16 game and things might have turned out very differently.

And punt returner Greg Clayton nearly gave the ball away trying to dive on a rolling punt in the fourth quarter for no reason.

But long snapper Slade Roy hustled under a Bramblett punt and jumped on a muff at State’s 10-yard line in what was the most significant special teams play of the game, so you could say that all things considered maybe LSU won the special teams battle.

But this still is far too sloppy for comfort. Next week’s tilt against New Mexico needs to be a showcase for a special teams unit that has these mistakes ironed out, because LSU needs to win in the kicking game to have a chance in SEC play.

Maybe the offensive line is settling down a bit.

LSU ended up rushing for 206 yards and a 5.4 yard average, much of which obviously came from Daniels’ scrambles, but in this game there was a lot more productivity out of the running backs – and that’s a great sign which points to some improvement on the offensive line.

Kelly tweaked the line for the second time since the opener, benching right guard Anthony Bradford and sliding Miles Frazier down from right tackle to replace him. He then moved freshman Emory Jones into the lineup at right tackle. That means LSU has a junior, Charles Turner, at center, sophomores in Garrett Dellinger and Frazier at the guards and freshmen in Will Campbell and Jones at the tackles.

That’s a frighteningly young line, and they showed it early with four procedure penalties in the first quarter. But they got better as the game went along and by the fourth quarter they were dominating a good Mississippi State defensive line.

Kelly noted after the game that continuity on the offensive line is becoming a premium item, and he’s going to need to stick with a starting five soon so that some chemistry can form. But this group might be the one he can stick with. The size, athleticism and fight in Campbell and Jones look like they can outweigh their lack of experience, and Dellinger and Frazier are big, mobile road graders at guard. Turner managed to hold his own against a physical State front, something which was in doubt going into the game.

It was generally seen as a matter of time before Harold Perkins became a key cog in LSU’s defense, and that time has come. Perkins was all over the field against MSU, posting five tackles, including 1 1/2 sacks, and adding a QB hurry. He’s lightning-fast and he comes looking for trouble, and he’s got Freshman All-America written all over him.

But the best news is that Micah Baskerville is back. The senior, who was at one point going to be suspended and played only sparingly against Florida State because he’d been reinstated only on the Thursday before the game, is now back in the lineup and he makes lots of plays. Baskerville had eight tackles against the Bulldogs.

Linebacker play in the Florida State game had a lot to do with the loss, but with Baskerville and Perkins seeming to emerge from the pile at the two positions it might be that Kelly has shored up a weakness.

LSU’s secondary had a great game against State, but nobody played better than senior safety Jay Ward.

Kelly noted a change the defense had made in the Southern game, namely switching Greg Brooks back to a deep safety position and moving Ward from free safety to nickel. He’s a former cornerback who has the cover skills to play the nickel, but the big thing about Ward is he’s turned into a sensational open-field tackler.

Which he put on display Saturday, leading LSU with 11 tackles, including 1 1/2 for loss. Ward also grabbed an interception which salted the game away in the fourth quarter. And he knocked down a pass as well.

The safety trio of Ward, Brooks and Major Burns is really looking like a strength for LSU’s defense, and with the cornerback play being pretty solid all year minus a few mistakes here and there, it’s a better secondary than we thought it would be.

Ward really ought to be the SEC Defensive Player of the Week this week. He was terrific.

Goodwin broke a 47-yard touchdown run in the fourth quarter which supplied the final margin of victory, and he finished the game with 75 yards on nine carries. He showed off what we’ve seen glimpses of – big-time acceleration.

Goodwin isn’t big; he’s listed at 5-8 and 195. He’s fast but not super-fast. But he gets to his top gear very quickly, perhaps more so than anybody else in LSU’s backfield, and when he’s had creases so far, he’s gotten north-south and eaten up yardage.

The big story in the backfield Saturday was John Emery’s return to action, but that was something of a fizzle; Emery had a pedestrian 32 yards on 11 carries and 15 yards on a couple of catches. Goodwin, on the other hand, seems to have more of a burst.

Then again, Emery hasn’t played since December of 2020, so let’s see what happens when the rust is off. It might be that Emery and Goodwin are a decent 1-2 punch. They combined for 20 carries and 107 yards, which isn’t a bad composite performance against a good State defense.

Interested in more news from Louisiana? We've got you covered! See More Louisiana News
Previous Article Kennedy On Hannity: This Is Biden’s Inflation, You Know
Next Article BAYHAM: The Queen, At Rest