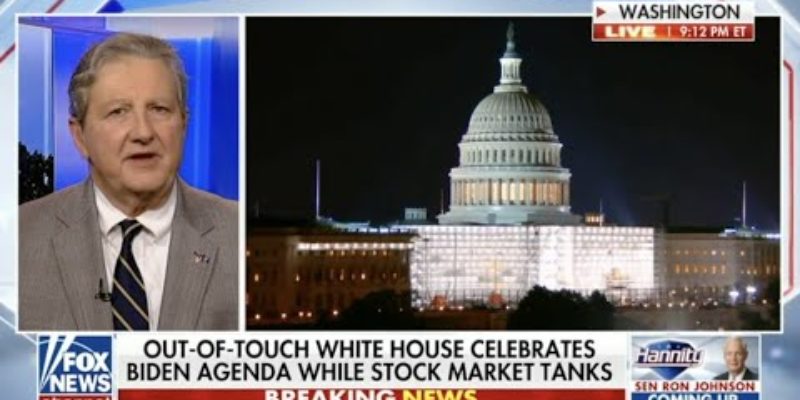 This is a John Kennedy tour de force, which is another way of saying it’s a typical appearance on cable news for one of the better political messengers of modern times.

He absolutely skewers the Joe Biden regime on electric cars, on inflation, on the Green New Deal, student loan relief…

“Inflation loves Joe Biden like the Devil loves sin” is one of the better lines we’ve heard.

And the shot that Biden doesn’t nothing about inflation other than “singing folk songs,” which is a reference to having James Taylor play that inflation party on Tuesday while the stock market crashed and dropped $1.6 trillion in shareholder value, was a big winner.

Hannity called this Kennedy’s best appearance ever on the program. He’s probably not wrong, and there isn’t a whole lot else Kennedy could do to get his re-election message out than this.

And speaking of the re-election message, he’s not in much trouble. The latest poll on the race we could find, an Echelon Insights survey from Sept. 7, has Kennedy winning in the primary…

Which would mean that the Louisiana Democrat Party will have effectively kneecapped all three of its candidates with a triple endorsement – something that, as we’ve discussed, is a feature rather than a bug because what they’re anxious to do is to screw Chambers out of a shot at taking the party over.

Steib’s six percent would be a way that might happen. Unless, and this is where things could get really fun, she was to end up with more votes than Mixon – because in the event that happened, there would be no legitimacy left at all among whites to be running the Louisiana Democrat Party.

That was the danger they faced with a triple endorsement, and now, based on the Echelon Insights poll, it’s a real thing.

And Kennedy at 51-30 against the Democrats in that poll is likely going to end up with 55 percent or more in the primary. It’s hard to imagine Democrats are going to turn out in any numbers at all given that none of the House races in the state are competitive and the only turnout-generator anywhere in Louisiana is the Shreveport mayor’s race. Republicans will turn out in droves because they’re so furious about Biden, so it’s safe to say Kennedy might be low at 51.

But if he keeps delivering haymakers on the news shows like he did in this clip, the senator might push 60 percent on election night.