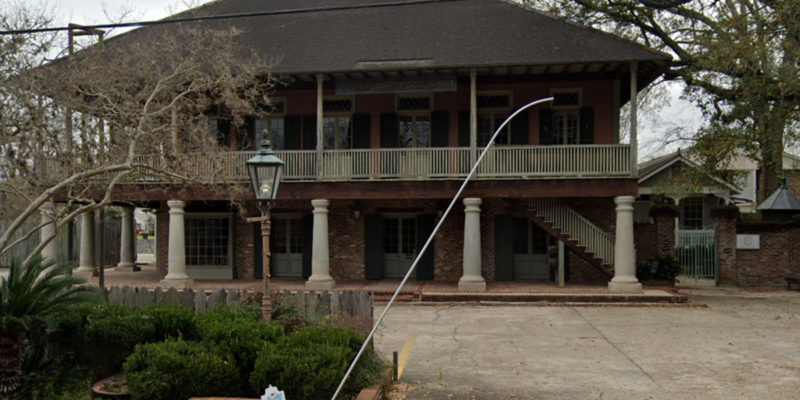 This isn’t a post about football. It’s about something more important, and LSU’s performance here looks even worse than that debacle in the Superdome in New Orleans on Sunday night.

This has to do with what was already a terrible record with respect to the First Amendment on the LSU campus. A couple of years ago LSU ranked 54th out of 56 schools rated by the Foundation for Individual Rights in Education (FIRE) with respect to free speech on campus, an indication the university is abysmal in respecting the rights of its students to speak, think and associate freely.

And that was before this…

A fraternity that is temporarily banned from operating on LSU’s campus over hazing allegations is planning to move into a spacious home located just minutes from the university, flagrantly disregarding warnings from the school.

LSU suspended Phi Kappa Psi in 2020 after the school investigated multiple reported instances of hazing at the fraternity. Some of the allegations involved a student who was hospitalized with alcohol poisoning and a reported suicide that happened in the days after that incident.

Despite Phi Kappa Psi’s suspension staying in effect through at least May 2025, the fraternity is now reportedly renting the property near the corner of Highland Road and Lee Drive, with the intent of housing its members there.

Neighbors around the area are concerned with how this will impact small businesses in the area, even though they understand that the property owner needs to make money.

The WBRZ story about the Phi Psi’s taking over that gorgeous old plantation-looking house on Highland Road just on the other side of Lee Drive south of campus focuses on the neighbors getting all NIMBY about having a frat house nearby, but it completely misses what’s important about this.

“It’s very difficult to tell an owner of a property what you can do with that property and he needs to be able to make money but on another end we really like Basel’s Market and this is going to drive them out of business,” Michael Huye, who lives in the neighborhood told WBRZ.

In a March 2022 letter addressed to the leader of Phi Kappa Psi’s national organization—based in Indiana—LSU officials said they were “unequivocally opposed” to the fraternity opening an unrecognized chapter off campus and warned that any activities on or off school grounds would likely extend the fraternity’s ban.

Huye worries if the fraternity can’t respect LSU’s wishes, he questions if they will respect the house and the neighbors nearby.

“The fact that they were removed from campus, were told not to reconstitute as a fraternity, and now they are putting a finger in LSU’s eye. That doesn’t really sit well with me,” Huye said.

Fair enough, but so what? He might be right on target about the hellions moving in next door, but if the landlord will rent the property and there aren’t zoning restrictions that would ban activities conducted there, it doesn’t matter all that much what the neighbors think.

The Phi Kappa Psi National Fraternity conducted two separate investigations by non-LSU alumni regarding the incident and implemented sanctions including the removal of the offending members and the appointment of an alumni oversight committee to monitor chapter operations moving forward.

The chapter remains recognized by the National Fraternity and is subject to the national organization’s health and safety standards and policies, as well as the laws governing all private membership-based organizations in Louisiana.

This is actually happening a lot around the country – woke universities like LSU have declared war on Greek organizations and are booting them off campus for all kinds of offenses. At LSU it was an insufficient commitment to COVID alarmism which took down the Kappa Sigma chapter last year.

And the Greeks are responding by saying “screw it” and just going off campus – formally or informally. Because the benefits of having a house on campus don’t outweigh the detriments of being hounded and harassed by anti-Greek administrators with Grievance Studies degrees and nothing else to do for their six-figure salaries.

The “hazing” the Kappa Sigs at LSU were guilty of was making pledges run errands for actives at midnight. We’re not talking about Phi Delts killing a pledge with an alcohol overdose here – which happened, and yes, that’s worth shutting down a chapter.

What did the Phi Psis do?

It appears that a pledge drank too much during a fraternity event and ended up in the hospital. The local DA, Hillar Moore, got involved and LSU banned them from having any events at all, on or off campus.

That was almost two years ago. We couldn’t find any reports of anyone being prosecuted in that case. Given that you practically have to kill somebody to get prosecuted for anything in East Baton Rouge Parish nowadays that wouldn’t be too big a surprise. So there was a big to-do about it and then nothing, and two years later the kids want to try again without being subjected to LSU’s heavy hand.

And the national fraternity is OK with the Phi Psis reconstituting their chapter off campus, and LSU is throwing a fit? If the Phi Psis at LSU who weren’t responsible for that “hazing” incident would like to have the Greek experience at LSU and they’re going to do it off-campus, why does LSU think it has the responsibility or the right to tell them what they can do? LSU is the one who gave them the choice between not being Greeks at all and being Greeks off campus when it banned them until May 2025, by which point nobody at school at LSU when the incident happened will still be there.

How did LSU’s administrators think this was going to play out?

We can understand why neighbors like Huye are doing the “there goes the neighborhood” thing. But the real issue here is that fraternities are moving into neighborhoods near campus because LSU has been on the warpath in an effort to kill the Greek system for woke political reasons – and now, even worse than that, the university is continuing to hound them for the sin of reconstituting as a private club away from campus.

That’s very, very obnoxious. Chilling, in fact. And it shows just how badly out of control LSU’s woke administration is.

Interested in more news from Louisiana? We've got you covered! See More Louisiana News
Previous Article Most Recalls Are Hopeless Causes, But Is The LaToya Cantrell Effort Different?
Next Article JOHNSON: What I Learned By Objecting To “Little Demon”