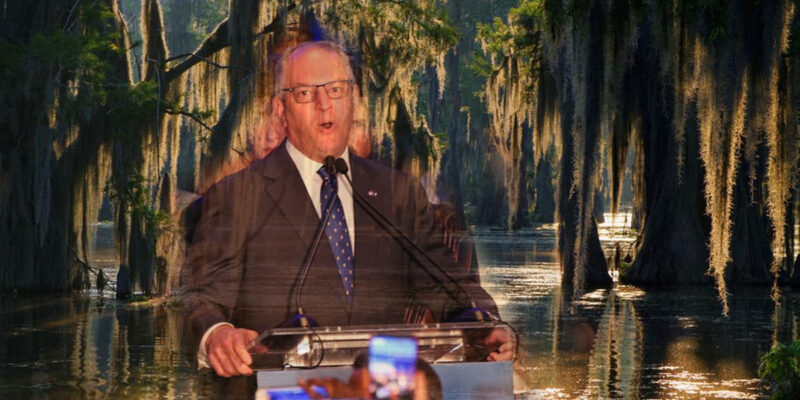 Louisiana has its own mystery. Like a typical Hollywood production, it needs a title so let’s call it the “Case of the Disappearing Governor.”

Almost at once from his re-election, the governor of Louisiana has quietly disappeared from the public eye. He was very visible during COVID, but beyond that and his re-emergence a couple of times during legislative sessions our leader has all but disappeared. To prove my point, just ask the average man or woman on the street what the governor has done or has proposed that might make better for them of their children?

What is the hottest issue in Louisiana, perhaps in the whole nation? Everyone knows that it is the explosion of crime, the decline of the criminal justice system, the crowning of New Orleans as the Murder Capital of the Nation. And yet what have we heard from our leader? Silence.

Perhaps this is because early in his tenure he led the way on his view of criminal justice reform and on the goal of releasing thousands of convicts, reform that seems to have been far too liberal and has paved the way to the crime epidemic. No one would want to lay claim to the results of acting on a backfiring woke version of La La Land. A leader committed to a safe and fair justice system would very publicly make clear the value in reform and at the same time promote adjustments in policies that have resulted in the primal fear that crime has instilled in our citizens and the damage to one of our major economic drivers.

There are those who say that he just doesn’t want to challenge the woke local politicians of his party, or perhaps he just doesn’t have a clue of what to do. Who knows, but his reaction to the crime explosion is burying his head in the sand as our cities explode. Silence from the most powerful leader in the state, silence from the one person who could use his authority to reign in state bureaucrats and local leaders who challenge state law and state policy. The one person who could reform his own the criminal justice reforms to react to the goal to create a safer society and not on perceived equity for criminals.

Who doesn’t remember his early campaign promise to ensure education success because he sleeps every night with a teacher. A great political metaphor, but actions speak louder than words. Instead of leading on the one path that could change Louisiana for the better he just deferred to the Education Establishment, the unions, School Boards, and superintendents, and so, except for a lot more spending, nothing has changed. His two terms have resulted in educational outcomes locked in at last or close to last in the nation. Silence is not golden.

And then there is the welfare of our people. With no protections for state taxpayers, the governor accepted Obamacare. I agree that had it been done properly it would have been an appropriate action. However, after many years of exponential spending increases, it doesn’t appear that it has resulted in anything other than the massive expansion of medical conglomerates and their executive salaries, linked to a swelling state bureaucracy. This is all driven by billions in recurring budget growth, growth that has been fertilized by unpredictable federal funds laced with myriads of attached strings. These are funds that will eventually dry up and sink the state’s fisc. My hunch is that if health outcomes were significantly better than before Obamacare, we would be hearing all about it. Instead, silence.

But even before that fiscal eventuality, the ticking time bomb that is the $21 billion Unfunded Accrued Liability in the pension funding will come due. The Governor has disappeared on that one, too.

Economic prosperity, infrastructure, strategy, higher education, reversing out migration, ending the cycle of poverty, nurturing rural areas, …. the list of desperately needed reform is long, the responses to them, a leader who is as they say, “a gone pecan.”

Well maybe my evaluation of our disappearing governor is not quite fair. As long as there continues to be massive injections of Federal funds there are plenty of ribbons to cut and bureaucracy to grow.

What has truly disappeared is the hope for a vision of a better Louisiana. In place of vision the strategy of the Administration has only ever been one of reaction. Reaction is leadership from the rear, not the front. The almost nonexistent advancements of the last two terms, and to be fair many terms proceeding them, prove that Louisiana’s people deserve something far more than a disappearing governor who believes in leadership from the rear. For us to become a progressive state, a state where prosperity and not bureaucracy is the goal, we need a leader who rejects that Louisiana can do no better, a leader who is out front every day shining the bright light of vision on the path to that prosperity.

The good news is that in a year our world could change. The mystery then will become do we finally get a visible, visionary leader, or do we continue in the insanity of repeating the same things over and over and expecting different outcomes. Perhaps the “Case of the Disappearing Governor” will be solved, or perhaps not!