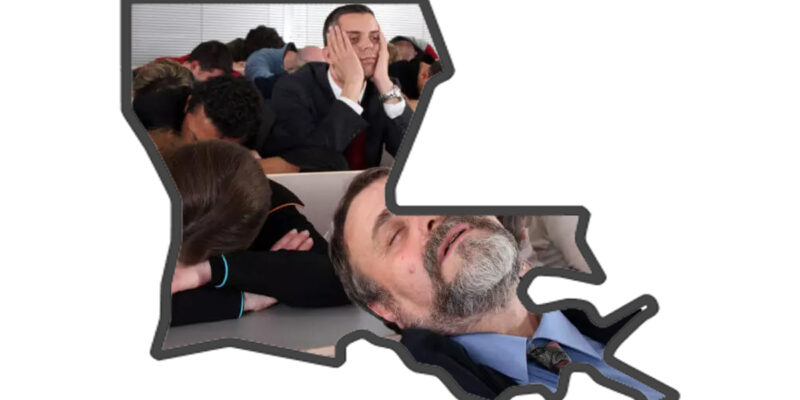 We only occasionally pay attention to the rankings in these WalletHub surveys of the states on various topics, because a lot of them are pretty boring and some others are just plain wrong. But the one that WalletHub put out today caught our eyes. It validates something we’ve noticed for some time.

Namely, that people in Louisiana are way less politically involved than we need to be if we’re going to get off the bottom of all the other rankings of the states.

We’ll start with the results of this survey…

The top 10 states are mostly places where a blue political machine controls and generates massive turnout, or they’re close to Washington, DC, or there’s a cultural reason for high political engagement (Iowa, for example). WalletHub used 10 criteria to establish a score for each state, and we’re not completely convinced these are valid…

For example, “Voter Accessibility Policies” making it easier to harvest ballots doesn’t exactly correlate to an engaged and informed electorate. Neither does “Preregistration for Young Voters Policies.” The premise of this study seems to be that the more voters turn out in an election the better the electorate is, and that premise is faulty as hell – beyond a certain point you’re going to have people voting who don’t even know their own state capital and can’t name the three branches of government, and that isn’t a better electorate than one with 10 or 20 percent less turnout but the voters know what they’re voting on.

WalletHub dings red states for scoring worse in this survey than blue states, particularly since there’s a pattern of young people in red states not voting. But if the youth aren’t engaged and informed, then what value do they offer in showing up to the polls?

So in large measure this is a junk study, but nevertheless, among Louisiana’s rankings…

Turnout was down in Louisiana for 2020 because Joe Biden was a horrendous candidate who never set foot in the state to campaign and the Dems had an absolutely abysmal Senate candidate in Adrian Perkins (not that the incumbent Republican Bill Cassidy isn’t abysmal, but the full extent of Cassidy’s awfulness didn’t set in until after the election). Only in the 5th congressional district was there a competitive congressional race, and unlike most states Louisiana’s statewide election cycle doesn’t coincide with federal elections. So there are reasons why our 2020 turnout would unfairly mark us as having low political engagement.

But we do have low political engagement, based on things the study doesn’t capture.

We have a devil of a time getting people to run for office in Louisiana. A perfect example: LaToya Cantrell has been laying waste to New Orleans for five years now, and yet last year nobody of any political stature was willing to run against her. None of our congressional races are ever competitive unless a seat is open; taking down an incumbent is almost impossible in those. We can’t remember the last time an incumbent congressman lost. And Cassidy beating Mary Landrieu in 2014 was the first time an incumbent senator had lost re-election in practically forever.

Civic engagement efforts like city incorporations and recalls happen a little bit in other states; practically never here. The St. George incorporation was, of course, a success story, at least in terms of generating a successful petition (perhaps twice, if you believe the accusations of dirty pool by the East Baton Rouge registrar’s office) and a winning election. But of course there still isn’t a St. George because of the terrible work of the judicial system that might be remedied at the appellate level.

And there has never been a successful recall effort against a major politician in Louisiana.

What’s more, the political contributions category, where Louisiana ranks 34th, is artificially inflated. There’s a small group of donors who do all of the heavy lifting in that arena; ordinary, non-rich Louisianans are the least politically generous folks anywhere. It’s so rare that a politician in Louisiana will rack up on a bunch of small $20 or $50 donations that most candidates don’t even bother to try. They make the circuit of the PAC’s and the big-money, max-out donors and they call it a day, and as a result if you want to run for office one of the first things you have to do is lock in one of the half-dozen or so professional fundraisers in the state who have all the big donors in their rolodexes. Without one of them on your team, you might barely raise enough money to get elected to a parish council or the state House of Representatives, but anything beyond that? Forget it.

People here might follow politics, and they’ll definitely follow national politics. Almost nothing at the local or state level gets people torqued up anymore. For example, John Bel Edwards spent the better part of two years trying to lock down Louisiana’s civil life and even forcing a useless COVID vaccine into the arms of kids, and most of the state basically yawned. Now – nobody complied with his mandates, other than a few people in core Democrat constituencies, but to get angry about it and demand somebody do something? Nah.

In most other red states, Edwards would be hounded out of office for his job performance, or at least the voters would be pushing their state legislatures to override and neuter him. He would never have gotten elected in a Tennessee or Alabama, and he wouldn’t have been re-elected anywhere in the south. He was here, because people just accepted his brand of malaise and cowardice.

Here’s why, and interestingly enough it might actually be Bobby Jindal’s fault we’re where we are.

People in Louisiana overwhelmingly were born and raised here. It’s just under 80 percent of the population of the state who are natives. That’s actually a pretty cool thing, in that it breeds a lot of cultural adhesion and it makes things like Mardi Gras, LSU football, the Ponchatoula Strawberry Festival and so on the grand tradition they are. People from out of state come here and they can’t believe how big a deal some of our cultural fare can be. There’s a lot of charm in that.

But the downside is there isn’t all that much room for innovation, and folks in Louisiana haven’t been around as much to see how things work in other states.

So if you don’t know that Texas has a better tax structure because you haven’t lived there, or that Florida has a better-built health care system, or that Tennessee’s business climate is better because of policies they’re set up, you might just think “Oh, well,” when Louisiana is abjectly failing on those scores.

Jindal was the first and only modern Louisiana governor to come along with a binder full of policy fixes cooked up in DC think tanks and elsewhere, and following the disastrous Kathleen Blanco administration and the state’s clobbering by Hurricane Katrina, people were willing to take a chance on the smart kid with the Ivy League degree and all the things he was willing to do.

Jindal actually did bring some innovation to the state, but he didn’t have a legislature willing to completely overhaul its structure. So those little innovations made little real difference in the lives of the average Louisianan. The state’s economy did improve for most of Jindal’s tenure in office, but then the bottom fell out of the oil market and when he left office we were in a recession.

And Jindal didn’t add the political piece to the policy piece. He didn’t build public support for his program, for two reasons. First, he never had to. Nobody of any note ran against Jindal in either 2007 or 2011. And second, Jindal spent his entire time in office feuding with David Vitter over who was the lead dog in the Louisiana Republican Party, so he missed out on his chance to embed a new political culture to replace the broken-down Huey Long/Edwin Edwards commie populism that crushed this state in the first place.

Instead of taking on that project, he started grooming himself to try to run for president, and at that point the average Louisianan concluded that public policy is little more than bullshit campaign promises politicians make, and nothing will ever change.

And if nothing will ever change, why bother getting engaged?

Edwards’ two elections were more about hopelessness than anything else. If Republicans couldn’t fix Louisiana, then just get a Democrat who says he’s pro-life and won’t come after our guns.

WalletHub’s methodology might not be very good, but they’ve nevertheless captured something true. Louisiana is a state with low political engagement. And that will only change when the people see some evidence that politics is more than just a quadrennial grift laid on them by hucksters and crooks who’ll never make things better.

Interested in more national news? We've got you covered! See More National News
Previous Article MONCLA: In Defense Of Carbon Capture
Next Article SADOW: Perkins Is Either Stupid Or Doing A Good Job Of Acting The Part