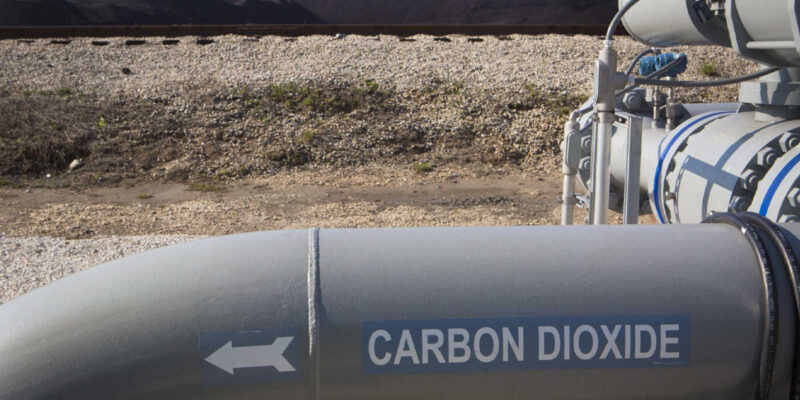 There’s been a good deal of griping, and you’ve seen that manifesting itself here at the site, as we’ve had several posts back and forth about this new explosion of activity in the area of carbon capture, about a change we’re seeing within the oil and gas industry. Specifically, oil refineries and other facilities in the downstream oil and gas sector are embracing “green” initiatives.

The carbon capture boom is part of that. Essentially, this is about taking the carbon dioxide that chemical plants and oil refineries would normally emit into the air and pumping it through pipelines to underground storage.

And here’s what you don’t know about all of that. Because there are essentially three ways to dispose of CO2. You let it out into the atmosphere, where it becomes a trace gas of a slightly greater concentration, and the climate nuts say it’ll cause global warming. You can pump it into the ocean (or Gulf of Mexico), and it’ll dissolve and get soaked up pretty quickly. That, as we understand it, is what the carbon capture plan is in Texas.

Or you can do what they want to do here in Louisiana, which is to pump it into injection wells a few thousand miles underground, where it’s going to mix with water to make a whole lot of carbonic acid which is toxic and corrosive and nobody has a clue what’s going to happen as a result.

If that seems pointless and stupid to you, you’re not unreasonable, which is why in a number of jurisdictions around the state folks have risen up and gotten parish councils and so forth to block the carbon-capture pipelines. That’s generated a good deal of anger from the folks in oil and gas, who are essentially saying that without these otherwise pointless additions to their infrastructure, they’re going to get put out of business by the leftist climate nuts who populate all the federal – and thanks to John Bel Edwards, increasingly, state – bureaucrats and regulators who are trying to create a pointless and harmful Carbon Zero future.

Which, of course, China and India are not trying to do. So this is worse than stupid.

But the thing is, Louisiana isn’t in control of this. Even by doing things like divesting from the ESG fascists like Blackrock, our state is still not in a position to make the decisions about what the oil and gas industry will look like in five or 10 years.

That’s the message Tommy Faucheux, the president of the Louisiana Mid-Continent Oil and Gas Association (LMOGA), offered in a speech in the Houma area earlier this week.

Global demand is pushing toward cleaner energy, and Louisiana must follow, an oil industry leader said Tuesday in Houma.

Faucheux spoke to members of the South Central Industrial Association during a luncheon at the Cypress Columns meeting hall in Gray.

Political and market trends are pushing the oil and gas industry toward cleaner output, and government regulations are making it harder to operate, he said.

“If you look from a market standpoint, the market wants companies to be lower carbon,” he said. “I know it is hard for some people to embrace a lower carbon energy future for any number of reasons. Be open to it because it is a new wave of industrial investment in Louisiana that I believe in. It will definitely bring increased revenues and jobs while at the same time allowing us to expand oil and gas production.”

Oil companies are cutting carbon emissions wherever they can because consumers are demanding it, Faucheux said. Much of this is done through carbon capture, where companies collect carbon byproducts and waste during the production process and store them underground.

What we’ve heard a whole bunch of people object to in Faucheux’s statements is where he says consumers are demanding lower carbon emissions. The objection goes that no consumers give a damn about that, they want affordable petroleum products like gasoline and plastics and fertilizer. We’d love to say that most people recognize that carbon dioxide is plant food, but we’re not sure that’s true after 30 years of propaganda calling it a poison, but in any event we’d say it’s mostly BS that consumers care about CO2 emissions.

They don’t want legitimate poison coming out of smokestacks at oil refineries and chemical plants or car exhausts, and lots of them don’t really know what comes out of those smokestacks. If they knew it was pretty much the same stuff that comes out of your mouth and nose when you breathe, they wouldn’t give a damn.

But Faucheux isn’t really talking about the average consumer, and if there’s a disconnect he might be able to resolve it with some clearer language.

The market these oil companies are trying to satisfy is Woke Finance, which has completely bought into ESG fascism and is busy denying the oil industry capital, “for the planet.” That, and probably some of the other moron consumers of petrochemical industry products like, for example, the crunchy wokers at The North Face and Patagonia who posture as environmentalists despite making practically all of their products out of polyester that emanated from a petrochemical plant somewhere. To salve their guilt and hypocrisy they might be demanding all this carbon capture stuff.

This creates a real conundrum for folks in Louisiana who have taken the position that they want to defend the oil and gas industry, which means the Hard Left, and particularly the climate nuts on the Hard Left, are laughing like hyenas about it.

Because the carbon capture stuff they’re pushing is all funded by corporate welfare emanating from the federal government while at the same time being required as part of the Green New Deal agenda the Democrats have forced through Congress – when they haven’t been trying to jam it down the industry’s throats with regulation.

So these companies are all trying to attach themselves to the federal sugar tit with the carbon capture stuff. Because regardless of Faucheux says, this isn’t a profitmaking proposition. The only way it makes money is that Uncle Sugar is paying for it.

And that’s an ugly sight. But you can’t really blame them. They’re in a business the feds are trying to get rid of. And none – or very few – of these companies are based in Louisiana. We haven’t had a business, regulatory or tax environment commensurate with a home-grown petrochem industry for a very long time. These are all multinationals for whom ESG and the globalist climate-nut agenda is a harsh reality they’ve resigned themselves to.

So if you tell them no, you’re going to ultimately induce them to downsize and then abandon their Louisiana facilities.

We actually don’t have a position on this yet. We haven’t figured out our out-of-the-box solution to deprogram Louisiana’s oil and gas sector from this wasteful idiocy. We’re generally with the people who’ve objected to Faucheux’s warnings, but we understand where he’s coming from as well.

The only real answer, which doesn’t really involve Louisiana since the voters here are already going to max out everything we can do at the federal level in a week and a half, is to chase the Democrats out of political power and then demand the new Republican majorities on Capitol Hill get aggressive to put an end to ESG and climate nuttery in public policy. That has to be done nationally. We can’t do much about it here.

And then next year, make sure we elect a governor who’s the precise opposite of John Bel Edwards – as the latter has forced this stuff into state policy for the purposes of feathering his own nest after he leaves office. Maybe once that’s done Louisiana can team up with Texas, Oklahoma and a host of other oil and gas states to get some leverage together and deflate this climate-nut idiocy from the supply side.

This stuff has been a long time coming and this controversy is what you get as a result of those sins. There is no good answer anymore. We’ll either have pipelines pointlessly moving carbon dioxide all over the state, or we’ll have not much of an oil and gas or petrochemical industry left.

Interested in more news from Louisiana? We've got you covered! See More Louisiana News
Previous Article SADOW: Bad News, But Not The Worst News, For Louisiana’s Democrats
Next Article RIALS: The Debacle That Was The East Baton Rouge Stormwater Fee