What we’ve seen across the country, and it feels like it’s worse now than it’s ever been, is that there is simply nothing true about American politics anymore. Particularly with respect to the Democrat Party.

Newt Gingrich characterized the American Left has having gone crazy, and he’s not wrong. Except from this vantage, it isn’t madness which is driving the hard break from reality we’re seeing from Team Biden and their allies; it’s something more sinister than that.

They’re so used to controlling the national narrative and they’re so full of themselves after the 2020 presidential election and the events which followed that they believe there are no limits to cultural aggression, political attack or outright economic repression that they might choose to perpetrate.

But it’s beginning to sink in that their assumptions – that history has been bent in an inevitable arc toward their direction, and that it’s all going to fall into place from there – don’t really work. And they aren’t handling it well.

They never handle anything well, which is one reason the Left has so much trouble consolidating power over the long haul. But this election cycle is worse than ever.

So what you get is a contempt for the American people who have demonstrated for well more than a year that we simply don’t accept this globalist, climate-nut, Branch COVIDian, race-hustling, trans-advocating, economic illiterate style of governance which insults the nation’s traditional values and lowers our standard of living in measurable, noticeable ways. Team Biden has had months to adjust their policy approaches with respect to things like domestic energy production, for example, and has chosen not to.

And in a week they’re going to pay a stiff price for it. By the time the new Congress is sworn in next January, the Democrats will have lost majorities in both the House and Senate and there will be a rather significant spread to boot. They could lose, in Gingrich’s estimation, between three and seven Senate seats and between 20 and 50 House seats, which would result in the GOP’s largest congressional majorities since 1920.

Should that happen, the 2022 midterms will serve as a harbinger of an entirely new political era, a Post-New Deal/Great Society America in which no assumptions about our national politics remain valid and the Overton Window will shift and settle in a different place, meaning that policy solutions and institutional directions not previously thought possible might well become mainstream.

More on all of that in another post, or several. But what’s clear today is how far the Democrats are willing to go in order to blunt the ugly reality staring them in the face with Nov. 8 approaching.

Quite far, as it turns out. For example, there was Joe Biden telling an out-and-out lie that gasoline was $5 per gallon when he took office. It was $2.39 per gallon on average. There was Biden claiming the economy is “strong as hell” after two straight quarters of GDP shrinking, and very suspect growth numbers for the 3rd quarter which came out a few days later – 2.6 percent growth, but driven by an increase in government spending and a shrinking of net imports, mostly due to American natural gas being shipped to Europe to replace Russian supply lost to the Ukraine war. No one believes we’re going to escape an extreme recession next year; not with diesel fuel reserves, for example, shrinking to just a three-week supply.

There’s Karine Jean-Pierre taking to the Sunday shows to accuse Republicans of “trying to take away our Social Security,” a bit of demagoguery which is a classic Democrat response to electoral trouble. There’s Stacey Abrams denying a fetal heartbeat is real.

And then there’s the attempt at political monetization of the assault by a mentally ill registered Green Party member, gay nudist and hippie commune denizen on Nancy Pelosi’s husband following a somewhat (to be kind) suspicious break-in. Biden and practically every other Democrat rushed to claim that the attacker is a MAGA assassin despite zero evidence to back such a claim, and the Democrats’ friends in the legacy media have done everything they could to label people expressing doubt about their manufactured narrative covering the attack as liars and disinformationists.

Not to mention the serial accusations made about Herschel Walker, who has now taken a firm, if slim, lead in the Georgia Senate race. Those attacks lack credibility; when the most recent one is shepherded into the public eye by the notorious sleazeball lawyer Gloria Allred, it’s obvious what’s going on here.

Across the country, everywhere Democrats are threatened with electoral losses the lies are mounting up.

Interestingly, even in Louisiana we’ve seen fairly brazen collusion between dishonest Democrat politicians and the usual suspects in the media.

For example, there was the strange pro-abortion ad which went viral courtesy of long-shot Democrat congressional candidate Katie Darling. The ad depicts a pregnant Darling going into a hospital and preparing to deliver a baby. It was creepy enough that a political candidate would so shamelessly advertise her childbirth, but to do so in an ad touting her desired freedom to kill the child in question without governmental limits on the killing was more than a lot of people could bear.

You saw the ad. But watch it again closely, because it’s even worse than you think.

Louisiana ranks 50th in crime, 48th in education, and 46th in health care. I’m running for Congress to stop this race to the bottom because our children deserve better. pic.twitter.com/EenFUpn4ed 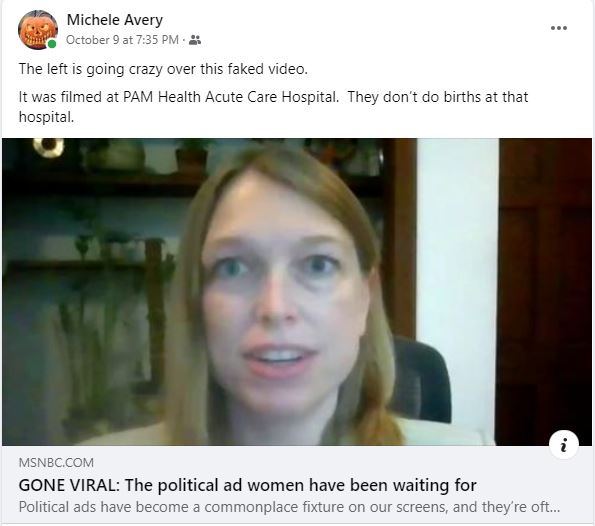 Yep. That’s true. Check out this frame from the ad… 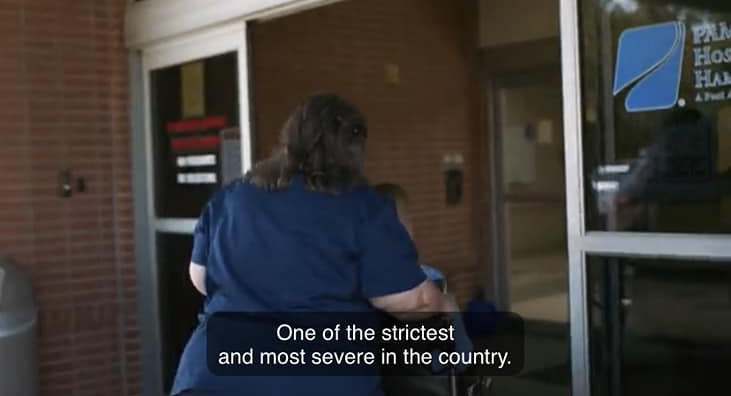 That logo on the right? Here it is again… 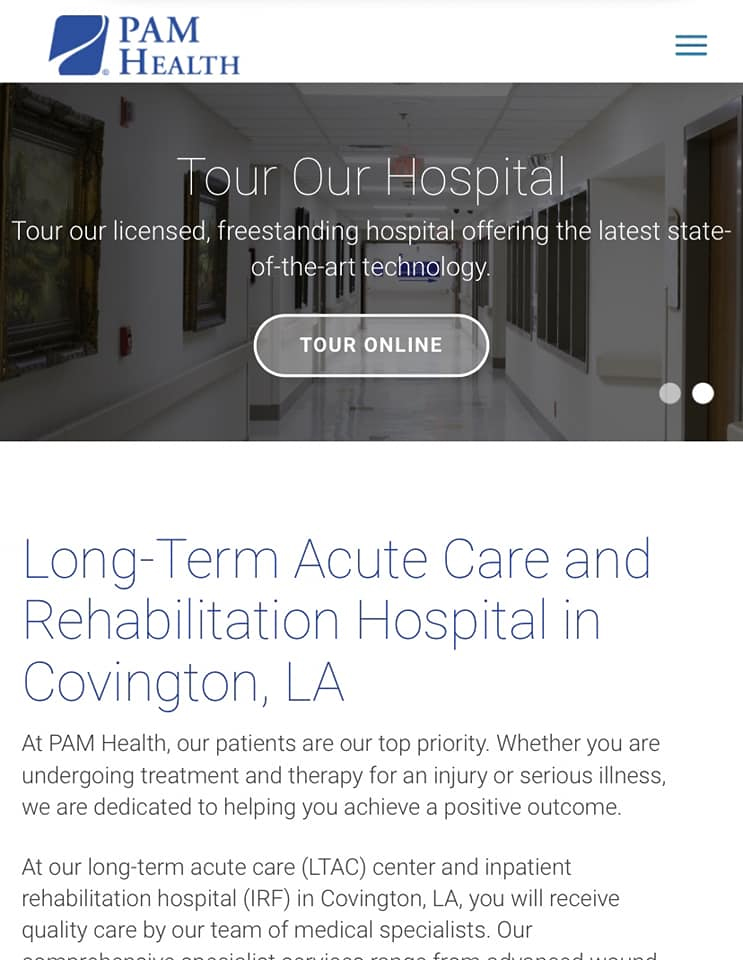 Feel free to look up the services provided at PAM Health. Ob-gyn or childbirth aren’t included.

Everything about the ad is a lie. Save, we hope, for the actual delivery of Katie Darling’s son – which isn’t actually happening in the ad as it portrays. She’s just playing herself in the film adaptation.

Is it a big thing? No. Katie Darling’s whole campaign is not a big thing. But the left-wing media jumped all over that dishonest ad and called it every salutary name they could.

Because the left-wing media is brutally dishonest. And in Louisiana that’s inescapably true, as another example makes clear.

Yes, this comes back to The Advocate, a partisan Democrat publication which unfortunately dominates the newspaper trade in the state. The Advocate’s staff consistently slants pieces in a dishonest way, which is one reason why its market position has cratered along with its credibility with most potential readers in the New Orleans, Baton Rouge and Lafayette markets in which it operates and it now depends on subsidies from left-wing nonprofit foundations to sustain its viability.

And those nonprofits have turned the Advocate from a purported objective news source to a Democrat propaganda organ. Two articles written earlier in October attempted to trash Katie Darling’s opponent, House Minority Whip Steve Scalise, as some sort of January 6 enabler or ally. For example, here was the laughable Stephanie Grace…

After U.S. Rep. Jim Banks, of Indiana, asked whether Pelosi was ‘involved in the decision to delay National Guard assistance on Jan. 6,’ Scalise suggested his colleague must be on to something.

“Jim Banks just raised some very serious questions that should be answered by the Jan. 6 commission. But they’re not, and they’re not for a very specific reason, and that’s because Nancy Pelosi does not want those questions to be answered,” he said.

So, you know who seems to have known the answers all along?

Not to be outdone, The Advocate’s Mark Ballard said Scalise was “under fire” for supposedly lying about what he knew about security on January 6…

At the June news conference — which critics played along with the Jan. 6 video — the Republican congressmen preceding Scalise weren’t as nuanced in their criticism of Pelosi. They said she delayed calling in the National Guard.

Scalise then took the mic and said the previous speakers had “raised some very serious questions that should be answered by the Jan. 6 commission, but they’re not, and they’re not for a very specific reason, and that’s because Nancy Pelosi doesn’t want those questions to be answered.”

The “fire” Scalise was under came from a segment on MSNBC’s Morning Joe, a partisan Democrat show Ballard labeled otherwise because its host Joe Scarborough was once a Republican congressman – as if anybody believes that past confers objective legitimacy on the parade of hackery which appears in that time slot.

But this is all a ridiculous nothingburger, and the fact that it’s being dredged back up in October from a press conference in June smacks of partisan oppo research.

Where are National Guard troops going to come from on a dime? They have to be mobilized and deployed in order to be in place somewhere. That means well before January 6, 2021 if they’re going to be on hand January 6, 2021.

And what Scalise was asking was that should the Democrats’ January 6 Commission want to conduct a real investigation of the events of that day, they ought to look into why National Guardsmen weren’t laid on well in advance of that day – and we all know they weren’t laid on because Pelosi chose not to lay them on.

Here were Rep. Jim Banks’ questions at that June press conference that Scalise agreed were valid. Ask yourself if you’ve seen anything – even now, four months later – that provides an answer for any of them…

And here are the questions that you should be demanding answers from the Select Committee members as well: First of all, how is it possible that the Capitol Police we now know was half staffed because of COVID on January 6? Second, why were our officers under equipped on that day? Why were some officers forced to face down a riot without helmets or expired equipment? Why were the Capitol Police officers never trained to handle a riot even after all of the riots that were ongoing in Washington, DC, in our nation’s capital, in the Summer of 2020? Did Speaker Pelosi communicate with the House Sergeant-at-Arms on January 6 or in the days leading up to the riot? Why didn’t the Capitol Police’s intelligence unit raise the alarm about potential violence when they had intelligence going back weeks before January 6th that told them that something was going to happen? Why did the FBI deploy commandos to Quantico on January 3 with shoot to kill authority but fail to send the United States Capitol Police a single threat assessment or intelligence bulletin? Was Speaker Pelosi involved in the decision to delay national guard assistance on January 6?

Lies, gaslighting and partisan dishonesty on the part not just of virtually every Democrat politician in sight but their lapdogs in the legacy media. We’re awash in it. It’s irritating beyond belief and it’s going to contribute to the ugly shellacking that party will suffer next week.

One hopes that a significant change coming as a result of the earthquake the 2022 elections might offer will be the breakup of these lies as a systematic political strategy. America is sick and tired of them, and Louisianans are no exception.