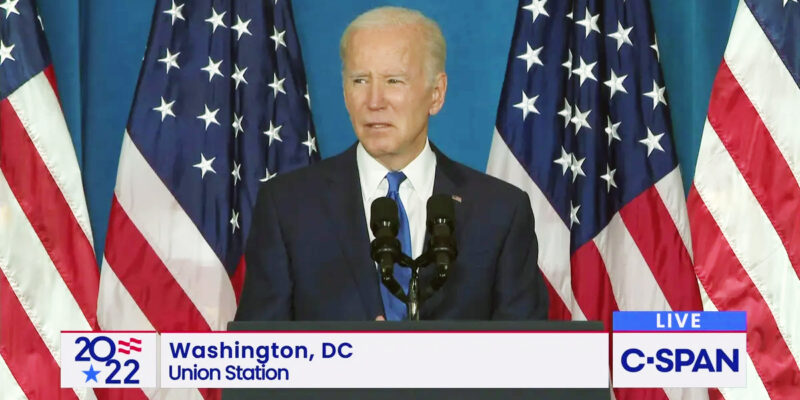 No president in modern history has failed as a leader to the degree that Joe Biden has.

Perhaps it’s partly the fault of his background where he spent almost four decades as a US Senator, a body that is suited more for speechifying within its echo chamber than engaging with the public.

Or, simply, the man is not and never was cut out to be president. That necessitated a Rube Goldberg device’s chain of circumstances to facilitate his unlikely path to the Oval Office.

Regardless of your measure of the integrity of the previous presidential election, nobody could credibly discount the irregular nature of its conduct or claim it was essentially no different than the previous six.

And then there’s his mental acuity – or deficiency of same – that conveys neither confidence nor strength…or on bad days basic competency.

And then there’s another aspect of Biden’s advanced age. While every one of his predecessors were concerned with their legacy, including a dying FDR, who established the presidential library system, Biden conducts himself completely unconcerned with his own.

While many folks might consider a president obsessing about his legacy a base egotistical act, it can serve as a check on an executive’s lesser angels.

A particular action may reap short-term dividends yet age terribly in the history books.

John Adams, our nation’s second president and, in terms of contributions, a Founding Father peer on the level of Washington, Franklin, Jefferson, and Hamilton, had his place in the pantheon of heroes diminished not just for having lost reelection but his signing of the distasteful Alien and Sedition Acts.

Biden is truly “presidenting” for the moment and he is living his reward in the present.

Or put another way, Biden is governing paycheck to paycheck figuring some other sucker will have to clean up his mess, even if that individual is a member of his own party.

Just look what’s he doing with the strategic petroleum reserve to mildly deflate gas prices just before the mid-terms.

And that is what makes Biden truly the worst amongst American presidents. And why he says so many ridiculous and divisive things in the most odious manner.

Americans who bothered to pay attention were treated on Wednesday night to the latest episode in the recurring series of un-presidential Biden rants.

With his approval rating upside down, an amazingly large share of the country attesting that we are heading on the wrong track- a margin so large it must consist of plenty members of his own party, inflation and gas prices through the roof, Ukraine up in flames, and crime rampant in cities under the soft-prosecutorial hands of his fellow traveler district attorneys, the Democratic cupboard is bare of meaningful results for the average American.

Having given up on running on his record, Biden was compelled to frame the midterms as being about the future of democracy in America as this imagined bogeyman of approaching fascism is relatively more believable than calling his past two years a success.

And  following up that September address with the disturbing lighting and flanked by Marines, Biden once again vilified Trump supporters while preposterously signaling that the likes of Liz Cheney, Lisa Murkowski, and Mitt Romney represent the real Republican Party.

For twenty minutes Biden caterwauled about the endangered democratic system as if he were trying to convince himself more than anyone watching.

Biden’s speech was repetitive, boring, absurd, contradictory, and desperate.  Though not as painful to watch as John Fetterman in his disastrous debate performance, Biden’s speech was equally sad in the realization that this is what is ostensibly running the country.

And like seemingly every speech that leaves Biden’s mouth, it was completely disingenuous.

By not saying that, Biden said a lot about his altruism or lack thereof.

As he concluded his screed, Biden said something that should concern everyone who truly believes in the sanctity of democracy with his comment that people need to be patient with a drawn-out vote count.

Funny how at a time where technology has increased the speed of everything in life the simple task of accurately and efficiently tallying ballots had slowed to a crawl.

Was Biden trying to further normalize delays in results or seeking to depress those Mega MAGA voters that have become the enemy of the state or both?

Speeches like Biden’s do more to undermine the public’s confidence in the democratic system and the country as a whole by sowing the seeds of paranoia and distrust.

Interested in more national news? We've got you covered! See More National News
Previous Article BAYHAM: The Vichy GOP And Their Attempt To Save Pelosi And Schumer
Next Article SADOW: Blanket/Jungle Primary System Is Terrible For Louisiana’s Parties