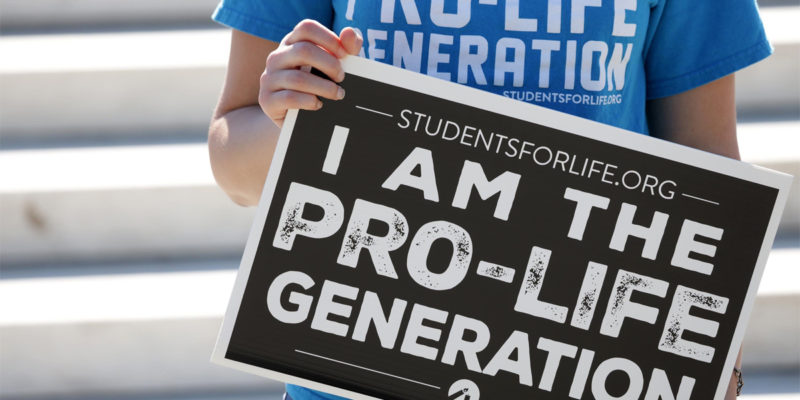 The Jubilee Year came a year early for the unborn in the States (see Leviticus 25).  After almost 50 years of legalized slaughter, the federal Supreme Court reversed its horrible Roe v Wade decision in 2022.  Having achieved this momentous goal with God’s help, pro-life activists must now change their focus but not lose their zeal.

They must not lose their zeal, for the pro-death faction is finding new ways to murder the unborn, whether mobile abortion clinics, or mail-order abortion-inducing drugs, etc.  Despite abortion bans of various strictness going into effect in several States, we are forced to agree with Mr Bradley Devlin when he wrote, ‘ . . . abortion on an industrial scale continues apace across the country.’

Continued zeal is therefore necessary, but where to direct it?  Marching, rallying, etc., each January will be akin to whipping a dead horse now that Roe has been overturned.  The horrors of that ruling should be remembered each year, much like the horrors of communism are now being remembered on 7 November.  But this is the negative side of the task, the reminder of what we must not do anymore.

There must be a positive side as well.  And we will find part of that in moving the focus of pro-lifers from January 22nd to March 25th, the Feast of the Annunciation.  This Feast of the Church celebrates the visit of the Archangel Gabriel to the Virgin Mary in which he announces to her that she has been chosen to be the Mother of our Lord, God, and Savior Jesus Christ.  When she humbly gives her ascent to God’s will, then she conceives the Lord Jesus Christ in her holy womb through the overshadowing of the Holy Ghost (all of which is recounted in St Luke’s Gospel 1:26-38).  A compendium of information about this Feast Day is available here.

The significance for defenders of the unborn is not difficult to see:  In celebrating the conception of the Lord Jesus on Annunciation Day, we proclaim in a compelling and unique way that all human life begins at conception.  This is largely why March 25th should be the new focal point of pro-life advocates.

Beginning today, they should ask State legislators and governors with great urgency to make the Annunciation a holiday of the same prominence as Christmas and Easter.  In the economy of man’s salvation, it is certainly just as significant.  One of the hymns for the Feast words it this way:

‘Today is the beginning of our salvation, / the revelation of the eternal mystery! / The Son of God becomes the Son of the Virgin / as Gabriel announces the coming of Grace. / Together with him let us cry to the Theotokos: / Hail, O Full of Grace, / the Lord is with You!’

In its antiquity, it is one of the oldest Feasts celebrated by the Church.  The earliest surviving image depicting the event is from the 2nd century in one of the Roman catacombs; a sermon on the Feast by St Gregory the Wonderworker of Neocaesarea dates from the 3rd century.

Making a holiday of the Annunciation would promote two interrelated goals:  advancing a pro-life culture and strengthening a Christian ethos in society.  The Church has been on the decline recently because of the cultural power that we have allowed certain elites who oppose Christianity to accumulate in corporations, courts, schools, media, and so forth (though internal corruption has contributed in no small measure to the decline).  Christians can no longer adopt a relaxed attitude toward this.  They must find ways to fight against and weaken un-Christian forces in society.  Government action is not the ultimate solution for the Church’s woes, but it can help (as Rod Dreher has said).  Adding a new Christian holiday to our calendars would certainly be beneficial; it would put at the center of everyone’s attention on that day a momentous event in Church history, in world history.

At the same time, as we said above, it draws attention in a powerful way to the truth that life begins at conception.  Thus, two good goals achieved by establishing one new holiday (it would also go a long way in exalting chastity and motherhood).

Happily, in this endeavor we would not be building entirely from scratch.  Celebrating the Annunciation as a pro-life holiday has been an ongoing endeavor for decades.  The organization Priests for Life gives details:

The celebration of March 25 as the Day of the Unborn Child was first recognized in El Salvador in 1993 and has grown rapidly. In 2003, the first Provida International Congress in Madrid with representation from over 20 countries in Europe and the Americas institutionalized March 25th as International Day of Life. Since then, the day has grown in popularity, in some places recognized as the Day of the Conceived Child. This year, the Day of the Unborn Child is recognized in Argentina, Guatemala, Chile, Costa Rica, Nicaragua, Venezuela, Dominican Republic, Uruguay, Panama, Peru, Slovakia, Cuba, Austria, Philippines, Romania and more.

Celebrations included Spain marking the day with over 200 civil associations participating in a march to defend life and 42 different localities throughout the country held demonstrations supporting the march with the theme “Say yes to life”.

Slovakia marked the Day of the Conceived Child with a week-long campaign featuring media and television outreach supported by a coalition of NGOs associated with the Forum for Life, with the message, “Life is beautiful. Protect it from conception”. The campaign also includes billboards, leaflet distribution, a white ribbon show of solidarity and a screening of the movie Bella.

Romania, which has the highest abortion rate in the European Union and the second highest in Europe, had a large March For Life with three simultaneous marches in the cities of Bucharest, Timisoara and Satu Mare to “Say yes to life”. The march was organized by a joint action of over 20 pro-vita and pro-family NGOs and religious groups.

Peru had an early celebration on March 19 when 40,000 people come out to march for life in celebration of the Day of the Unborn Child. At a mass Archbishop Jose Antonio Eguren of Piura urged Peruvians to “be committed to building a culture of life, which must begin with heeding the voice of every unborn child.”

Thousands of all ages throughout Romania and the Republic of Moldova took the streets on Saturday, March 25 to march in favor of life and against abortion. This year’s “Help the Mother and Child! They Depend on You” program was the seventh annual Romanian national March for Life.

Participants marched through the streets of more than 138 cities, carrying banners and the Romanian national flag, as the Basilica News Agency reports.

According to Romania’s “Students for Life” association, more than 110,000 young people, families with children, and elderly persons, including hierarchs and clergy marched throughout the nation, singing and chanting slogans in support of life and families. In Bucharest, the demonstration concluded with a concert entitled “Live for Life” in Youth park.

The events do not have a single organizer nationwide, but rely instead on independent organizers who represent different local pro-life organizations and institutions. In some of the 138 cities, the march was held on March 24 or 26.

For the first time in the history of this movement, the March for Life 2017 in Bucharest was streamed live on Facebook by Prodocens Media and Trinitas TV.

The marches were not an official action of the Romanian Orthodox Church, but were blessed by the Church’s Holy Synod.

The March for Life 2017 was the crowning piece in a series of pro-life events entitled Pro-Life Month 2017, with the theme “Help the Mother and Child! They Depend on You.” The month of events provided the opportunity to debate the necessity, possibility and efficiency of supporting women in pregnancy crisis.

The most important solutions proposed, among others, in order to support women in pregnancy crisis are establishing counseling agencies specializing in pregnancy crisis and granting a pregnancy allowance starting from the fourteenth week of pregnancy (which represents the legal limit for getting an abortion on demand in Romania).

The marches coincided with the new calendar celebration of the great feast of the Annunciation, when the Lord Jesus Christ was conceived in the womb of the Most-Holy Theotokos by the overshadowing of the Holy Spirit. Of course, the Church understands that Christ was alive as man in her womb immediately. Furthermore, we see in the Gospel passage and icons of the meeting between the Theotokos and St. Elizabeth that St. John the Baptist and the Lord recognized one another while yet in the womb.

In Red Southern States like Louisiana, the time has come for us to mobilize our thousands for the celebration of Annunciation Day, to join El Salvador, Romania, and the other countries listed above in making March 25th a new pro-life holiday.

It is important to note at this point that this is not a narrow, sectarian project; it is supported by a wide array of groups and individuals, a listing of which is included at the end of this page.

The actions of all unborn defenders on this day, while they can take many forms as indicated above, should be on three things at a minimum:

-Celebrate the Annunciation in a Christian way, at a church or at home, with liturgies, hymns, and so forth.

-Donate resources to organizations that help pregnant mothers (crisis pregnancy centers and so forth) as well as groups that help dissuade women from abortion.

In Louisiana, with substantial Republican majorities in the Legislature along with pro-life Democrats, a (supposedly) pro-life Democrat governor, and influential pro-life organizations and churches, a bill establishing an Annunciation holiday should be one of the easiest laws to enact in the next session of the Louisiana Legislature.  There are other anti-death/anti-abortion measures that also need attention (like the out-of-State abortion pills), but a pro-life, Christian holiday ought to be at the center of those discussions, beginning today and continuing on up to April of 2023.

This is all part of what folks call the culture war, but it is really a religious war.  The pro-abortion zealots have a particular religious outlook that is decidedly antihuman, posthuman, transhuman, or some variant of those.  Conservatives/Traditionalists/Revivalists are going to lose this war if all they offer is libertarian, indifferent, moral relativism (i.e., religious freedom/neutrality).  They must counter with an opposing worldview, with the Christian worldview, one full of hope, love, real community, and other inspiring, uplifting virtues, into which an Annunciation holiday fits quite nicely.  Absent such culture-shaping initiatives, pro-life advocates may well continue to suffer more unexpected post-Roe losses like those in the Red States of Kentucky and Montana on Nov. 8th.