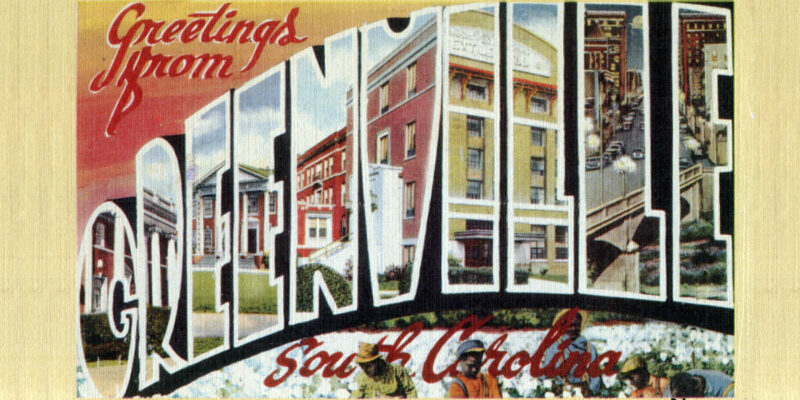 “Facts are stubborn things; and whatever may be our wishes, our inclinations, or the dictates of our passions, they cannot alter the state of facts and evidence.” ~ John Adams

Mayor Broome and Baton Rouge Area Chamber (BRAC) are trying to snooker you with their latest canvas trip to Greenville, South Carolina. I extracted these paragraphs from the November 4th, 2022 article in The Advocate (Baton Rouge):

The more than 100 business, political and community leaders who participated in the Baton Rouge Area Chambers’s canvas trip to Greenville, South Carolina, came away with the goals of improving downtown, getting LSU, Southern University and Baton Rouge Community College to work together to address workforce needs, and boosting the public school system.

State Rep. Barbara Freiberg, R-Baton Rouge, said she’s been on five BRAC canvas trips, but there has never been any follow through. “We need to come together [sic] in a very regular basis and work together to achieve things.”

Edgardo Tenreiro, CEO of Baton Rouge General Medical Center said city leaders need to follow Greenville’s lead and have a “hyper-focus and obsession” about improving downtown. “If downtown Baton Rouge is cool and vibrant, there’s nothing we can [sic] accomplish,” he said.

“Are we going to change the narrative about our city and look at the glass being half full not half empty?” Mayor-President Sharon Weston Broome asked.

This was the 11th regional canvas trip, but the first since 2018, when BRAC and city leaders visited Cincinnati. The program started in 2003 and led to visits to Austin, Texas; Nashville; Raleigh-Durham, North Carolina; and Pittsburgh.

[According to John Spain, executive vice president of the Baton Rouge Area foundation] – the city needs to take advantage of the Mississippi River and do something “spectacular,” like the $225 million Audubon Alive nature-themed tourist attraction that was pushed by former Mayor-President Kip Holden but rejected by voters in 2008 and 2009, he said. Getting a major attraction built is hard work that takes time, just like the dredging and deepening of the LSU lakes…

And there it is—the narrative—written before the first travel mile was logged, or note taken in the canvassing of the city of Greenville, South Carolina. Edgardo Tenreiro [BRAC Director] identified the narrative—“a hyper-focus and obsession” about improving downtown. Mayor Broome reiterated the narrative.

Not one mention was made by one of the more than 100 business leaders regarding crime prevention, improving governance effectiveness, or reducing costs of services for parish residents and businesses. Those who live in Baker, Central, Zachary, and the unincorporated areas surrounding Baton Rouge are left with nothing, except paying the costs for BRAC’s “hyper-focus and obsession” on improving downtown.

To emphasize the downtown narrative, the Baton Rouge Business Report on November 7th issued an article entitled “BRAC canvas trip: Does downtown need an updated redevelopment plan?” But in fairness, the article accurately stated, “A focus on downtown is a theme repeated from past canvas trips, of which BRAC has hosted 11.” But it was the article’s second paragraph that astounded me.

“This trip taught me the importance of downtown and if you look at what Greenville has and what Baton Rouge has—I’m not knocking Greenville in any way, they have waterfalls, mountains, but look what we have, we have the Mississippi River, a university, we’re got so much industry in the area, it is absolutely the centerpiece of both north and south Baton Rouge,” said Joey Coco, Forte and Tablada CEO, during a debriefing meeting Friday. “It’s the bridge for all of the things to happen and there is no reason our downtown can’t be like this. When we look at it at night, it’s lit up … it’s safe, you can walk, there are trees, there is parking everywhere … our downtown could be exactly like this.”

But the city of Baton Rouge is not safe. It is a shooting gallery. The homicide trend of the last six years is beyond disturbing—it is frightening. And BRAC has been conspicuously silent regarding the unmistakable uptrend in homicides in East Baton Rouge Parish. 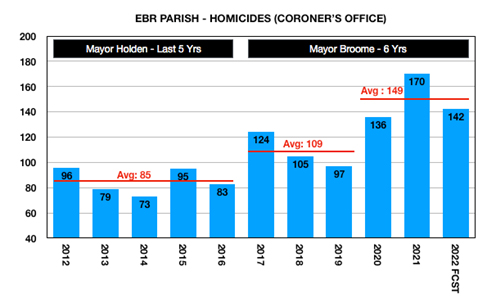 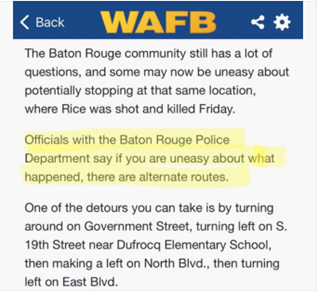 But JR Ball had the courage to “speak truth to power” in his article entitled “Mayor Broome can’t recover from Stormwater-gate”:

Speaking of silence, where has BRAC been on this scandal? Adam Knapp and the chamber’s executive committee need to decide if the organization is a $325,000 [annual] puppet of the administration or the voice of the business community. 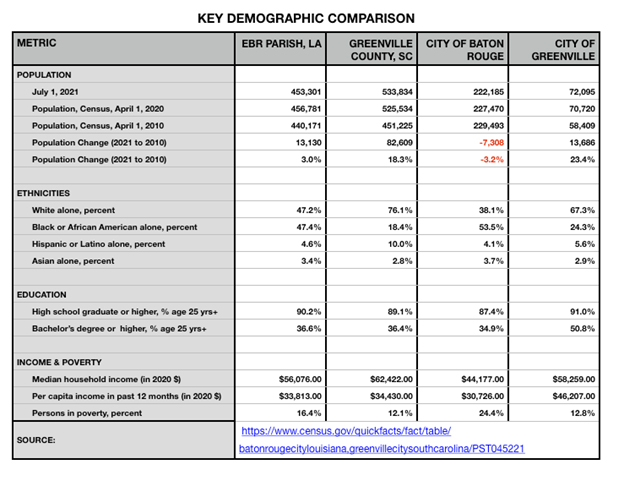 Why didn’t the BRAC canvas team inquire about the best practices employed by the city of Greenville to achieve dramatically better violent crime statistics with lower costs per capita for police and fire department services than Baton Rouge? 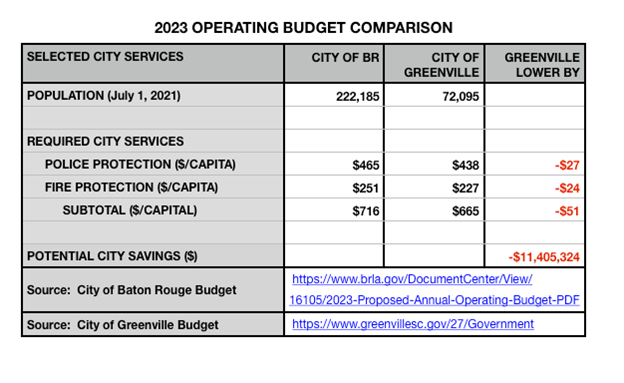 The answer is simply because taxes collected in the unincorporated areas of East Baton Rouge Parish are redistributed to the city of Baton Rouge for services and liabilities. Mayor Broome and Police Chief Paul testified in the city of St. George trial that monies collected in the unincorporated area of St. George are necessary to support BRPD; otherwise it would necessitate a 20-30% BRPD personnel reduction.

The local media news organizations will be mouthpieces for the administration and BRAC to further the narrative to have a “hyper-focus and obsession” about improving downtown [Baton Rouge]. Did BRAC ever work with the cities of Baker, Central, or Zachary for their downtown redevelopment projects, and then ask parish-wide residents and businesses to fund their improvements? Of course not.

You are being snookered by BRAC and Mayor Broome to support the previously failed narratives to fund their “hyper-focus and obsession” on improving downtown.  See this for what it is—another stormwater utility district debacle.

Interested in more news from Louisiana? We've got you covered! See More Louisiana News
Previous Article GARLINGTON: From The Day Of Roe To The Day Of Annunciation
Next Article The LAGOP Officially Announces For Landry, While Kennedy Does… Something