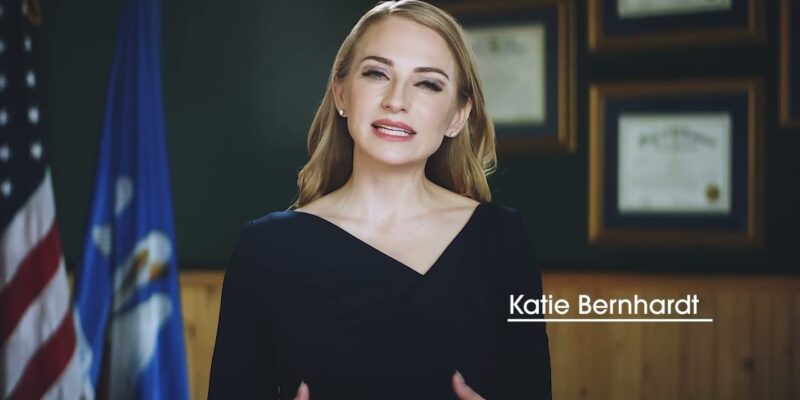 People have been talking about the potential that Bernhardt will get into the governor’s race for quite some time. She’s clearly got some backing, particularly in the person of A.P. Marullo, a real estate developer from Metairie who seems very determined to make himself a political player. Greg Hilburn reports:

Louisiana Democratic Party Chairman Katie Bernhardt is blasting her way into the governor’s race this week with a campaign video featuring her “firepower” with a shotgun.

Though the ad is produced and paid for by the new Team Louisiana Political Action Committee, it features Bernhardt throughout the video, which will go up in the Baton Rouge, Lafayette, New Orleans and Shreveport TV markets beginning Tuesday.

Neither Team Louisiana PAC leader Anthony “AP” Marullo nor Bernhardt would specifically say she is a candidate, but the video clearly is intended to introduce her to voters.

Bernhardt told USA Today Network she will seek consensus from the state’s top elected Democrats to draft a candidate, mentioning Gov. John Bel Edwards, New Orleans Congressman Troy Carter and members of the state Senate and House Democratic caucuses as among those with whom she’ll confer.

“The state deserves good leadership,” Bernhardt, of Lafayette, said in an interview.

Marullo, a Metairie real estate developer who Edwards appointed to the Louisiana Housing Corp. in 2020, said of the ad in a text: “When something causes a stir, I believe that it leads to the types of real conversations that lay the groundwork for change.”

Other than the fact Bernhardt is clearly telegenic, we’re not sure exactly what “stir” this is supposed to cause. Everybody knows there will be a Democrat in the governor’s race; the only question is which one.

For a while, it has sounded like Edwards was going to put Shawn Wilson, the Secretary of Transportation, into the race as the candidate of his political machine. Maybe that idea is losing steam.

Or maybe Edwards and Bernhardt aren’t on the same page anymore.

The thing to remember about Katie Bernhardt is that she’s the Democrat party chair who rigged the endorsement process last year to deny Gary Chambers its imprimatur in the Senate race. If you’ll recall, Bernhardt rigged it so Chambers, Edwards’ man Luke Mixon and Syrita Steib, a minor candidate with no money and no support who managed just two percent of the vote, all received parts of a triple endorsement.

Chambers was absolutely furious about that and publicly trashed Bernhardt over it. So much so that one of the things we’ve heard surrounding a Katie Bernhardt prospective gubernatorial run was that it would immediately draw Chambers into the race. We’ve heard the same thing about East Baton Rouge District Attorney Hillar Moore, whose office has overseen Baton Rouge’s transformation into a shooting gallery over the past few years, getting in. Chambers has high-profile personal beefs with both, and he went through a million and a half dollars during his magical ride to an 18-percent second place finish a year ago, beating Mixon’s 13 percent handily and humiliating the party’s rich white donor elite in the process.

But here’s the thing: we don’t know what this video means.

If Katie Bernhardt is going to run for governor, then why not just come out and say it? This sounds like she’s running, but for crying out loud either poop or get off the pot.

It’s not like this is June of 2022. It’s late January 2023. We’re well past the point where it’s “early” for candidates to jump in. We have four or five of them already, and as we keep noting, the price of poker is over $7 million given that’s the figure Jeff Landry has already raised for the race.

If Bernhardt runs and that induces Chambers either to run himself or to put somebody into the race, something he basically would have to do if he wants to hold on to his street cred and keep his fundraising engine running, then Bernhardt is screwed. Chambers doesn’t like her, and the hard-core Left isn’t crazy about her, either.

If she’s going to run and manage to get the state’s black voters and politicians on board, then it’s going to be a little dicey for her to try to run in this centrist “common sense” lane we’ve been waiting to see someone enter the race to fill.

Because it’s pretty obvious that the two biggest factions in the state which will likely be represented in the gubernatorial runoff are the conservative vote and the black vote. Unless one or both of those factions are split, it’s tough to see something else make it past the primary.

Maybe that’s why Bernhardt dropped this ad. Maybe she’s trying to freeze a moderate Republican, like Garret Graves, on whose decision everyone seems to be waiting, out of the race by positioning herself as someone who can eat into his potential support. Without Graves in the race, the white Democrats think they have a shot at pulling off a repeat of 2015 with Edwards beating David Vitter in the runoff.

Landry isn’t Vitter, though. He’s a much better retail politician, for all of the sniping at him you’ll hear there are no big Jeff Landry scandals like the Vitter-hookers thing to corrode his campaign, and he’s not coming down from the Senate like Vitter was. Plus, this is not 2015; the dynamics of this race are a lot different with a failed Democrat governor about to leave office and the status quo inoperable. Louisiana is in the middle of a rightward move, at least based on the 2022 election results, so another “Look at me, I’m a centrist Democrat!” campaign is far less viable than it was then.

So maybe she isn’t running.

Frankly, we find this irritating. We find Katie Bernhardt irritating, because she’s the same old white Louisiana Democrat we’ve always seen – they’ll say anything to get elected so as to shove their noses into the government trough, and they’re fully invested in the failed status quo we know and hate. This is Kathleen Blanco in a size 2, and it’s going to be a bunch of stupid platitudes without taking a position on anything.

The proof is in that video, complete with its bad acting, obvious green-screen backgrounds and obligatory I’m-Almost-Like-Lauren-Boebert-Or-MTG-You-Guys gunplay. If you can’t even say you’re running, then why bother saying anything?